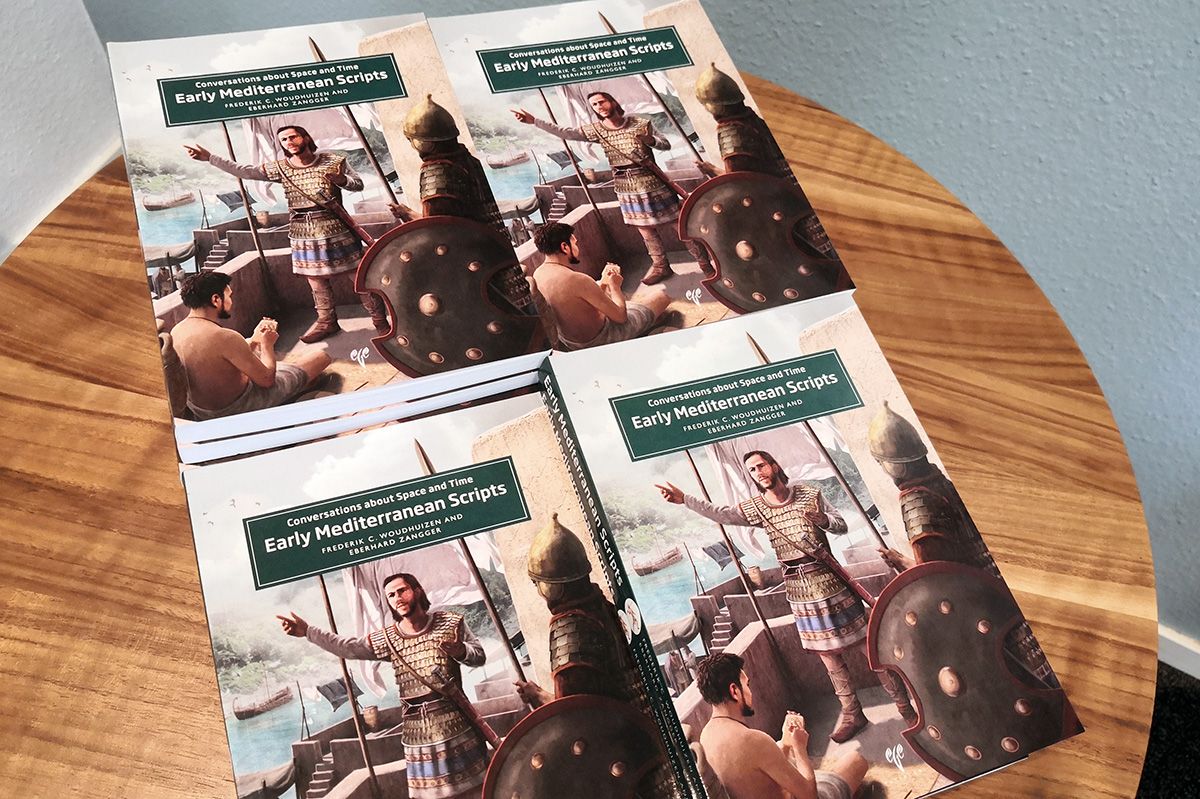 The lifework of archaeologist Frederik Woudhuizen, who died in September 2021, consists of 25 books and more than 100 scholarly articles. Woudhuizen has proposed decipherments for writing systems that are generally considered to be undeciphered, including Cretan hieroglyphs, the Byblos script, Linear A and the Cypro-Minoan script. Virtually all of Woudhuizen’s investigations are interrelated, so that a coherent system of the early Mediterranean writing systems can be derived from them. In order to make this system more accessible and understandable, Eberhard Zangger, the president of Luwian Studies, began interviewing Fred Woudhuizen in the summer of 2020 about various aspects of his research. This book, which Fred Woudhuizen accompanied until it went to press, presents the most important topics touched upon in the interviews. In his own words, Fred Woudhuizen makes connections clear that may not have been apparent before. The reader thus gains access to the way of thinking of a researcher whose work remained largely misunderstood during his lifetime.

How Does Decipherment Work?
What is Mediterranean pre- and protohistory? The perks of interdisciplinary work. Combining the evidence. How Michael Ventris deciphered Linear B – and why Alice Kober would not have succeeded. One can learn from each breakthrough, but a recipe for success does not exist. Each time a different tool kit is required. What comes after the decipherment is more important. Etruscan has the largest number of documents – and all can be read. Challenges in dealing with Luwian hieroglyphic. An overview of the scripts covered in this book. Arthur Evans’s successes and failures. The chronology ought to be fixed.

Waves of Indo-Europeanisation across the Mediterranean
Why Indo-European Studies are not obscure. First movements within the steppe. The horse, wagons and bronze come into use. Pelasgians spread across the Aegean. Two groups of Indo-European speakers disperse at 2300 BC. The Luwians arrive in Anatolia – the Hittites too. Indo-Aryans and Hyksos in the Levant and in Egypt. Greek speakers arrived in Greece as late as 1650 BC. And a multiethnic society thrived on Crete. Conflicts with immigrants are not new. The oldest languages in Iberia, Italy, the Balkans, and Anatolia.

The Earliest Cretan Scripts
First there were Akkadian cuneiform and Egyptian hieroglyphs. Thousand years later hieroglyphic scripts appear in Anatolia and on Crete. There is a relationship! Linear A is Semitic. The Phaistos disc is one late form of Cretan hieroglyphs. Research has lost momentum. A context for Atlantis?

The Lasting Success of Luwian Hieroglyphic
Luwian Hieroglyphic has been known for 200 years. The decipherment was incremental. A bilingue at last. Different ways of transcription. An Old Reading, a New Reading, and an Adjusted Old Reading. The mystery of the large “Beyköy 2” inscription. A sign indicating forgery appears in the real world. Türkmen-Karahöyük and the question of its dating.

Byblos Needs Its Own Script
What was it like in 1700 BC? Why Byblos wanted its own script. Previous attempts at decipherment. Jan Best and Fred Woudhuizen have a discord. Best deserves the credit! Colleagues regard the decipherment as speculative.

A Cypriot Admiral Calls for Help
Long well-preserved documents from Cyprus. What Cypro-Minoan really is. Administrators kept records of goods in transit. Hittite overlords demand taxes. Nothing beats good bookkeeping. Trade routes are revealed. About the value of the acrophonic principle. The Enkomi clay tablet 1687 is a call for help. The Sea Peoples are coming – from Troy!

Origin and Motives of the Sea Peoples
The political situation after 1250 BC. Cyprus is annexed by the Hittites. The Hittites mainly collected taxes. Everybody saw the Lukka as troublemakers. At least nine tribes join forces. Several Sea Peoples come from western Asia minor. Was the central Mediterranean involved? Fred presents his reconstruction; Eberhard sees it differently.

The Etruscans Came from Asia Minor
Etruscan could be read but not understood. Many attempts have failed. One sign comes from Lydia. There is a bilingue – and it is in gold! A whole book in Etruscan. The Lemnos stele is not quite Etruscan. Etruscologists are anxious to establish European roots. Do some Swiss speak Etruscan? Etruscan is a colonial Luwian dialect.

Other Luwian Dialects, such as Lydian, Lycian and Carian
The Hittites have vanished. Phrygians are migrating into Asia Minor. Most people in Anatolia still speak Luwian during the Early Iron Age. Lycian is a Luwian dialect – and so are Lydian, Sidetic and Carian. Is Qλdãnś really Apollo? Minor changes in reading Luwian have a big effect. Sidetic consists half-half of Phoenician and Cypriot signs. Sidetic is closely related to Lycian B. Some questionable scholarship on Carian. Carian contains Cypro-Minoan characters. Scripts do mingle! Greek is overrated.

Etymology or No Etymology – That Is The Question
There are no old-school approaches in linguistics. Using etymology is standard practice in Indo-European studies. Languages are distinct from each other, but they also affect each other. Luwian had a lasting impact after the end of the Bronze Age. How everything was interconnected: an overview of the script developments during the second millennium BC. What are the open questions? The value of historiographic sources. Centum and satem languages. The significance of making mistakes. Where Fred’s interpretations have already been confirmed. Is all European archaeology Eurocentric? Where to go from here?