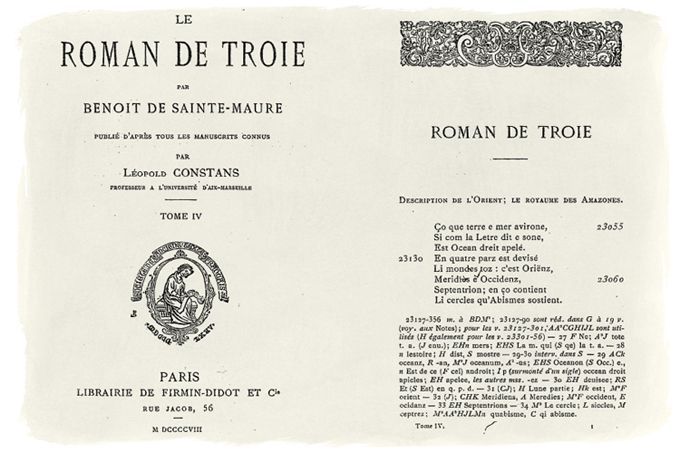 During the twelfth century, Benoît de Sainte-Maure composed the Roman de Troie, a tale of the Trojan War in verse. He explicitly relied on the works of Dares and Dictys, but many details in his text are not included in the versions of Dares and Dictys that we know today. Apparently, a more detailed version of Dares was still available in the Middle Ages. Evidently, the picture of Troy that prevailed in medieval times is very different from the one we have today. How Benoît describes the city also differs from what excavations have brought to light so far.

Benoît de Sainte-Maure (died 1173) was a French-language author from Sainte-Maure in the county of Touraine, which was one of the fiefdoms of the English Crown on French soil. By order of the English court of Henry II Plantagenet and his wife Eleanor of Aquitaine, around 1170 Benoît wrote the Roman de Troie (The History of Troy in Romance Language), a comprehensive narrative of 30,300 verses. It is based on the Historia de Excidio Troiae of Dares Phrygius and the Ephemeris belli Troiani of Dictys Cretensis, the two main sources on Troy in medieval times. From these, however, Benoît only took the basic framework which he then imaginatively and cleverly enriched with love stories, chivalrous battle scenes and scholarly digressions. The Historia destructionis Troiae by Guido de Columnis, published in Latin in 1287, is said to have been based primarily on the Roman de Troie, and from this numerous translations emerged in various vernacular languages of Europe.

Benoît himself names Dares as his source for the material (verse 125–126) up until the destruction of Troy, but he says that this is a very rare book, although the traditional Dares text was readily available in Benoît’s time. He also says that he would adhere strictly to the original, although his description goes far beyond the Dares text which is currently available. These are indications that a more detailed version of Dares existed in Benoît’s day. About 500 years before Benoît (around 660), the chronicle of Fredegar was written. It contains a transcription of the chronicle by Eusebius, who in turn had lived almost another 400 years earlier (around 260–340). Fredegar mentions a text Historia Daretis Frigii de Origine Francorum that is not identical with the Historia de Excidio Troiae of Dares that we know. Thus Benoît may indeed have used a different version of Dares as his main source.

In short, it is quite conceivable that several Greek and Latin versions of the Historia of Dares were extant during the Middle Ages. This would explain the discrepancy between the enormous respect that ancient historians held for Dares and the plain contempt with which historians of the 19th and 20th century treated the transmitted version.

Many passages of Benoît cannot be found in the versions of Dares and Dictys that we know of today. The level and preservation of detail in Benoît’s writing is often remarkable. He wrote in medieval French; a translation into contemporary French was issued by Emmanuèle Baumgartner (1987). It reads (line 2863–3186):

Scholars read in their books what is still today a veritably accepted fact, namely that throughout the world there never existed a city that would have been comparable to Troy. This applies to its beauty, its size, the wealth of raw materials and simply its abundance. … The Trojans had found their city [Troy VIh] devastated, but they built it a hundred times better again by erecting a city [Troy VIIa] of perfect beauty and noble appearance. … High towers were raised around the whole city, made by mixing chalk and sand. … People had built more than a thousand houses, which were intended for the kings and aristocrats. The worst fortified would not have been afraid of all armed forces of the kingdom of France. … The population of the whole surrounding countries had been invited to come to the city and live there. And all these people populated the place so densely and covered it with houses that it would have cost you without a doubt three days and more to walk all around it.

This Troy has little in common with the Homeric Troy and almost nothing in common with the one that has been excavated on Hisarlık. It is a unique, vast and prosperous city – to this day, nothing like this has been found through archaeological excavations in the Troad. A simple explanation, of course, would be that nothing like this could be found because it had all sprung from Benoît’s imagination. But Benoît never tires of referring to his source Dares, of whom he explicitly states that “he is not mistaken,” for example when he gives the names of the six gates of Troy or when he describes the extraordinary richness of the altar in the palace of Priam.

There is nothing in the works of Benoît that compels us to regard the work preserved to us under the name of Dares as the source. The sum of those places where Benoît significantly exceeds our Dares rather testifies a dependence on a more detailed template that would be identical with the original that in turn can be derived from the present Dares text.

In Asia lies a city of the Trojans, this city is called Ilium and Aeneas ruled there. Its people were brave and strong, the men full of unbridled lust for war and always involved in combat until they had subjugated the neighborhood around them. At that point the kings of the Greeks rose with a large army and fought against Aeneas in a terrible battle and many Trojan people died there.

Offside rose Ilion, the main fortress of Troy. Priam had it built for his personal use and – so rest assured – never since then has there been a mortal who would have been able to build something similar. The citadel had been erected on the highest point of Troy, and who designed it really was a master architect! It looked like being carved from a single block of rock that was circular at its base and narrowing towards its tip. But even there its circumference reached five hundred toises [1000 meters] and more – so was Ilion. From there, you overlooked the whole country, and if you saw this rock from down below, it seemed to be so high that you might have thought it reached the clouds.

For yonder walls that pertly front your town, yon towers, whose wanton tops do buss the clouds, must kiss their own feet.