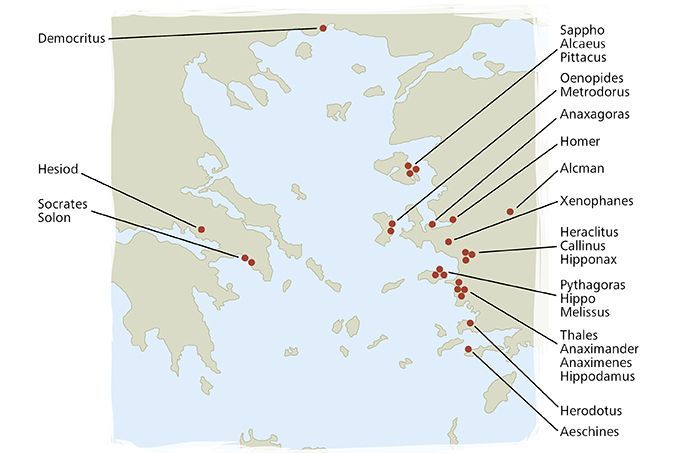 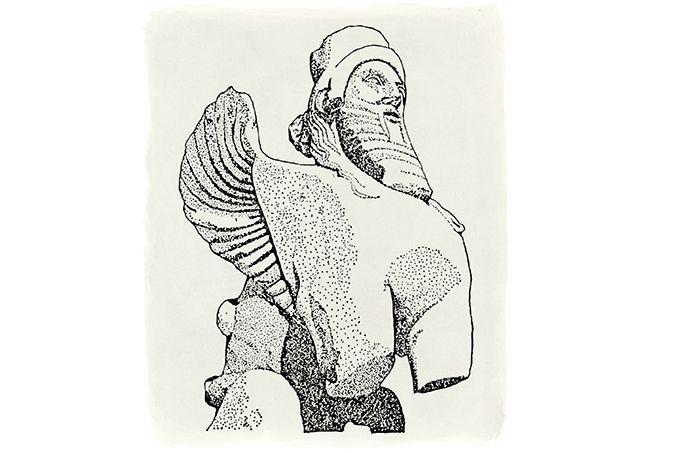 Caria is the name of the region in the southwest of Asia Minor, an area that because of its geographical location has been of significance for a long time. A major trade road to and from Persia intersected with the sea routes across the Aegean Sea at Miletus. The city thrived initially under Minoan, from 1400 BCE on under Mycenaean influence and has been thoroughly researched. Some information about the indigenous people of Caria who had lived in the mountainous hinterland was transmitted in documents. For example, Hittite sources count Karkiša (Caria) among the Luwian petty states of the Aššuwa Alliance.

The mountainous coastal landscape south of the Meander (Turkish: Büyük Menderes) is called Caria. The area offers a wealth of natural harbors, but is only poorly connected to the hinterland. With the exception of Xanthos and Indos, most rivers drain into the Meander and not towards the coast, so that only a few fertile floodplains and coastal plains exist. Nevertheless, in ancient times Caria was at the intersection of major trade routes. This southwest corner of Asia Minor is where the land and sea routes from the Orient reach the Aegean Sea – an area that has been of great strategic importance for thousands of years.

The prime archaeological site in Caria is Miletus. Because Miletus has been explored systematically by archaeologists since 1899, its settlement history is well documented. During the first half of the 2nd millennium BCE (1900–1400), Miletus thrived under Minoan influence. At least the upper class of the society appears to have come from Crete. During this time, rulers and merchants of the old palaces on Crete established trade routes primarily to gain access to metals. Trading posts and colonies around the Aegean were used to protect these routes. After Crete had been taken over by Mycenaean Greeks, Miletus, too, came under Mycenaean influence around 1400 BCE. At about 1300 BCE, the city suffered from a massive conflagration. Hittite documents tell that the Great King Muršili II (1318–1290 BCE) in his second year of reign, i. e. around 1316 BCE, had sent his army to fight against the Luwian core state Arzawa and its two major cities Millawanda and Apaša. Archaeologists today equate Millawanda with Miletus and Apaša with Ephesus.

After Miletus had been rebuilt, the city walls appeared similar to Hittite fortifications, suggesting that the days of Mycenaean influence were over. Later, Great King Hattušili III (1266–1236 BCE) complained in the so-called Tawagalawa letter to the king of Ahhiyawa about a certain Piyama-Radu of Arzawa, who, from Millawanda, led war against western vassals of the Hittites. Researchers are now of the opinion that Ahhiyawa refers to Mycenaean Greece. Thus, it seems that Arzawa, in the middle of the 13th century BCE, had seriously harassed those petty states in western Asia Minor that had clearly sided with the Hittite king. Remarkably, Miletus does not seem to have suffered from the upheavals during the crisis years (1192–1182 BCE).

A Carian domination of the Aegean

The name Caria is derived from the Luwian word Karuwa for “steep land.” In Hittite times, this region was called Karkiša. In ancient Greece, it was called Καρία (Caria) and today in Turkish, Karya. According to the Greek historian Herodotus (1.171), who was from the Carian port city of Halicarnassus, modern Bodrum, “the Carians themselves suppose that they are dwellers on the mainland from the beginning.”

The interpretations of the excavations at Miletus widened the gap in which the Luwian culture had disappeared, for one can hardly find the word Luwian in reports that have accumulated for over a century. The Heidelberg-based archaeologist Wolf-Dietrich Niemeier, who directed excavations of Bronze Age Miletus after 1994, as a matter of principle only distinguished between Minoan, Mycenaean and Hittite civilizations. As a consequence, political maps of the 13th century BCE show an extension of the Hittite Empire to the west all the way to Miletus. There, and only there, it borders seamlessly with the Mycenaean sphere of influence. Such a situation may have existed for a short period of time, but it could hardly have been typical for the Bronze Age. Even during times when Miletus was under Minoan or Mycenaean influence, this influence would only have applied to the geographically isolated city, and not to the surroundings. The Bronze Age lasted for almost 2000 years. During this time the Carian hinterland had, in all likelihood, been settled by predominantly endemic Anatolian peoples who spoke Luwian or a language derived from it at least during the 2nd millennium BCE. Like almost all other regions of Asia Minor, from time to time Caria had been subjected to hegemonic claims of the Hittite central government, only to look for ways to shake it off again.

Today we know more about the actual Carians from historical documents than from archaeological fieldwork. The latter has almost exclusively been done on coastal sites that showed a clear Minoan or Mycenaean influence (Miletus, Müsgebi, Iasos) and/or concentrated on centers or settlement layers from the period of Greek colonization (Stratonikeia).

In Hittite documents, Karkiša (next to Lukka and Wiluša) counts among the twenty-two Luwian kingdoms of the Aššuwa alliance. It had formed during the 15th century BCE to defend its members against hegemonic claims of the Hittite Empire. Although Great King Tudhaliya I (ca. 1460–1420 BCE) convincingly claims to have defeated this alliance, it was the Hittite Empire that disappeared for good 200 years later, while the Luwian culture continued to thrive.

In the Iliad (2.869), Homer stated that the city of Miletus belonged to Caria, that the Carians spoke a language of “barbaric pharynx sounds” and that they were allies of the Trojans. Both Herodotus (1.171) and Strabo (7.2) state that the Carians had previously been called Leleges. According to Strabo (13.59) they had founded eight cities whose ruins display a characteristic masonry and were partly still visible back then. One of these settlements, located a few kilometers inland from Halicarnassus, is named Pedasa (6.20). In Hittite times, the region in the far eastern hinterland of Caria was called Pitasa. During the 6th and 5th century BCE, Pedasa was even more significant than Halicarnassus, its neighboring city.

Carians are often associated with Phoenicians. The terms “Carian” and “Phoenician” seem to be synonymous with foreign and oriental in Homer and Herodotus. Carians were considered enterprising, courageous and sea-savvy. Their maritime achievements were so renowned that they were also known as “sea people,” a fact that makes one think of the Sea Peoples of the Egyptian temple inscriptions. Greek historian Diodor (5.84.4) as well as church writer Eusebius of Caesarea mention a Carian naval supremacy during the late 8th century BCE.

According to Herodotus (1.146) there were no women from Greece involved in the founding of the Greek colonies in western Asia Minor; only men had come and subsequently married Carian women. This means that famous Greek citizens of Carian cities, such as Thales and Herodotus, were half Carian and had Carian ancestors. Therefore, it is not surprising that Herodotus (1.171) considered Carians “by far the most respected of all nations.” Although during his time Greeks ruled the Carian coastal cities, a large part of the population was still of Asian Minor descent and communicated in their native language.

Herodotus (1.171) also states that “the Carians were those who first set the fashion of fastening crests on helmets.” Such crests were the perhaps most important characteristic of the Sea Peoples’ representations at Medinet Habu.

Of these, the Carians have come to the mainland from the islands; for in the past they were islanders, called Leleges and under the rule of Minos … Since Minos had subjected a good deal of territory for himself and was victorious in war, this made the Carians too at that time by far the most respected of all nations.

It was the Carians who originated wearing crests on their helmets.

For Minos was the most ancient of all that by report we know to have built a navy. And he made himself master of the now Grecian Sea, and both commanded the isles called Cyclades … expelling thence the Carians and constituting his own sons there for governors.

The only recently deciphered Carian [has] developed very likely … from Luwian.

The Carians, as well as their neighbors, the Lycians, could very well have been a part of the Sea Peoples.

After Troy was taken, the Carians steadily increased their power and became masters of the sea.

In Asia Minor and even in Libya, the Carians and Lelegians dwelled on for some time. The Lydians, Phrygians, Mysians and Lycians, which had been considered in antiquity to be branches of one and the same nation … founded certain states in Asia, which lived on for centuries.