Civil War on the Greek Mainland 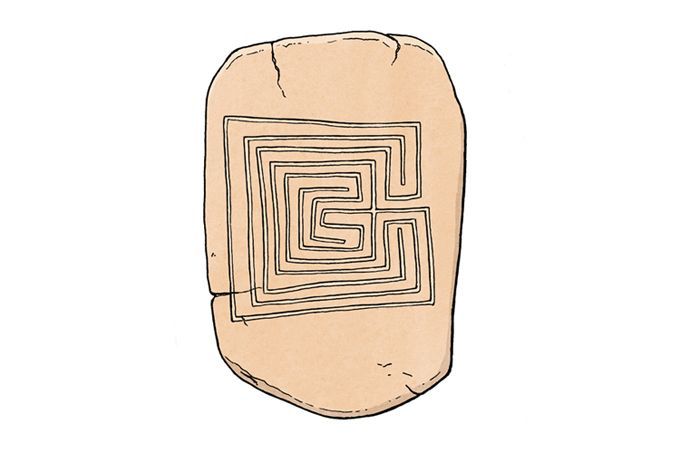 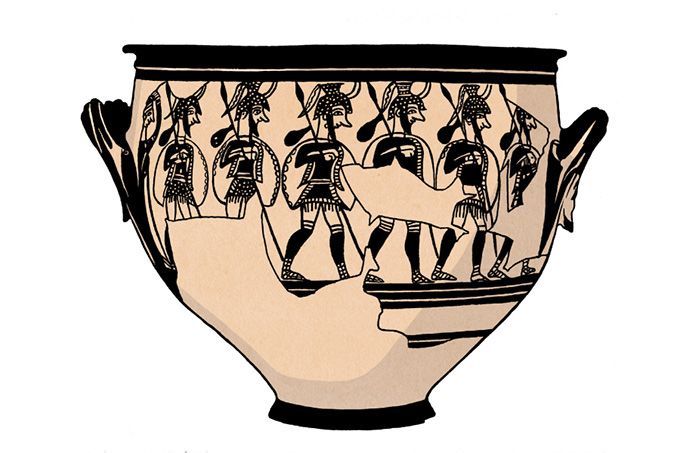 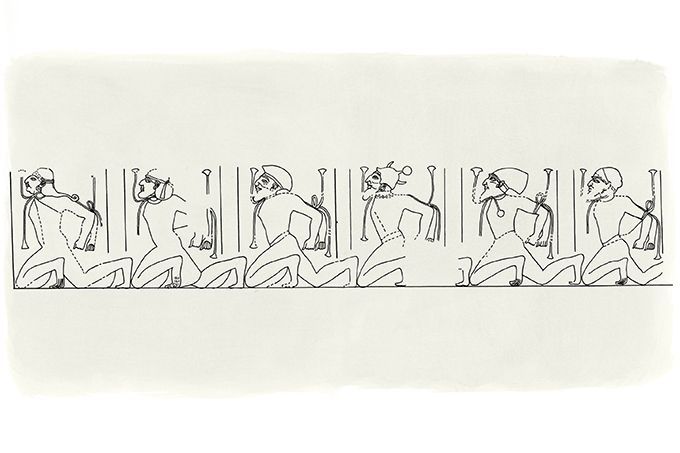 After Troy had fallen, a scribe at the Palace of Nestor at Pylos scratched a labyrinth into the wet clay on the back of a Linear B tablet.
The Mycenaean Warrior Vase from around 1100 BC reflects a memory of warfare.
Captured Sea Peoples at Medinet Habu (according to Sandars).

In the absence of contemporary documents the causes of Mycenaean decline after 1200 BCE are still controversial. Oral traditions provide an explanation that fits the archaeological record. The Mycenaean kings had fought for so long abroad that their power and control at home dwindled. When they finally returned, fighting between the victorious veterans and their deputies at home eventually led to civil war.

After 1200 BCE, upheavals and local destruction on the Greek mainland initiated the end of the heroic age. In many places, various cultural achievements that were closely linked to the palace administration – especially writing – were lost. Some places were destroyed, many completely abandoned, but in areas at a distance from the former power centers new settlements were established. Archaeological excavations indicate that after 1180 BCE several new noble residences were built in the lower city of Tiryns, of which at least one was attached to the outer wall of the citadel. Also, in the center of the Argive plain new residen­ces appear completely unprotected on open ground. The Mycenaean civilization continued for some generations without direction before it eventually disappeared from the scene.

Numerous hypotheses have been advanced to explain the Mycenaean demise, but so far none has been truly convincing. After writing was lost, people transmitted memories for centuries in the form of oral tales, the great Epic Cycle of which only relics are preserved today. Homer used excerpts from this material as a basis for his poetry.

The Mycenaeans could not take advantage of their victory

The Trojan War was not fought to release a kidnapped woman, as Homer tells his audience in such an appealing fashion, but more likely to gain access to mineral resources and trade routes. Troy may not even have been the focal point of the encounter; instead it was merely the scene of the last battle in this great conflict.

Although the Mycenaean Greeks ultimately prevailed against the Luwians, even by capturing Troy, their culture too was doomed to disappear. Parts of the Epic Cycle (Homecomings or Nostoi) tell what happened back home while the Mycenaean kings were fighting at Troy. Their wives and less competent deputies had taken their thrones. When the surviving victorious kings returned, many of these deputies did not want to give up their power. A civil war broke out and progressively consumed one citadel after another.

Books 1–4 and 13–24 of the Odyssey would thus provide a graphic and accurate description of the political conditions prevailing on the Peloponnese around 1175 BCE. Homer suggests that the kingdoms in the Argolid had already fallen into the hands of the rioters. At the royal court of Odysseus in Ithaca, chaos prevailed, since 108 men simultaneously courted queen Penelope in competition for the succession of the legitimate ruler. In Pylos, on the other hand, Odysseus’s son Telemachus was still able to see how Nestor ruled in the traditional manner.

Even in Greece the wave of destruction appears to have continued advancing from east to west. Thus, Pylos – and later Ithaca – may have been among the last palaces to fall into the hands of the insurgents. Linear B tablets from the last days at the Palace of Nestor indicate that people were preparing themselves against an attack. In the Odyssey, the prophet Theoclymenus, who first had fled from Argos to Pylos (and later to Ithaca), described how the last defenders of Pylos may have felt.

There is a sound of mourning in the air; I see cheeks wet with tears. And look, the panels and the walls are splashed with blood. The porch is filled with ghosts. So is the court – ghosts hurrying down to darkness and to Hell. The sun is blotted from heaven and a malignant mist has crept upon the world.

“The sun is blotted from heaven“ has been interpreted as referring to a total eclipse of the sun that occurred in Greece on 16 April 1178 BCE.

They besieged Ilium for ten years, and during this period the domestic affairs of the individual attackers took a turn for the worse. The younger generation revolted, and the ugly and criminal reception they gave the troops when they returned to their own cities and homes led to murder, massacre and expulsion on a large scale.

For also after the Trojan War the Grecians continued still their shiftings and transplantations; insomuch as never resting, they improved not their power. For the late return of the Greeks from Ilium caused not a little innovation; and in most of the cities there arose seditions; and those which were driven out, built cities for themselves in other places.