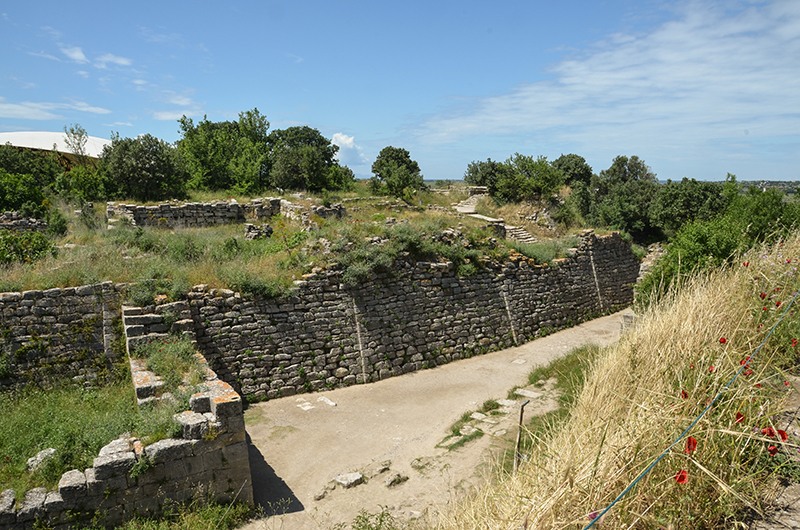 The archaeological site of Hisarlık, commonly identified with Troy, lies on a shallow spur that is overlooking the floodplain of the Karamenderes River. The site was excavated during three major campaigns, under the direction of Heinrich Schliemann and Wilhelm Dörpfeld (1870–94), Carl Blegen (1932–38) and Manfred Korfmann and Charles Brian Rose (1988–2012). The most comprehensive and up to date overview of the habitation history of Troy – even for the Bronze Age – is provided by Charles Brian Rose (2014). The information below rests on this account.

The first habitation in the area occurred at Kumtepe (c. 5000 BCE), five kilometers northwest of Troy, as well as at Beşik-Sivritepe, Gülpınar, Hanaytepe, Alcalıgöl and İşıldaktepe altı. At that time, the coastal embayment still stretched almost to the foot of Hisarlık knoll. “Then, boats were sailing across the Dardanelles and into the Aegean”, writes Brian Rose. From 4500 to 3300 BCE the habitation was interrupted. By 3300 BCE, new occupation began at Kumtepe and Karaağaçtepe, among others.

Towards the end of the 4th mill. BCE, the first settlement arose on Hisarlık, apparently absorbing the inhabitants from the other sites in the area. By the time of Troy II (2550–2300 BCE), the place had developed into a major commercial center and was tied into a trade network that extended from the Aegean to central Asia (Rose 2014, 11). A number of hord finds spanning a period of 400–500 years were retrieved from Troy IIA, most prominent among them is the so-called “Priam’s Treasure”. Our knowledge of the subsequent Troy III–V is rather limited, largely because Schliemann removed so much of the relevant material. The place eventually reached its peak as Troy VI (1750–1300 BCE) and Troy VIIa (1300–1180 BCE) with a fortification wall protecting an area of 20’000m2 (2 hectares).

Engravings that were produced during Schliemann’s digging show to what extend the tell had been truncated, partly by levelling in Classical times but also due to excavations. A profile across the site reveals that the current surface is about five meters below that of the Late Bronze Age. Hence, little of relevance can be expected to be found inside the citadel walls. Therefore, the campaign led by Manfred Korfmann spent almost twenty years investigating the region outside the fortification walls, but still on the Hisarlık knoll in search for a lower town. They did find walls of a few houses that were attached to the western outer side of the citadel, alas not more than that.

On the other hand, drill holes that were produced in the floodplain revealed archaeological material consisting mostly of sherds and fire remains at 4–6 m below the present surface (Kayan 2003, 391; fig. 4). This caused the geoarchaeologist in charge of investigating the floodplain stratigraphy to conclude: “From an archaeological point of view, the area along the foot of the northern slope of Troia is an important one… In the light of these findings we consider that it would be very useful to make an archaeological excavation about 7 m deep” (Kayan 1996, 248). – The most promising area for new discoveries that may shed more light on the size, significance and function of Late Bronze Age Troy lies therefor not on the Hisarlık knoll, but in the floodplain, 5–7 meter below the present surface.