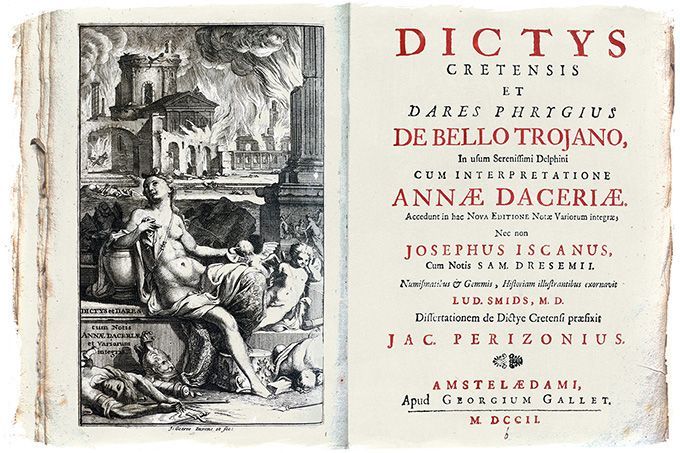 In 1702 Jacob Perizonius established the paradigm that is still valid today claiming that the supposed eyewitness accounts of Dares and Dictys are purely fictitious.

The Latin novel Ephemeris belli Troiani is conceived as an eyewitness account of the Cretan Dictys, who is said to have fought in the Trojan War among the Mycenaeans. His work, which – unlike the Iliad and the Odyssey – does entirely without gods, was at the center of the way Troy was regarded during the Middle Ages and early modern times, together with the work of Dares. According to Dictys, it was the Trojans, not the Mycenaeans, who triggered the war, and the Greeks responded by attacking coastal towns in the northwest of Asia Minor.

The Ephemeris belli Troiani of Dictys of Crete (Dictys Cretensis) is a Latin novel consisting of six volumes about the Trojan War. It is based on a Greek text from the 1st or 2nd century CE that had been lost, except for two papyrus fragments. The Latin version was composed by Lucius Septimius during the 3rd or 4th century CE. The Ephemeris belli Troiani claims to be based on the eyewitness account of the Cretan Dictys, who fought on the Greek side in the Trojan War. His recordings are said to have been discovered by accident in his grave in the year 66 BCE. But it is by no means proven that the account of finding the Dictys originals is authentic. The chronicler, the Cretan Dictys, is said to have accompanied his king, Idomeneus of Knossos, to Troy and to have taken the Greek side, while writing about the siege and conquest of Troy.

Unlike Homer, Dictys makes no reference to divine intervention. This gives his report a more modern and authentic character. The work was rediscovered in the 12th century and it played a pivotal role in the reception of the story of Troy during the Middle Ages up until early modern times. For Byzantine scholars, Dictys was the leading authority on Troy, followed by Homer, Euripides and Virgil. In Western Europe, the ranking was: Dares, Dictys, Virgil and Ovid.

From late antiquity onward, the story of Dictys’s journal, in amusing prose addressed to a knowledgeable and sophisticated audience, came to be taken literally. During the Middle Ages, when Homer’s Iliad was considered lost or was known only in an abridged version, Dictys’s account, together with that of Dares, formed the basis of historical knowledge about the Trojan War. In 1702, however, not quite 20 years after the Ottomans had threatened to conquer Vienna for the second time and 170 years before Troy was rediscovered on Hisarlık, the Dutch classical scholar Jakob Perizonius established the paradigm still accepted today that Dictys’s and Dares’s works were entirely fictitious.

According to Dictys, Troy and not Mycenaean Greece initiated the Trojan War. He says that Priam’s sons had intended to “carry the entire war to Greece” (2.8; Frazer). The idea that Greece, in early times, had been threatened by an aggressor, runs contrary to Homer, but can also be found in Plato (Timaeus 25b).

The Greeks responded by attacking coastal towns in the northwest of Asia Minor. The Greek hero Ajax assaulted neighbors who had friendly relations with Troy. He ravaged the rich cities of Pitya and Zelea, and, “not being content with these, laid waste Gargarum, Arisba, Gergitha, Scepsis and Larissa with marvelous swiftness” (2.27). Ajax also “made an attack against Phrygia, capturing cities and causing general destruction. Within a few days, he returned to camp, victorious laden with booty” (2.41).

According to Dictys, Troy had been embedded in an environment of friendly and prosperous neighboring cities – Late Bronze Age settlements which for the most part have yet to be located. Dictys says that the island of Lesbos was part of Troy’s sphere of influence. Lesbos today belongs to Greece and has been researched archaeologically. Excavations show that the material culture of the Late Bronze Age indeed corresponds with that of Troy. If the historical details mentioned in Dictys’s report were fictitious, with regard to Lesbos they were really well-invented.

Allies from Ethiopia and even India are said to have come to the aid of Troy (4.4). “Many men followed each of the leaders we have listed; their different customs and different languages caused them to fight in disorder and turmoil” (2.35). Coming from the east, the ships of the allies first went to Rhodes “which they soon discovered to be an ally of Greece” (4.4) – another fact that has been verified through archaeological research.

Dictys lists the Trojan allies and distinguishes between political allies, who were contractually obliged to support Troy, and mercenary armies, who had been hired for large sums of money. This type of mutual aid was common practice in the Late Bronze Age, as documents from Hattuša, Ugarit and Thebes indicate.

In his report, Dictys also mentions (2.18) that the Greeks had taken along special trade vessels for taking home booty. The distinction between agile warships that could be drawn onto the beach and bulbous cargo ships is particularly revealing. Many classical scholars have thus far assumed that commercial vessels had been drawn onto the beach, like the ships of the invaders in the Iliad. Actually, heavy commercial ships such as the one known from Uluburun must have moored at a quay, as they would have broken apart had they been pulled onto the shore.

Achilles and his army, seeing at the outset that the inhabitants of Ilium were enclosed by walls, tried to carry on the war outside and, by making raids all round, to take away from them all the surrounding places.

Meanwhile Achilles suspected that the states bordering on Troy were Trojan allies and, so to speak, a Trojan arsenal. Accordingly, taking some ships, he attacked Lesbos and easily took it by storm … Then, as all of his soldiers demanded it, he attacked the wealthy cities of Scyros and Hierapolis with all of his forces; and these he utterly destroyed without any trouble in a few days. Wherever he went, the country was completely pacified and plundered, and everything was thrown into turmoil; anything that might be helpful to Troy was either overturned or destroyed … But Achilles was by no means content with what he had already done. Therefore, he attacked the Cilicians and, within a few days, took Lyrnessos by storm. He filled his ships with much wealth.