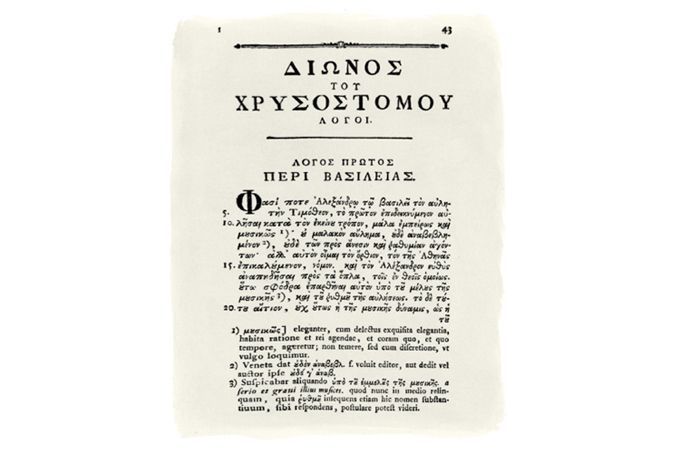 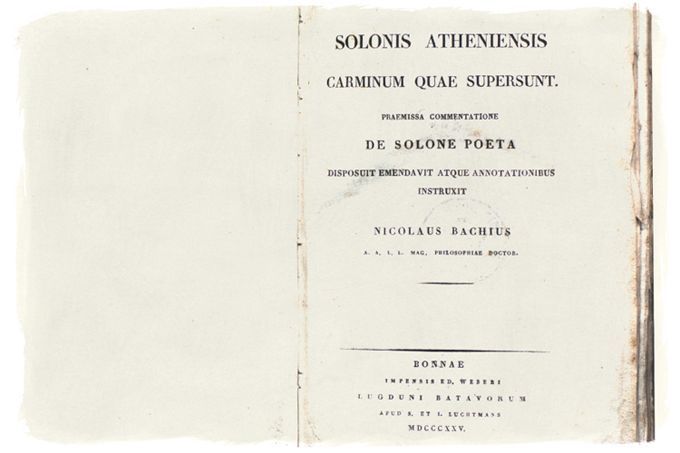 Dio Chrysostom – his nickname means “golden mouth” – was one of the few Greek poets of the first period after Christ. In his speeches he relates, among other things, the events that led to the Trojan War, but deviating from Homer. He describes Troy as the largest and wealthiest city in all of Asia.

Greek poetry was almost non-existent during the first two centuries CE. Consequently, Dio Chrysostom, who was born in Prusa (today Bursa) in northwestern Asia Minor in 40 CE, had almost no contemporaries on par with him when it came to rhetorical skill. Dio hailed from one of the most respected and wealthiest families in Prusa and enjoyed an exquisite education in dialectic, rhetoric and philosophy. He had the opportunity to travel extensively. Initially these were voluntary trips; later, however, he was forced to travel, for he had been expelled from Rome, all of Italy, and his native Bithynia for four decades. Of Dio’s entire body of work, eighty speeches have been preserved; however, two extensive historical works were lost. He earned his nickname Chrysostom, “golden mouth,” quite rightly, through his astute literary essays, moral philosophical teachings, subtle anecdotes and intelligent wordplay.

Hieroglyphic columns in Egypt tell of the Trojan War

In his eleventh speech, Dio provided a detailed description of the events leading up to the Trojan War, which in some respects differs from the popular version. The way he derived the story is noteworthy, too:

I, therefore, shall give the account as I learned it from a certain very aged priest in Onuphis, who often made merry over the Greeks as a people, claiming that they really knew nothing about most things … My informant told me that all the history of earlier times was recorded in Egypt, in part in the temples, in part upon certain columns … He added that these stories about Troy were included in their more recent records.

Onuphis is situated in the Nile Delta in the immediate vicinity of Saïs; that is exactly where Solon, six centuries before Dio, first learned from a wise temple priest about hieroglyphic columns describing a glorious victory of his Greek ancestors over a power in the distant past (Plato, Timaeus 21e–22b).

Dio goes on to describe the city of Troy as the “the greatest of all in Asia” (11.57). He continues to say that “of all cities, Troy was the wealthiest” (11.63) and that during the war against Greece, more and more allies had flocked to support the Trojans (11.79). The Greeks had a hard time during the fighting at Troy. They were plagued by famine and pestilence, and a serious conflict broke out amongst their leaders (11.79). Such statements can also be found in Plato’s report of the Saitian priests about the downfall of a powerful enemy of the Greeks (Timaeus 24e, Critias 120e, Timaeus 25c). Even this city’s historically unique burial under mud (Timaeus 25d) can be found in Dio’s description of Troy: Apollo and Poseidon allowed the rivers to flood the city and to wash it away (11.76).

Dio tells this story to prove that Homer’s Iliad is historically incorrect and therefore misleading. According to Egyptian records, Greeks and Trojans had even agreed on a ceasefire and peace, after they had worn each other down. The surviving Trojan princes Hector and Aeneas later left their homeland to establish colonies elsewhere and rise “to become master of all Europe” (11.141).

It is clear that, parallel to the Greek tradition of the Trojan War, another line of transmission had been preserved in Egypt.

In an era without greatness … Dio, who for good reasons was later called “golden mouth”, was besides Plutarch probably the most fascinating figure, clever and amiable, destined to escape from the world and yet committed to action.

When I asked him [the Egyptian priest] to give this account, he hesitated at first, remarking that the Greeks are vainglorious, and that in spite of their dense ignorance they think they know everything.