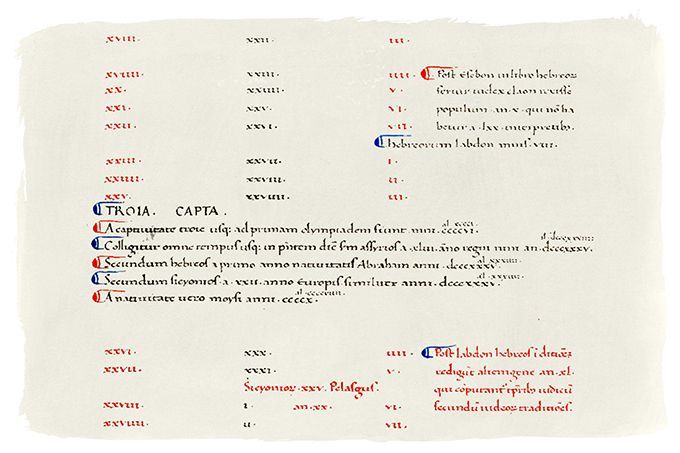 Chronicle of Jerome, as reproduced by Eusebius, all columns for the year 1182 BCE are interrupted by the words TROIA CAPTA (“Troy was taken“).

The chronicle written by Eusebius of Caesarea in the first half of the fourth century CE has long been regarded as a fundamental historical work. In its listing of historical events, one entry especially captures the reader’s eye: In the year 1182 BCE, the entire chronology is interrupted by the line “TROIA CAPTA” – Troy had been taken. Therefore, the Trojan War, according to Eusebius, was undoubtedly a key historical event, even though it had little in common with Homer’s description.

Eusebius of Caesarea (about 260–340 CE) was a late ancient Christian theologian and historian. He had access to many sources, public records, church libraries and private collections including works that no longer exist today. Eusebius wrote a work in Greek entitled Chronicle that for centuries was regarded and widely appreciated as the source of all historical knowledge. The first part of the Chronicle contained a collection of chronologies of different peoples from the earliest times up to the year 325 CE. The second part (the Canons) provides a historical overview from the “creation” up to 325 CE in parallel columns, including a chronology of regnal years and Olympic Games. Hieronymus later translated this Book 2 into Latin.

In one column for each, the chronologies of the respective peoples are listed, including the Assyrians, Hebrews, Sycionians, Argivians, Athenians and Egyptians. In the best manuscripts, all these columns are interrupted across the entire sheet in the year 1182 BCE to make room for the statement “TROIA CAPTA” – Troy was taken.

Apparently, for the chronicler and church father Eusebius it was evident that the Trojan War was a momentous historical event. The fall of Troy is highlighted even more than the birth of Christ. Eusebius’s guide to chronology was used by medieval clerics again and again.

The above entry in Eusebius’s chronology might be expected to put an end to the debate about the historicity of the capture of Troy at the end of the Bronze Age. This, however, is not at all equivalent to the Trojan War as described by Homer. In antiquity, virtually no authors questioned the historic authenticity of the Trojan War, but for most the real conflict had little in common with the epics of Homer.

Given the overwhelming evidence, the tendency of some historians to view the Trojan War solely as an invention of Homer is not convincing. Many authors from ancient Greece mentioned the conflict, and almost without exception did not doubt its historicity. They were, however, highly critical of Homer’s account of the events. Evidence suggests that a conflict involving Troy ended with the city being captured and that this was an event of great political and cultural significance.

The significance of the fall of Troy could not have been better displayed visually. What is more, this is the only historical event standing out like that in terms of the layout. Each reader had to wonder what the matter was regarding TROIA CAPTA, where one could read this story, and who the relevant historian would be.

Then, in the third generation after Minos, the events surrounding the Trojan War, in which the Cretans bore themselves as bravely as any in the cause of Menelaus, took place.

For before the Trojan war nothing appeareth to have been done by Greece in common … The mighty with their wealth brought the lesser cities into subjection. And so it came to pass, that rising to power they proceeded afterward to the war against Troy.