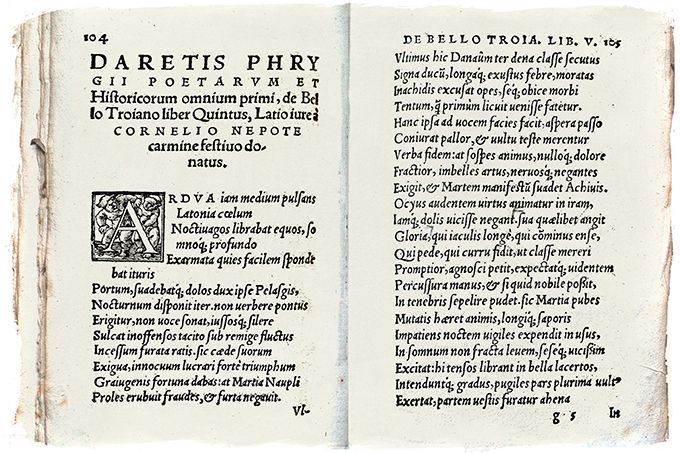 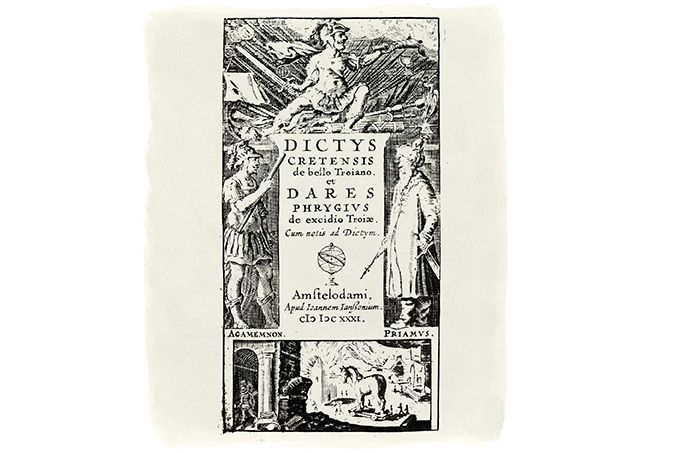 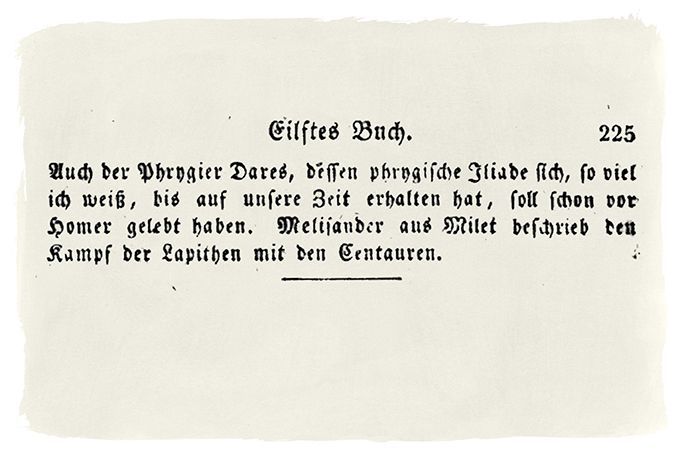 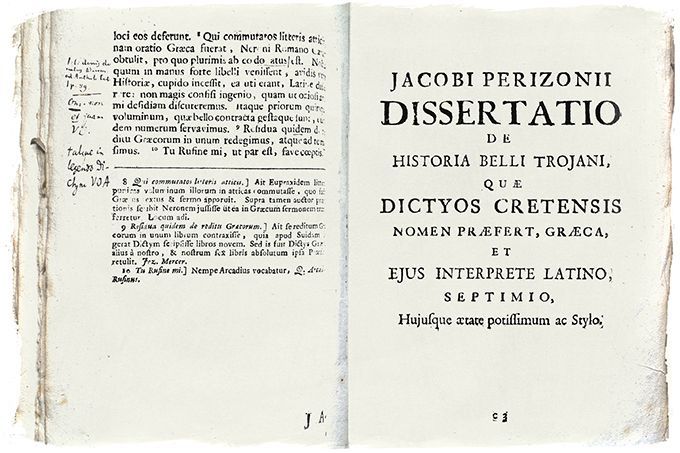 An edition of Dares from Amsterdam from the year 1631.
Edition of Dictys Cretensis and Dares Phrygius from 1531.
“The Phrygian Dares is supposed to have lived before Homer,” says Ernst Karl Friedrich Wunderlich (1839) in his translation of the works of Claudius Aelianus.
Jakob Perizonius‘ treatment of Dictys Cretensis as published in 1702.

Like Dictys of Crete, Dares of Phrygia is an alleged eyewitness of the Trojan War. The Latin novel Acta diurna belli Troiani differs in some respects from Homer, but also from Dictys: While Dictys represents the Greek point of view, Dares represents more the Trojan side. Until 1700, there was avid enthusiasm in Europe for this presentation, but later it was declared a forgery.

The Iliad mentions a Dares of Phrygia, who was a priest of Hephaestus (5.9, 5.27). Under the pseudonym Dares Phrygius a Latin novel entitled Acta diurna belli Troiani appeared in the 5th century CE that allegedly provides an eyewitness account of the Trojan War. Historians today tend to think that this Latin version was based on a Greek original, since the Roman sophist Claudius Aelianus (Varia Historia 11.2) in the 2nd century CE and the Greek writer Ptolemaeus Chennus in the 1st century CE testify to the existence of a Greek book by Dares.

Isidore, bishop of Seville and historian (ca. 560–636), compiled the knowledge of antiquity of the Mediterranean that still existed in the West around 600 CE in his fundamental work Etymologiae. He mentions Dares in one breath with Moses and Herodotus:

Isidore of Seville, The Etymologies 1.42 (Barney)

The content of Acta differs from that of the Iliad in some important ways. It can be considered a counterpart to the Ephemeris belli Troiani by Dictys Cretensis; the latter looks at the same historical events, but from a Greek perspective. Dares, being Phrygian, represents the Anatolian point of view and therefore tends to be more supportive of the Trojan side. Some important moments of the plot in Homer’s epic, such as the wrath of Achilles, the main theme of the Iliad, can be better understood thanks to the background that Dares provides.

Achilles falls in love with Polyxena, daughter of the Trojan king Priam, and asks her mother for permission to marry her. The queen turns to the king, and Priam says that he would only grant permission if a formal peace treaty is signed beforehand; something that obviously did not happen. The description of events is more rational, and history takes its course without intervention from heroes or even gods, which makes it similar to the report of Dictys Cretensis. According to Dares, Troy was ultimately defeated because the city had been betrayed by Antenor and Aeneas. The two had opened a gate at night so that the Greek forces could enter the citadel.

The Luwian petty states formed an alliance and built a fleet

For nearly a thousand years, widespread enthusiasm for the Anatolistic depiction of Dares prevailed in Europe. Then suddenly, shortly after the Ottomans had besieged Vienna for the second time, this passion disappeared. In 1702, the Dutch classical scholar Jakob Perizonius established “once and for all” that the works of Dares and Dictys were “irrefutably” forgeries. This paradigm has since become firmly anchored in humanities textbooks. Perizonius, however, was in every way a philhellene; he had replaced his original Dutch name Voorbroek with a Greek one and would only mention Turks in cases where they were directly involved with Europe. Nevertheless, he was open-minded in many ways and firmly believed in the historicity of the Trojan War. Considering his approach to use more than one source and to find a compromise between unbelief and gullibility, Perizonius probably would have been the first to admit that his findings were only tentative. – What would happen if scholars in ancient philology reconsidered their paradigms from time to time, in particular when new evidence has come up? After all, the physical sciences have gone through quite some transformations since 1702 – and have greatly benefitted as a result.

Possibly one of the most informative passages in the work of Dares is a rather casual remark in Chapter 6:

Europe had bred many warlike men who would come to Greece’s aid, while they themselves, who lived in Asia, had spent their time in idleness and built no ships.

We now know that the reference to Minoan sea power (thalassocracy) in Thucydides (1.4; 1.8), Herodotus (3.122) and Diodorus (5.84.1) can claim to be historically justified. Should Dares’s statement that the Asian side – that is the Luwian side – had no ships (probably with the exception of Troy) turn out to be historically correct, it could illuminate a few pending issues for which excavations alone could thus far provide no answers. Dares says (7): “And so they unanimously decided to ready a fleet and set out for Greece.”
The Luwian states may have possessed thriving economies based on agriculture, metals and trade along domestic routes. The sea routes, however, had been controlled initially by Minoan lords, and after 1450 BCE by Mycenaean, who apparently hired at least in part Canaanite ships, as indicated by the wreck of Uluburun. If the Asians (i. e. the Luwians) had jointly decided to build a substantial fleet in a short period of time around 1200 BCE, it might explain some peculiarities of the Sea Peoples’ inscriptions in Medinet Habu: first and foremost the surprise repercussions that these raids obviously had, and also the fact that the invaders were known by name as former foot soldiers.

The remarkably sophisticated type of ship that the Sea Peoples were using might also be explained in this way. We may safely assume that the Kingdom of Troy had built its wealth in part by controlling the trade through the Dardanelles. Such control could only be exercised militarily. Consequently, the Trojans must have possessed agile ships and excellent nautical skills in order to navigate the straits, if necessary even against the current. Should the Luwians decide to form a military alliance and to build a fleet, it would be fitting to do so under Trojan supervision and using a Trojan ship type as a model. In this way the Kingdom of Troy would have assumed some sort of leadership as far as naval actions were concerned. And this, in turn, could explain why the combined Greek and Luwian armies had gathered, of all places, before the gates of Troy in order to fight the decisive battle. Depictions of the Sea Peoples’ invasions indeed show that many invaders wore feather headdresses. They also bore the name Tkr – for Teucer. Both elements are closely linked to Troy.

Dares attempts to present hard facts – up until the last sentence of his work:

The war against Troy lasted ten years, six months, and twelve days. The number of Greeks who fell, according to the Journal that Dares wrote, was 886,000; the number of the Trojans 676,000.

Even though the specific numbers regarding the victims of the war may have been invented, their order of magnitude is still remarkable.

A tradition was preserved in Greece that a Phrygian, named Dares, had written a narrative of the siege of Troy anterior to Homer.

They say also that Dares the Phrygian, whose Phrygian Iliad I know to be yet extant, was before Homer.

The extant Dares text is nothing more than a poor abridgement of an older larger original, one that in any case was Latin, which might have come into being at about the end of the first Christian century. This Latin original may have been derived from a Greek one.

The “historia de excidio Trojae” by one Dares Phrygius [is] a particularly pathetic product.