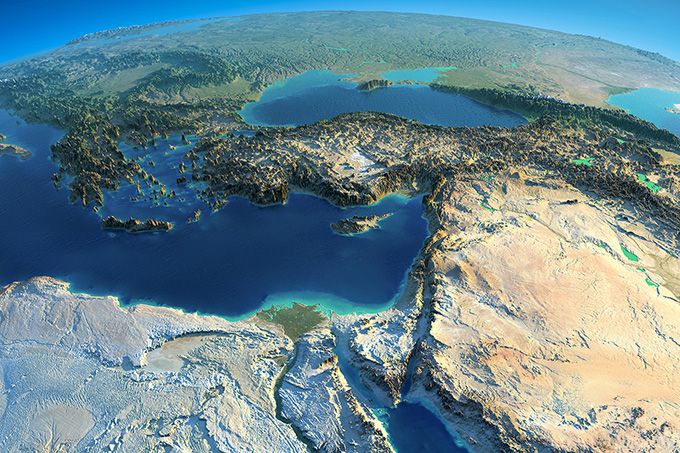 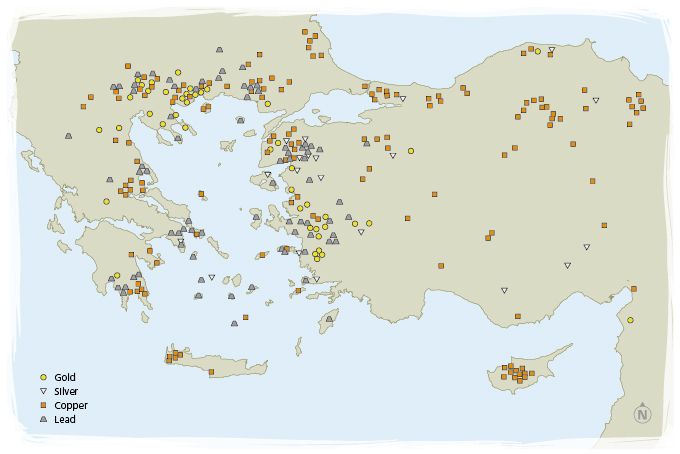 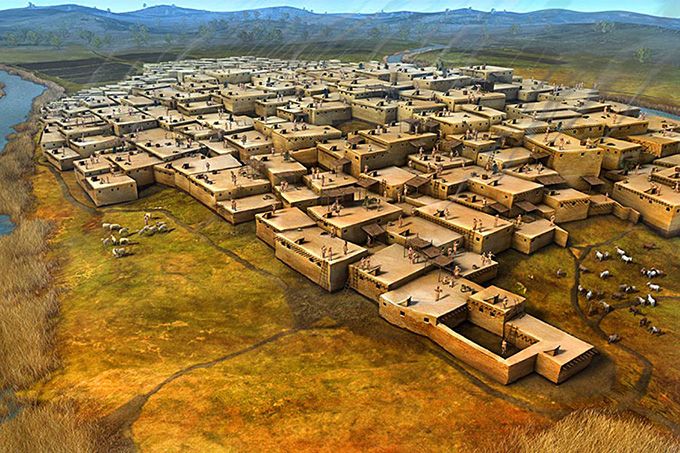 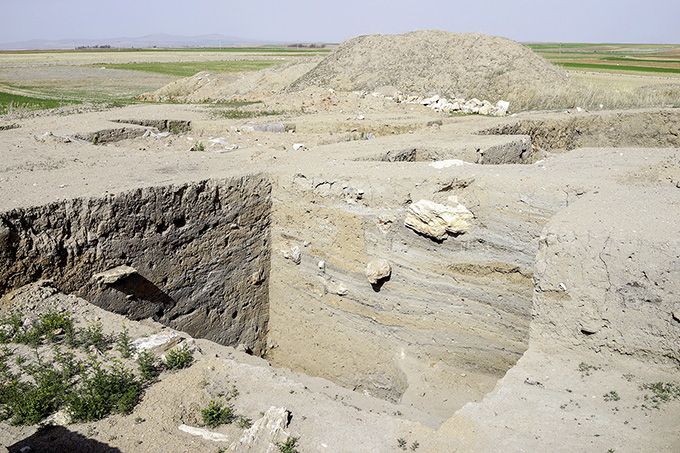 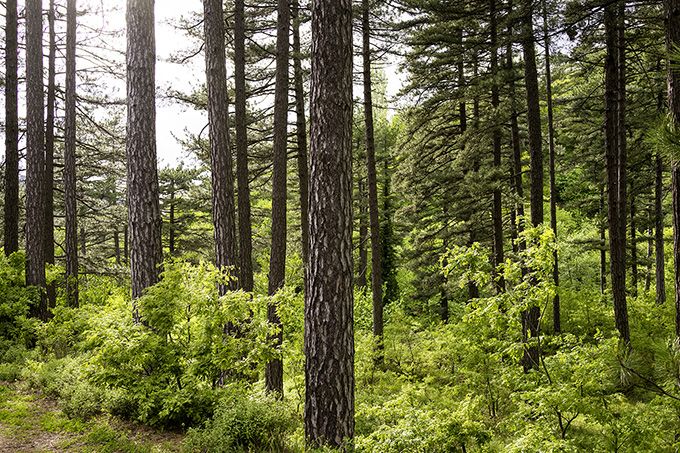 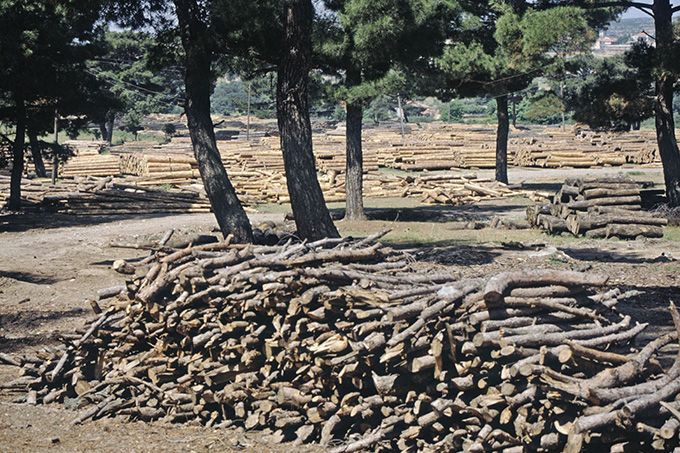 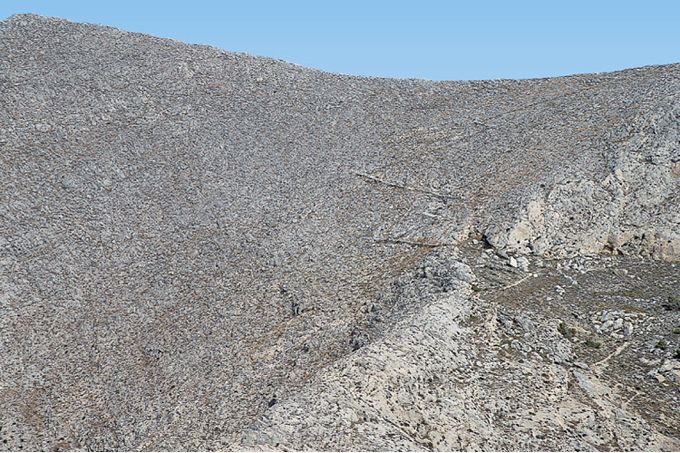 Asia Minor lies at the intersection of the continents of Europe, Asia, and Africa. Inspirations, ideas, and goods from all directions met and merged here. © Anton Balazh/Shutterstock
The Luwian core territory in the west of modern Turkey is particularly rich in ore deposits.
Already during the 8th and 7th millennium BCE, people lived in western Asia Minor in rural communities: here parts of the Neolithic settlement of Çatalhöyük. (© Dan Lewandowski)
Archaeological excavations at Küllüoba have uncovered several meters of stratified settlement remains dating to the Early Bronze Age.
At all times, Mount Ida south of Troy was blessed with dense forests.
Still today much timber is cut near Mt. Ida in the hinterland of Troy.
Today, in many parts of Greece, soil layers have been completely removed. No vegetation can grow on such bare limestone.

Asia Minor not only benefits from its favorable geostrategic location between Asia, Europe, and Africa, but also from a pleasant climate, fertile soil, and abundant natural resources. It is likely that already during the Bronze Age this constellation contributed to wealth and power.

Asia Minor is often called a bridge continent between Asia and Europe, but this does not sufficiently emphasize its uniqueness. Africa is so close that it seems justifiable to claim that in Asia Minor, land routes of three continents connect with the coasts of four seas: the Caspian Sea, the Black Sea, the Aegean and the Eastern Mediterranean. A similarly privileged geostrategic constellation cannot be found anywhere else in the world; this is even more valid considering that the climate is extremely favorable for human settlement.

The abundance of natural resources may have been one reason why it was in Asia Minor that humans founded their first settlements, first raised crops and livestock, and why metal processing and later coinage had their origins in this region. Before the emergence of knowledge work in the 20th century, a region’s natural resources were crucial to the success of the societies on its soil. These resources include the geopolitical situation, mineral deposits, natural stone, year-round precipitation, rivers, forest resources and agricultural land. Asia Minor, thanks to its geological history and geographical location, was well-endowed in each of these categories.

The wealthiest person in the history of the world

No region around the Eastern Mediterranean offers such a large, contiguous stretch of fertile land as the west of present-day Turkey. Nowhere else in the Eastern Mediterranean do navigable waterways reach so deep into the interior, nor are there so many natural harbors, expansive fertile flood plains and endless forests (with the latter being only relics today). A vast area of fertile soil covers the west of Asia Minor. The expansion and lushness of the Gediz valley (called Hermos valley in antiquity) is even somewhat reminiscent of the Nile Delta. Also with regard to mineral resources, there is hardly any other part of the Eastern Mediterranean that is as mineral-rich as western Asia Minor. The ridges east of Troy contain lead/zinc as well as copper and gold deposits, which were already exploited in prehistoric times. Even more famous for its gold was Sardis, a little further south. It was in Sardis that Croesus, proverbially the richest man on earth, ruled.

Today, the distinction between rich and poor is facile. Those with a lot of money are rich, those without are poor. But how was this distinction made before money was invented? Until then, the possession of metals had been generally accepted as a measure of wealth. Metal processing had already begun in the 8th millennium – again it was invented in Asia Minor. The value of metals depended on their rarity and the difficulty of smelting. Lead is widely available and melts at low temperatures. Early on it was processed primarily for jewelry, and later also used as a substrate for correspondence. Copper combined with about 10 percent tin makes bronze, the eponymous metal for the Bronze Age (ca. 3000–1200 BCE in the Eastern Mediterranean). Bronze was used for weapons and tools. Silver came from both silver mines as well as from the lead and copper processing and was used for jewelry, as it still is today. Gold production was directly overseen by the royal courts. Even more valuable than gold was iron, whose value around 1800 BCE was forty times that of silver. Brass (copper and zinc), too, may have been regarded as particularly valuable. The natural amalgam (e.g. the mineral aurichalcite) occurs only rarely. Small objects made of brass (orichalkos in Modern Greek) that contained up to 17 percent zinc were in use on the island of Lesbos, just south of the Troad, as early as the 3rd millennium.

It comes as no surprise that some kings with rich mineral resources in their realms were able to become famous and powerful. The comprehensive map showing the distribution of mineral resources available during the Late Bronze Age, both in Greece and in Asia Minor, indicates three regions that were particularly rich: the Troad, the region around Sardis and Greek Macedonia. Each of these regions produced a ruler who occupied a special place in history: Priam, Croesus and Alexander the Great.

It is clear that nowhere did cross-cultural contacts play out more dramatically than in western Anatolia in the second millennium.

Anatolia is a land blessed with abundant natural resources, including a wealth of mineral deposits and abundant forests, the two elements necessary of a major metal industry.

The increasing use of metal as a material for weapons, tools and jewelry implies the possibility of its hoarding, and thus the accumulation of wealth as an essential basis of the emergence of a social upper class.

A large number of copper, lead and gold deposits is known from the Biga peninsula [Troad] and along the Anatolian west coast.

In the Troad, above the territory of Abydos is Astyra [27 km NE of Troy], which now belongs to the Abydeni, a city in ruins, but it was formerly an independent place, and had gold mines, which are now nearly exhausted.

Near to Andeira [80 km SE of Troy], there is a stone that becomes iron when burned, and then, if it is heated with a certain earth in a furnace, zinc separates out, and this, when copper is added, give the “mixture,” which many call orichalcum.