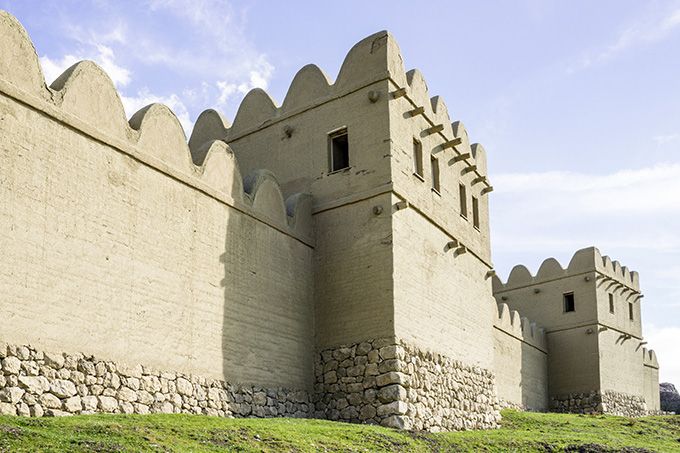 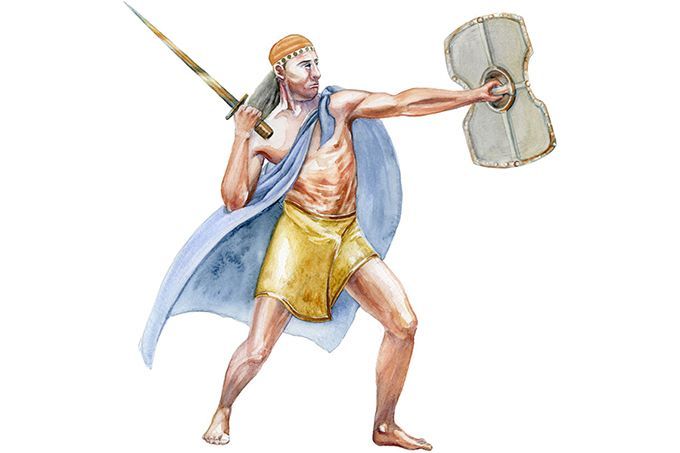 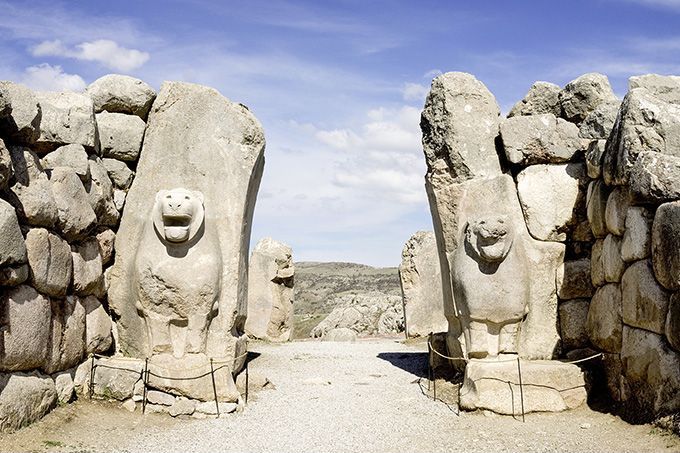 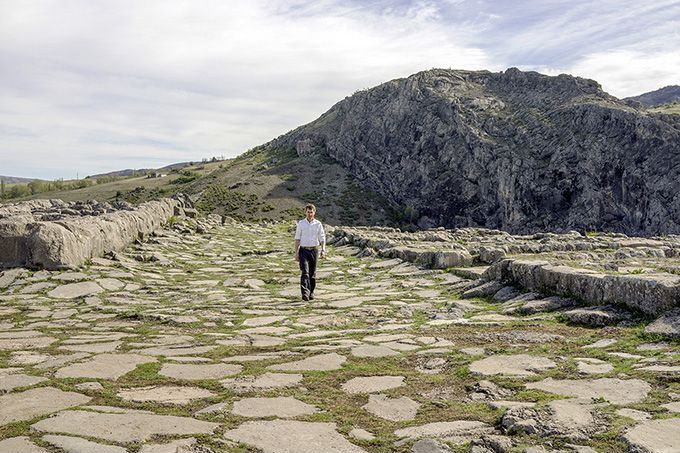 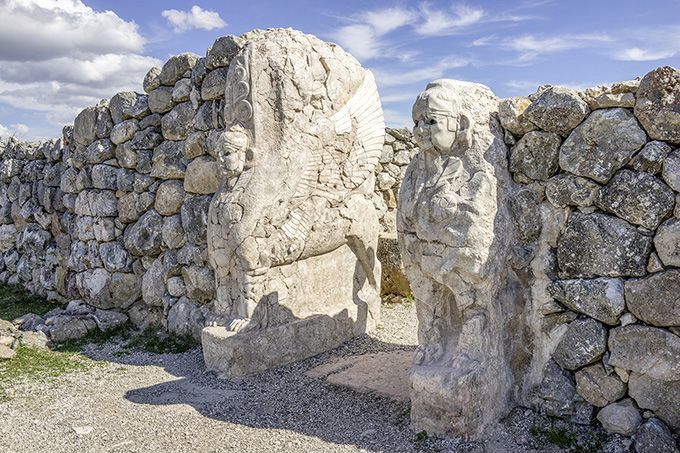 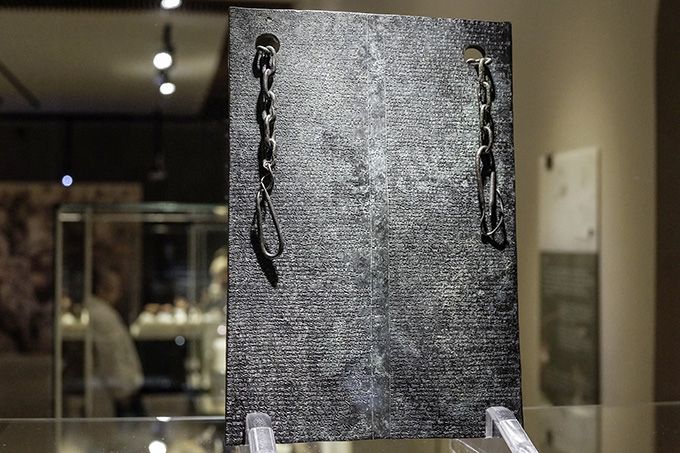 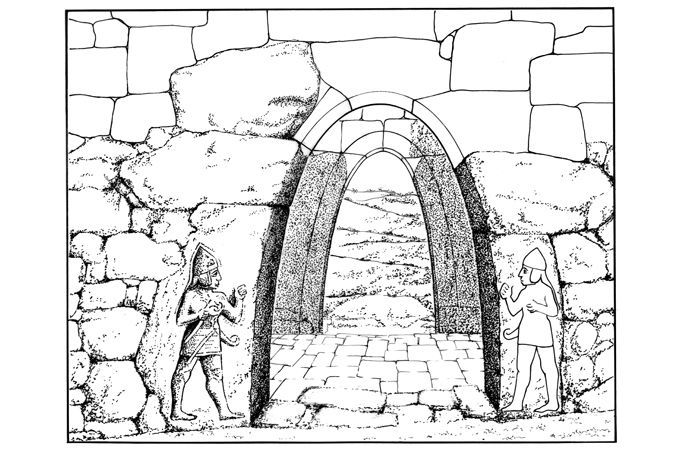 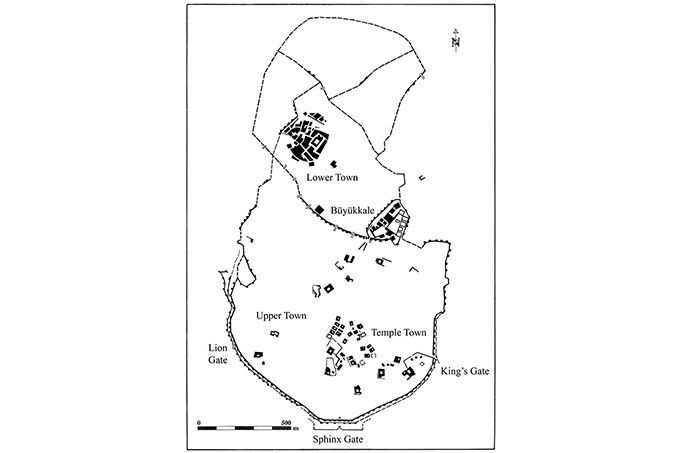 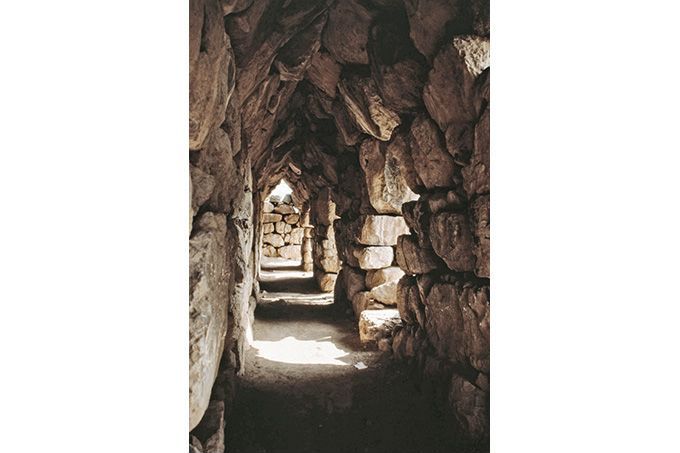 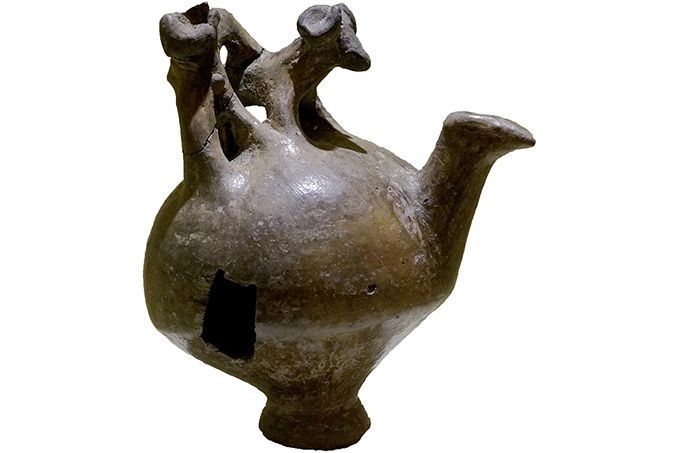 Reconstructed wall section of Hattuša, the Hittite capitol 150 km east of Ankara.
Members of the Hittite people possess a pale skin and a classic profile. Men wore loincloths and coats that had to be knotted around the shoulders. (© Rosemary Robertson)
The Lion Gate at the southwest side of the upper city of Hattuša.
Hittite street in front of the Great Temple at Hattuša (photo taken in 2014).
Two sphinxes on the inner doorway at the highest and southernmost point in the city fortifications of Hattuša.
Bronze tablet from Hattuša, found in 1986, with a treaty dating to 1235 BCE between the Great King Tudhaliya IV and Kurunta, the King of Tarhuntašša.
Reconstruction of the inside of the King’s Gate of Hattuša. It is a double gate, showing a half-relief of an armed warrior, 2.25 m tall, on one side. (© Rosemary Robertson)
In the 13th century BC, the Hittite capital of Hattuša was all around protected by fortress walls. (© Rosemary Robertson)
The architectural style used for the Mycenaean citadels (shown here the eastern gallery of Tiryns) resembles the one customary in Asia Minor.
Hittite cult vessel ─ it is to be filled from the bottom and then turned upside down.

The Hittite civilization in Central Anatolia gained its significance mainly due to a variety of vassal states, over which the Great King ruled from the capital of Hattuša. The empire reached at times an impressive size; however, it was often jeopardized by aggressions from neighboring states as well as internal struggles. Today, the Hittites are treated as the ultimate prehistoric culture of Asia Minor. In fact their reign lasted only about 400 years, whereas the Bronze Age extended over almost 2000 years.

The exact origin of the Hittite people is unclear. They probably first settled in Central Anatolia about 2000 BCE and then mingled with the local Hatti people in the area. Until around 1700 BCE, the indigenous Hattian princes managed to preserve their supremacy, but conflicts with the Hittite newcomers frequently erupted.

The actual Hittite dynasty commenced around 1670 BCE. From the mid-16th century BCE the capital of the Great Kingdom was Hattuša in northern Central Anatolia. The city has been excavated since 1906 and became famous for its archives. Archaeologists recovered over 33,000 clay tablets and fragments which originated there.

The Hittite Great Kingdom was ruled by an emperor, under whom were a large number of vassal kings. These belonged, for the most part, to the dynasties reigning over the surrounding regions; they had to swear an oath of loyalty to the Hittite emperor. The rulers of Egypt, Babylonia and Assyria mostly considered the Hittite emperor as their peer, with whom they maintained diplomatic contact and trade relations, but with whom they also, if necessary, fought for supremacy. Since the Hittite Empire had a common border with Egypt on Syrian soil, friction between Hatti and Egypt arose too.

The Hittite Great Kingdom ultimately collapsed around 1190 BCE. Documents suggest that the military situation had worsened on several fronts and that the country suffered from famine. Uprisings of the population or power struggles among the vassal kings are likely to have occurred as well. With the fall of the Hittite Empire, the cuneiform writing tradition ended in Asia Minor and no new power center emerged in Central Anatolia. People living in the region returned to a simple agricultural, even partly nomadic lifestyle.

Hittite aristocrats appear to have essentially been a leadership caste that defined itself on a political and administrative system. The indigenous, largely Luwian and Hattian population, continued to use their languages and customs, even under Hittite dominion. The nature of Hittite rule can thus be compared to the administrative system of the Ottoman Empire, to Yugoslavia under Tito or to the former Soviet government. Central administrations come and go, but languages and customs of the local population are rarely affected by such changes.

A third caveat concerns the size of the Hittite Empire. In recent years, maps typically show the maximum expansion of the empire during the 13th century BCE. However, the kingdom reached this extent only through treaties with vassal states and even then only for a short time. Hittite rule was characterized by the fact that neighbors were enemies most of the time. In particular the petty kingdoms in the west caused enduring friction. In the north, the Kaška too were archenemies who repeatedly raided Hittite territory to plunder.

It is quite conceivable that within the core area of the Hittite Kingdom, the original Hattian and Luwian people were gently coerced to form a state that was united by a central management and policy. Even so, they preserved their languages and customs – which may be why so many Luwian loanwords and texts appear even in the capital. Petty kingdoms on the periphery were tied through vassal treaties to be loyal supporters. In all likelihood, neither the native local people nor the vassal states were always happy about this situation. This may have caused constant political friction – and thus contributed to the two demises of the Hittite Empire – of which the second one was forever.

From the way Hittite scribes use Luwian words in Hittite texts, it appears that Luwian largely served as a colloquial language within the Hatti kingdom.

It seems to be sure that the rule of the Hittites never reached the western borders of Asia and certainly not up to the Hellespont.

The Mediterranean was never the focus of the interests of the great kings of Hatti further to the east, which were firmly directed towards the mountainous, mineral-bearing interior of western Asia.