Hydro Engineering during the Bronze Age 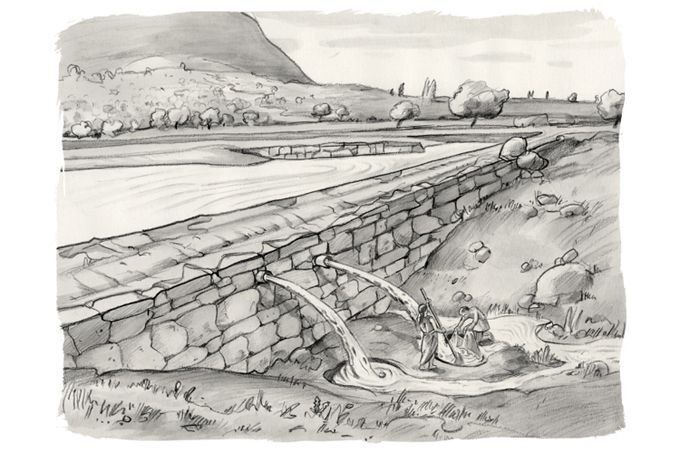 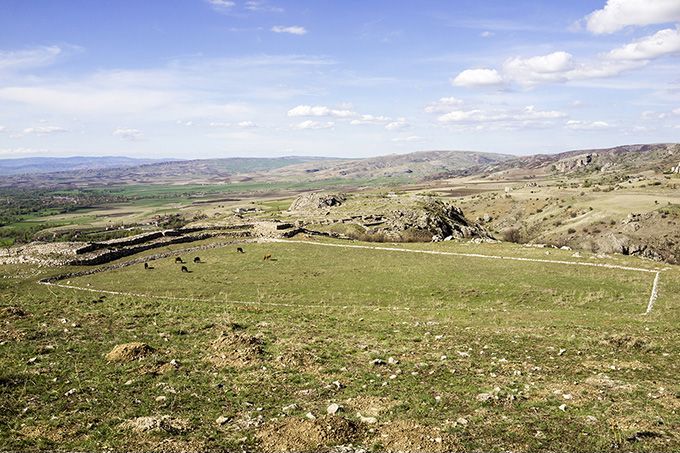 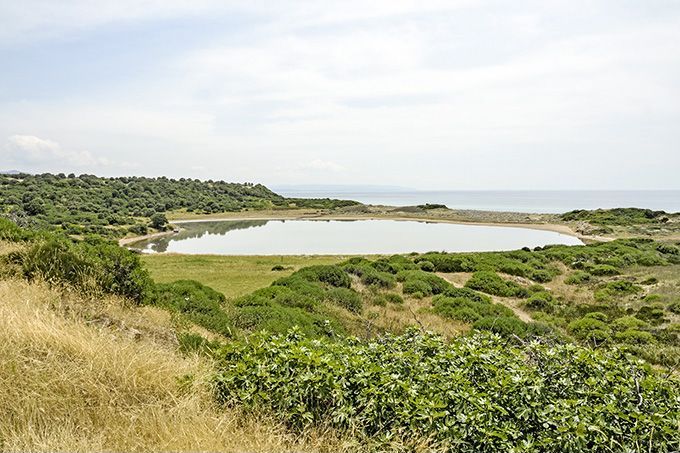 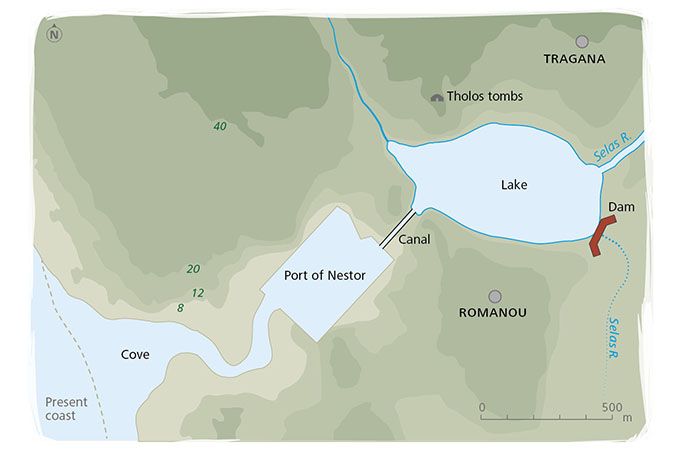 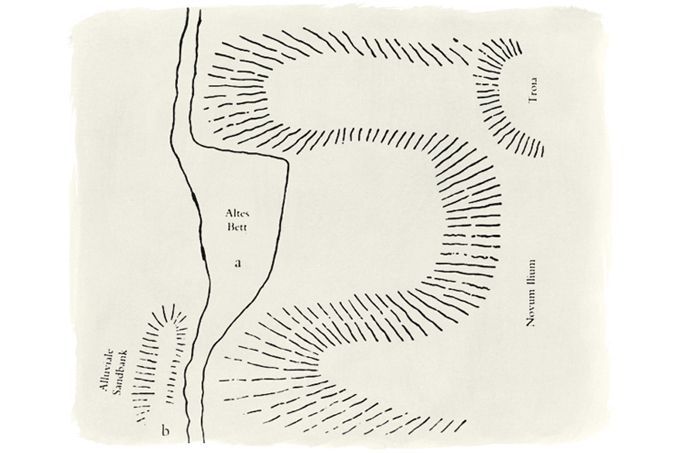 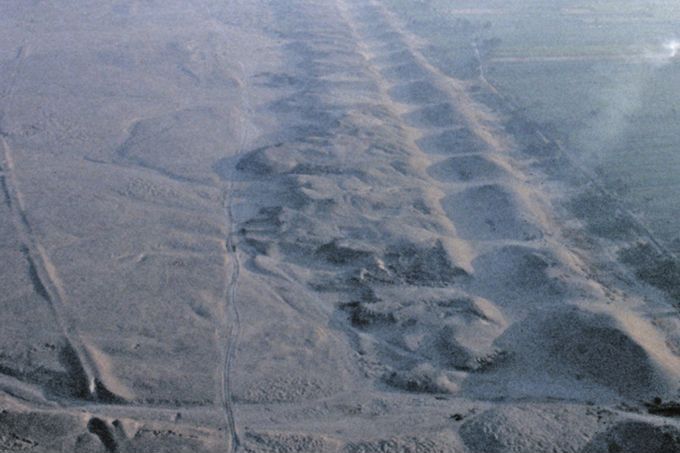 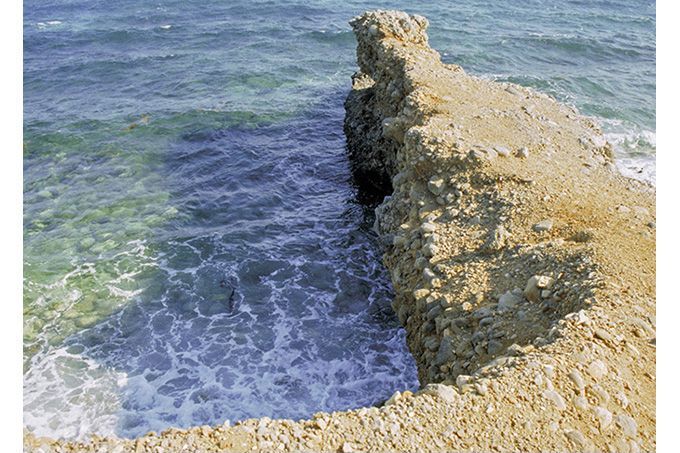 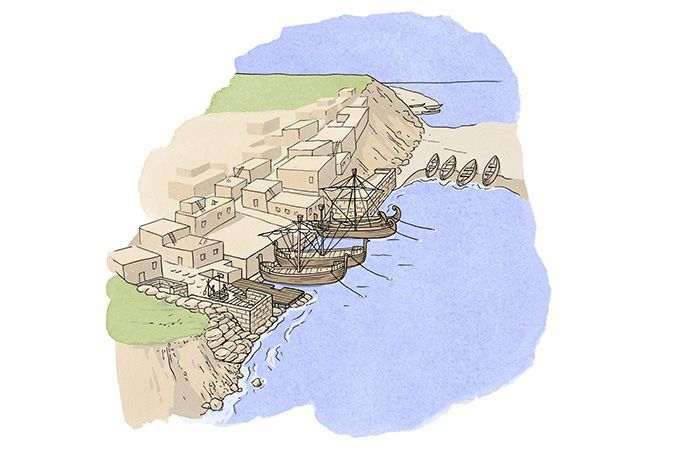 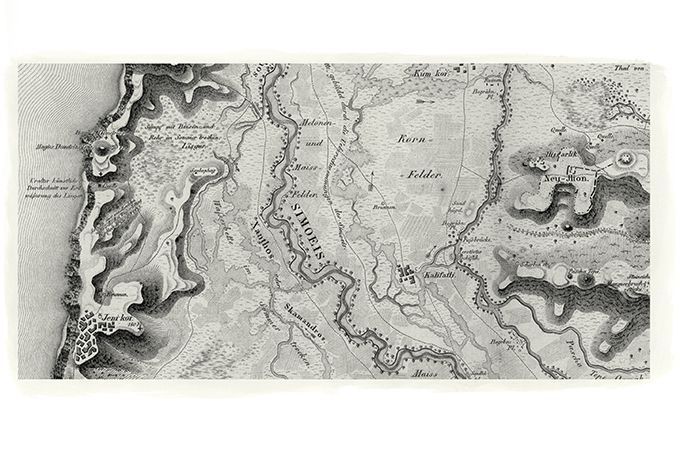 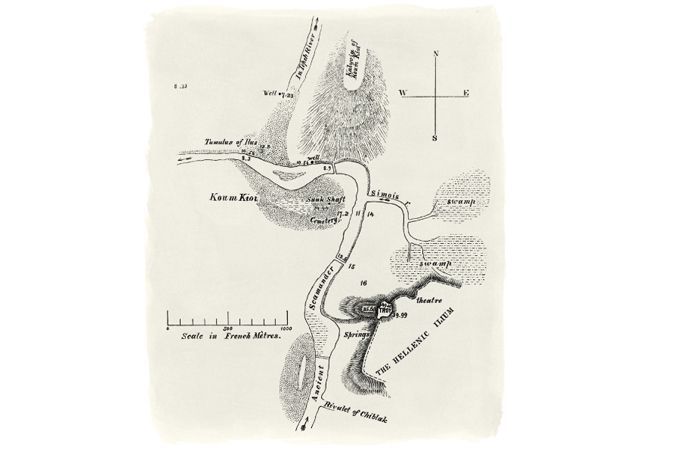 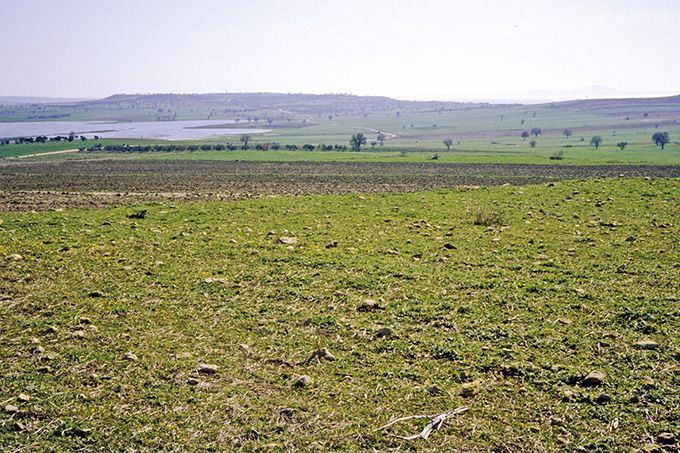 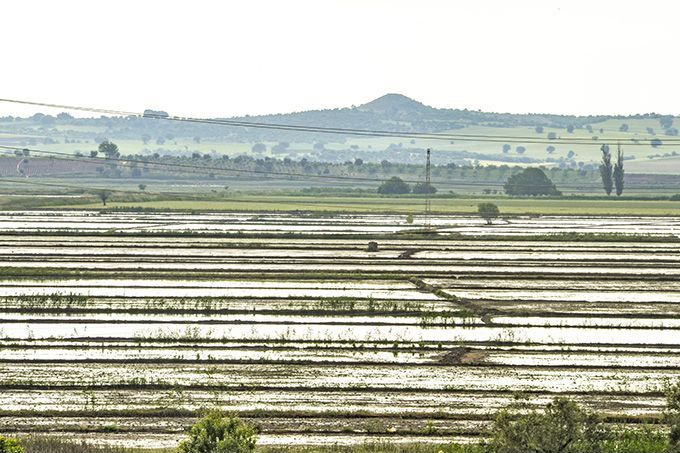 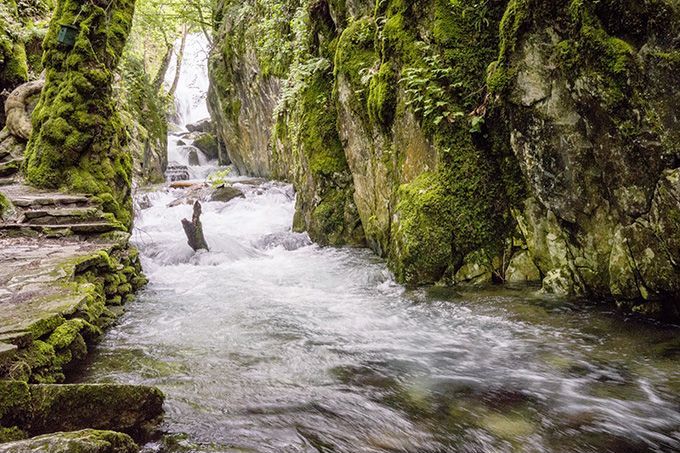 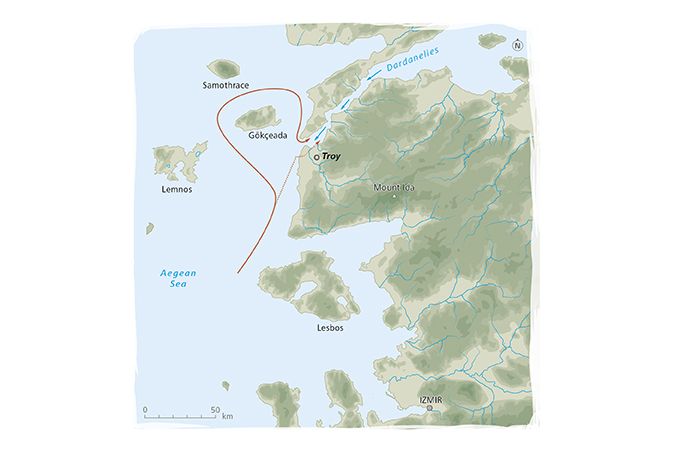 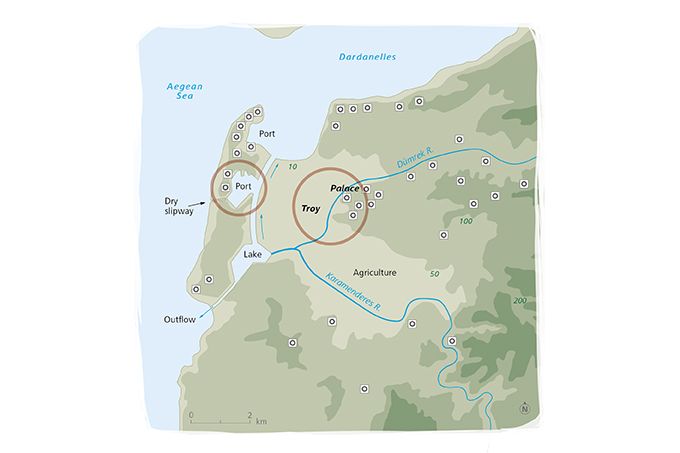 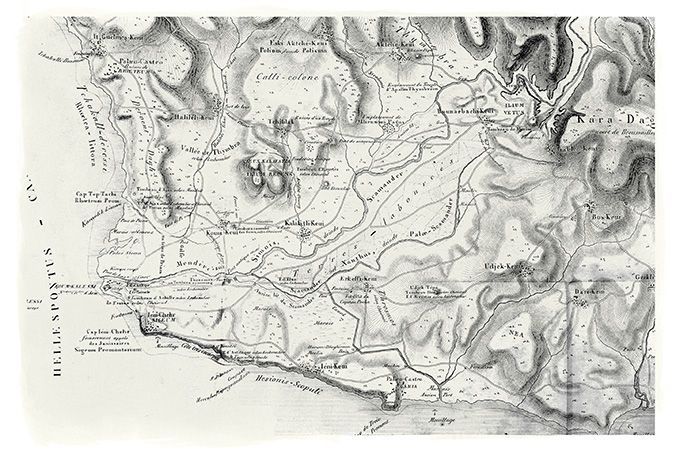 Artistic reconstruction of the dam in Mycenae.
Artificial reservoir dating back to the Hittite period (re-excavated) near Alaca Höyük.
Silted artificial pond within the Southern Citadel of Hattuša. The stone row indicates the outline.
Partially silted artificial harbor basin of Alexandria Troas; approximately 30 km south of Troy.
After the collapse of the Mycenaean kingdom the Port of Nestor and the artificial reservoir silted up quickly.
Schliemann’s sketch indicates the border between Ilion and the plain. He identified the old course of the Scamander, a small harbor basin, and a sand heap (with spoil from digging canals).
Aerial view showing the edge of the 2 square-kilometer wide artificial harbor basin (right) at Birket Habu and sand heaps (center) from the time of Amenhotep III in Western Thebes.
Uniform rectangular incisions into the coast at important Minoan settlements on Crete suggest that wharves made of wood may have once been there. Pictured here is Gournia.
Reconstruction of a Late Bronze Age harbor as they are likely to have existed on the coast of Minoan Crete.
The topographical map of the plain of Troy by Thomas Spratt and Peter Wilhelm Forchhammer from 1850 exhibits canals and spoil heaps.
This map from Schliemann’s Ilios shows the Scamander flowing past the foot of Hisarlık.
The Bronze Age water regulation systems of Troy have long since silted up. Sometimes during spring, bodies of standing water appear on them, so that the outlines of the basins become visible again.
Wetlands at Pınarbaşı near Troy could possibly be relics of Late Bronze Age water engineering projects.
One of the source rivers of the Scamander at Mount Ida.
A few hundred meters of transport overland at Troy would have saved 50 km journey at sea when entering the Dardanelles.
Hypothetical reconstruction of the water management system in the plain of Troy at the end of the Bronze Age.
Antoine François Mauduit considers the ancient channel to Besik Bay as the old exit of the Skamander in the time of Demetrius of Skepsis. (p. 132, 215)

The nearly two-thousand-year long success of the settlement of Troy rested partly on its favorable geopolitical position at the entrance to the Dardanelles. Evidence of artificial interference with the natural watercourses indicates that the people of Troy undertook elaborate hydraulic engineering projects – something not uncommon in the late Bronze Age. Based on the still visible canals and basins, it should be possible to reconstruct the canals and port facilities of Troy.

Excavator Manfred Korfmann was convinced that Troy’s success was partly based on its favorable strategic location at the entrance to the Black Sea. Strong northern winds prevail at the Dardanelles, which would have rendered the strait impassable for Bronze Age ships. According to Korfmann, skippers had to wait for favorable conditions in the port of Troy and, most likely, paid port and pilot fees. The excavator and his former team’s ancient philologist, Joachim Latacz, thought that the natural beach in Beşik Bay, around 10 kilometers south of Hisarlık, had served as the port. According to them, even trade vessels were simply drawn up onto the beach.

Geomorphological studies of the plain of Troy have shown that the current bed of the Karamenderes River is not identical with its old course. The whole plain is crisscrossed by dry river beds and artificial canals. Peter Wilhelm Forchhammer, at the time professor of geography at Kiel University, and Thomas Spratt of the Royal Navy had conducted surveys in the plain as early as 1839. Forchhammer’s records, along with the map of the area prepared by Spratt, provide excellent insights into the topography of the landscape in the middle of the 19th century. It contained various silted-up waterways and heaps of spoil from digging. Schliemann, too, was convinced that the Trojans had diverted the Karamenderes River in order to prevent ephemeral flood.

A thousand years after the end of Late Bronze Age Troy, a sprawling city sprung up again in the same region: Alexandria Troas. Situated 30 kilometers south of Hisarlık, it possessed an important feature: two artificial port basins that are still visible today and even filled with water. Constantine the Great (272–337) is said to have considered making Alexandria Troas the capital of the Roman Empire, but eventually he opted for Byzantium – which later grew into Constantinople and ultimately became Istanbul.

Such elaborate hydraulic constructions are also known from the Late Bronze Age. These include artificial ports in Syria and Palestine that remained sediment-free due to skillful channeling of the water flow. In the 14th century BCE, in western Thebes on the Upper Nile, Pharaoh Amenhotep III ordered the construction of an artificial port, two square kilometers in size. We also know numerous hydro-engineering installations from Mycenaean Greece. Chief among them are a still-functioning river diversion near Tiryns, the drainage system of Lake Copais west of Thebes and the Port of Nestor at Pylos.

However, nowhere is there greater evidence of human intervention in the natural courses of rivers as those which can be found at Troy. Characteristically, the river crossing the alluvial plain bore two names in antiquity. The gods called it Xanthos (“yellow river,” Iliad 20.74). Later, the inhabitants of Troy are said to have diverted the river artificially, so that it was henceforth called Skamma Andros (Skamandros, Scamander), “because the digging (skamma) of the man (andros ekeinou) siphoned the Xanthos out of the earth” (Eustathius, Commentarii ad Homeri 20.74).

It is absolutely possible to determine what the ancient course of rivers and the structure of port facilities of Troy looked like and how they functioned. Such a technical reconstruction would have to be based on canals and basins that are still recognizable in today’s landscape. These could then be compared with the Late Bronze Age hydraulic installations known from Greece, with the information provided by Spratt’s map, and with the general knowledge of hydrology. Accordingly, the following scenario would be possible: The main input of water always came from the south through the Karamenderes River (Scamander). This river was channelized and diverted to exit into Beşik Bay. An artificial canal a few meters wide but as much as ten meters deep rendered high water velocity and thus ensured that most sediment would be carried out of the plain. As a result, the sediments making up the beach of Beşik Bay consist of material that was transported there by the Karamenderes River, as has been known for seventy years.

The Dümrek River (Simoeis in antiquity), coming from the east, was diverted in such a way that it circled the citadel. At the bottom of the Hisarlık hill was a small haven. A canal extended from there towards the western side of the plain, right through the city itself which was located in the floodplain. In sections, the navigable canal could have even been built over. All in all, it would have looked much like the canals in Amsterdam from an aerial view. Trojan aristocrats and their visitors were able to pass through the city by boat and would thus reach the main seaport without having to use roads.

The most impressive feature of the port facility, however, was a 30 meters deep incision into the coastal ridge, one whose remains are still visible today. Through this, ships were pulled about 500 meters over land to an inland port basin inside the floodplain that was filled with sediment-free freshwater. After unloading and loading, the skippers could wait for favorable wind conditions and then leave the port towards the Dardanelles by using the main westward current to get to the Aegean or by picking up a counter-current along the south shore of the Dardanelles that would carry them eastwards towards the Sea of Marmara. The entire system required no movable parts; levee walls of different height provided overflows when runoff was high.

With such a system, the Trojan engineers would have achieved the following goals:

Perhaps the engineers had even set up the system in such a way that the streets of the city could periodically be rinsed with water to rid them of debris and feces, as is claimed by Guido de Columnis (5.177).

Assuming Troy is identical with the Wiluša mentioned in Hittite texts, a contract between Hittite king Muwatalli II and the king of Wiluša, Alaksandu, provides an additional hint concerning the existence of hydro engineering works. The text refers to a god of Wiluša named KASKAL.KUR (KUB 21.1 iv 27–28) which may stand for natural or artificial underground waterways.

Their ships were drawn up far away from the fighting, moored in a group along the grey churning surf – first ships ashore they’d hauled up on the plain [sic!].

Everything tends to suggest that these channels must belong to a period of more remote antiquity than has generally been supposed … Such excavations are among the earliest works of mankind.

On low but steeply sloping coasts, it was almost impossible to beach ships without damaging them. Thus, installations were required which enabled the former and prevented the latter. For these purposes, channels were dug – actually being cuts into the coast – which gradually dipped towards the sea, and through which ships could easily be pulled without risk of becoming damaged.

German engineer and major Müller about the locality of the Iliad in Carl Gotthold Lenz 1798, 139

In fact, there is neither in Greece nor in Asia Minor a plain which experiences the influence of the water as much as the Plain of Troy.

Indeed, while a farmer was digging an irrigation ditch for his fields in 1989, a pithos was found next to Roman (!) concrete wall at a depth of 3.5 m (!) below the surface of the plain approx 1,8 km north of Troia in the direction of Kumkale.