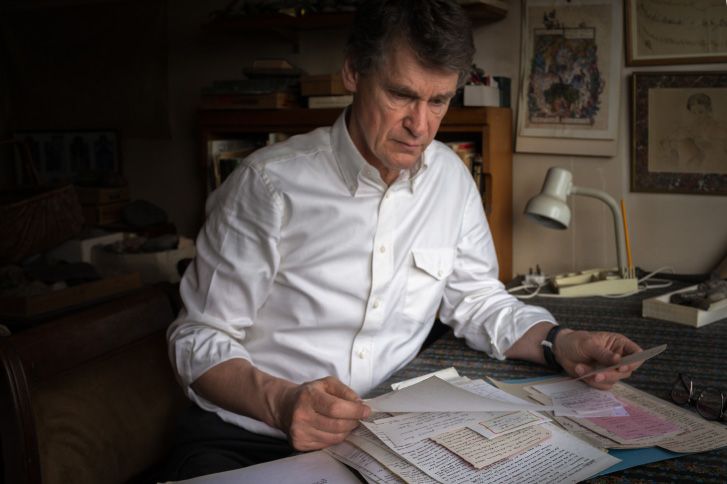 For a long time the Spiegel editorial team gave the impression of enthusiastically and unreservedly supporting your theses about Troy and the Luwians. Now Spiegel journalist Frank Thadeusz has published a scathing article about you in connection with James Mellaart’s forgeries, which you until recently considered genuine. What happened?

I think several factors came together. Firstly, journalists like to link what they write to a person. Unfortunately, when it comes to the Luwians, the obvious thing is to write something about me. The more spectacular the story, the better – whether positive or negative. Secondly, Matthias Schulz, who had engaged closely with my work for 25 years, has retired and been replaced by a young journalist who is unfamiliar with the background, and presumably has no time to familiarize himself with the topic. And finally, Frank Thadeusz wanted me to give him exclusive access to the material from James Mellaart’s study – four weeks before anyone else was informed. Of course that was not possible. For one thing, the news had already been emailed to the news agencies. Not only that, but there are so many researchers involved in this project that they couldn’t possibly have been asked to pretend nothing was wrong for four weeks.

Frank Thadeusz writes that your last book contains a chapter singing the praises of James Mellaart. Is that true?

I was as excited about James Mellaart as I was about the other pioneers of Anatolian prehistory that I portrayed in my book. I still felt that way when I arrived in London on 24 February. In the course of the research for my book I had dealt extensively with the allegations that Mellaart had invented things. However, all the official investigations – including the police commission in Izmir in the context of the Dorak affair, and the committee at the British Institute in Ankara – absolved him of guilt. The research of two investigative journalists also yielded a positive verdict. Another factor was that James Mellaart almost single-handedly discovered the Neolithic in Anatolia and excavated important sites. So I had great respect for his achievements, and as far as the allegations of forgery were concerned, I believed he had to be presumed innocent.

Now Frank Thadeusz quotes you as saying: “I’m just fed up with Mellaart.” Aren’t you making it too easy for yourself?

The sentence is of course taken completely out of context. When I talked to Frank Thadeusz, I said that the matter had fascinating aspects as well: for decades, a clever discoverer sits in his study and absorbs the latest insights from his area of expertise in order to make up stories, which he then pretends are derived from lost inscriptions. The content of the unpublished manuscripts alone is gripping, and sometimes downright clairvoyant. Of course it would be tempting to publish these texts. But this task will probably be taken on by someone else, because for the time being I’m fed up with Mellaart. This is what I said on the phone, shortly after I had returned from London, exhausted and disillusioned.

The hittitologist Annick Payne says that it is not commensurate with scientific conduct to accept the existence of the inscription of the great king Kupanta-Kurunta from a mere drawing from a man like Mellaart. How do you feel about this?

I feel the same way. But we never did that.

What about the large Luwian hieroglyphic inscription from Beyköy? Is it real or not?

We don’t know. In Mellaart’s study we found no drafts or other evidence of a falsification of this inscription. The allegation that he operated a counterfeiting workshop refers to other documents. In the publication of the Luwian hieroglyphic inscription last December, the Dutch linguist Fred Woudhuizen and I listed arguments both for and against the authenticity of this document. We came to the conclusion that the arguments for its authenticity prevailed. There are no new insights today, and Fred Woudhuizen still believes that the hieroglyphic inscription is authentic. But of course, there is more reason for skepticism now. I wouldn’t dare to come up with a judgment myself.

Max Gander considers your way of working to be “methodically questionable.” That’s a serious charge.

… which I find difficult to counter as long as he doesn’t substantiate or justify it. Is it methodologically correct to keep the drawing of this inscription hidden in drawers for thirty years? Since at least 1989, several experts have known about and possessed the transcript. When word spread that Fred Woudhuizen and I were about to publish the drawing, we were threatened with grave consequences. Are these the accepted methods in archaeology? Thanks to our publication, this document can now be scrutinized by all the experts for the first time.

Is your theory regarding the Luwians now refuted, as Frank Thadeusz writes?

Not at all. It’s not just my theory anyway: the discussion about the Luwians is now about a century old, and various textbooks have been published on the subject. It seems I’m currently seen as some sort of ambassador for the Luwians, and there will be others in the future. I received the material from Mellaart’s estate only nine months ago. If it had been real, it would have reinforced the theory about the Luwians. The fact that much of the material in Mellaart’s estate is obviously fake, however, doesn’t alter the previous research on the subject.

What is the impact of the realization that Mellaart was a forger on your Luwian Studies foundation – which is dedicated to the investigation of the 2nd millennium BC in western Asia Minor?

It would of course have been great if the cuneiform bronze tablets from Beyköy had actually existed. Without them, we still have no history of the events in Bronze Age western Asia Minor. The authenticity of the Luwian hieroglyphic inscription is, as I said, uncertain. But none of this alters the fact that a large part of the population of Anatolia spoke Luwian during the 2nd millennium BC – and that the political and economic importance of these population groups is under-investigated. My findings after 28 years of dealing with this subject remain valid. The eight articles written by Spiegel journalist Matthias Schulz are still worth reading. It would be a great pity if Frank Thadeusz were to destroy his colleague’s entire work at one stroke. Frankly, I don’t understand his motives.

Do you consider yourself a genius?

Of course not. Let’s just recap on the most important arguments I’ve put forward over the past thirty years. Firstly, I’m saying that not only the citadel knoll of Troy contains Bronze Age remains, but also the area five hundred meters west of it. Secondly, I’m saying that even if the Trojan War was invented by a poet, there needs to be an opponent equal to the Greeks on the eastern side of the Aegean. Thirdly, there are hundreds of settlements in western Asia Minor that have not yet been archaeologically explored. These arguments are actually quite banal, and not worth the excitement.

I don’t think much has changed: we can’t get anywhere without documents – real documents that you can hold in your hand. We depend on the Turkish government to allow the curators of the archaeological collections to show one or more previously unpublished documents. Once this happens, the discussion will move onto a new level.

And what will happen to the product of Mellaart’s counterfeiting workshop?

I assume that Mellaart’s manuscripts will one day appear as a book.

» An article on the same topic was published online on livescience.com.