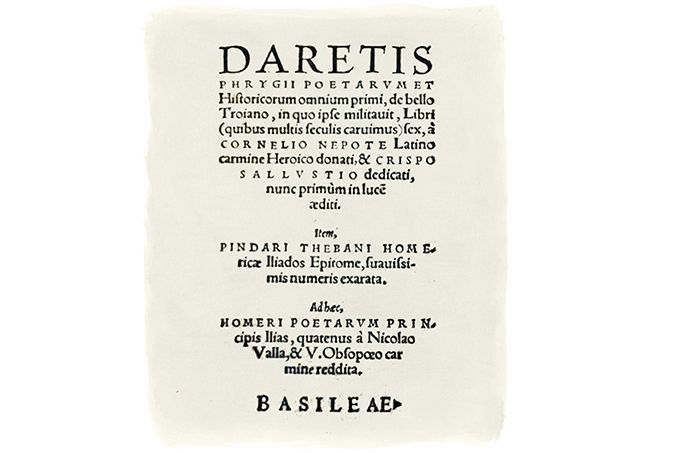 The Englishman Joseph of Exeter based his work largely on Dares of Phrygia when he wrote his poem Ylias Daretis Phrygii in the twelfth century CE. Although over two thousand years had passed since the destruction of Troy at this point, several of Joseph’s statements match the excavation findings with amazing accuracy. It is unclear how such detailed information from the time of the Trojan War could have been preserved well into the Middle Ages.

Joseph of Exeter (in Latin: Josephus Iscanus) was a cleric and writer of the 12th century who lived in Exeter and wrote poems in Latin. His best known work is a hexametric epic entitled Daretis Phrygii Ilias De bello Troiano (“The Iliad of Dares the Phrygian: On the Trojan War”) that he completed around 1190. Subsequently he took part in the Third Crusade, from which he returned unharmed in 1194.

Joseph’s epic presents the most widely-known version of the story of the Trojan War of his time, beginning with Jason and the Argonauts. In contrast to Dares, on whose account his work is based, Joseph displayed a vivid imagination and expressiveness; he embellished the historical original and added several episodes without naming his sources.

“The city twice reduced to ashes by destruction”

Certain statements in different medieval accounts of Troy correlate surprisingly well with the findings made during the excavations on Hisarlık – even though the city had been destroyed 2000 years before the medieval texts were composed. Drawing on Dares’s report, Joseph of Exeter tells how Troy was attacked twice in relatively short intervals. This is how his poem begins:

My complaint is the tears of the Trojan Women and Troy given up to its fates, the two wars of the leaders, the city twice reduced to ashes by destruction.

Archaeologists have found evidence of two violent destructions at Troy, those of Troy VIh and Troy VIIa, but some still attribute the first one to an earthquake. – Joseph also says that a certain Aeacus of Aegina had been involved in the construction of the fortress wall. Aeacus had purposely implanted a predetermined breaking point into the wall, and had told his son Telamon of Salamis about it. Telamon belonged to Heracles’s troops, who carried out the first attack on Troy:

But Telamon sneaks up stealthily and overcomes the hard resistance of the stones with his iron bar. And now, with the turned wall about to fall headlong, he steps back.

The vulnerability of the city wall of Troy in a particular place is hinted at in various ancient sources, including Homer, who says that Troy was most vulnerable “near the fig tree” (Iliad 6.431). Excavations by Wilhelm Dörpfeld indeed revealed a place where the fortification wall was less solidly built and had completely fallen over. Dörpfeld interpreted this as the result of an earthquake. The subsequent reconstruction (Troy VIIa) with narrow streets and numerous storage vessels is also mentioned in Joseph’s account.

His verses also provide a vivid description of the partly artificial course of the river Dümrek. Whether the following passage is from the original Dares version or whether it comes from another source is not clear:

The river Simois irrigates nearby countryside as it travels from another world to see Troy. By its long journey through many kingdoms and cities it would like to have earned the right to flow out into the sea finally as a Trojan River. And while it gazes in unending amazement at Troy it delays its faltering course, slows down its already sluggish flow, and causes the whole city to be encircled. The sea is angry at the delay to its waters and presses in more violently, forcing the smaller river to move away so that it can get right up to the city. You would think they were striving to see who could get closer, such was the meeting of the two currents, such the continual roaring of the mutual strife.

It looks as though some accurate information from the time of the Trojan War was preserved through written records into the Middle Ages. In any case, Homer is not the only nor even the best source of suggestions concerning the possible appearance of Late Bronze Age Troy.

He [Priam] soon reintegrates the scattered town and spreads it wide. A sounder bastion keeps at bay the Greek division. First, the wounded walls are healed and breathe beneath his hand; the ramparts are content with just six openings. … He now is glad the towers fell, for now he has a greater tool – his loss is gain.