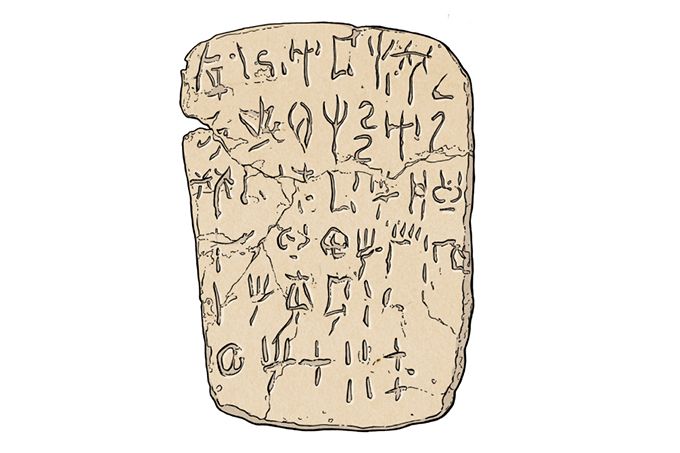 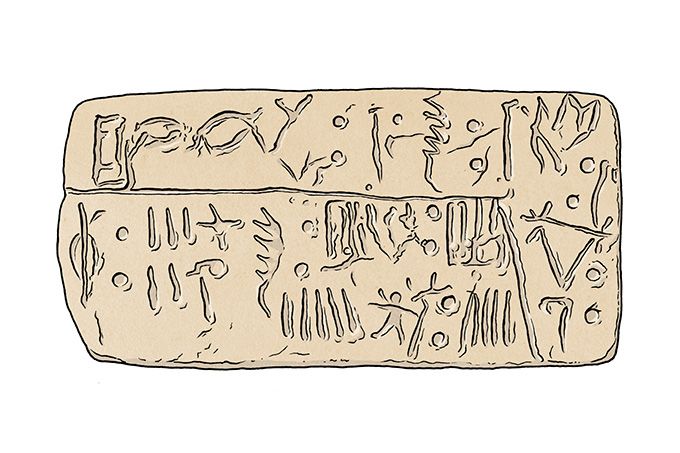 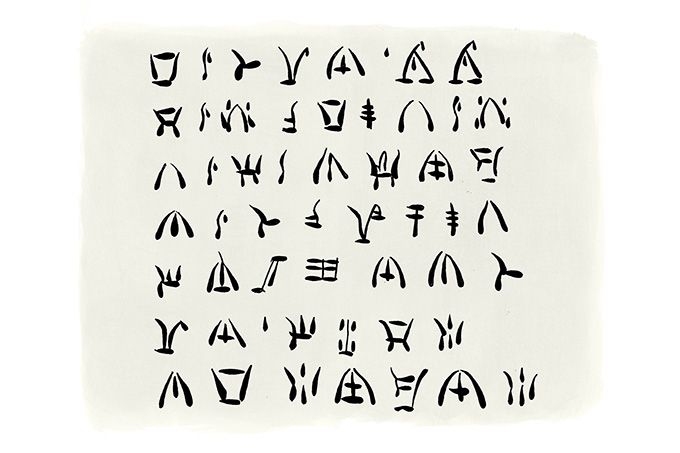 A Linear A tablet from Kato Zakros on Crete.
Clay tablet with Cretan hieroglyphic writing found at Phaestos in a Late Minoan I context.
Cypro-Minoan is an undeciphered syllabic script used on the island of Cyprus during the Late Bronze Age.

The Linear A script developed from Cretan hieroglyphic script and was common all over the Eastern Mediterranean from about 1635 to 1450 BCE. Both scripts have yet to be deciphered, and it is still unclear what language they represent. There are indications that script and language could be Luwian – but since only few finds exist, this cannot be proven.

Beginning in the 20th century BCE, a hieroglyphic script had appeared on Crete that remained in use until the 15th century BCE. Later the so-called Linear A script developed from it. Cretan hieroglyphs are known from about 150 seals and seal impressions as well as from about 120 other, especially archival, documents. These documents come from sites in Malia, Knossos and Petras. Outside of Crete, Cretan hieroglyphic writing has thus far been found only on the island of Samothrace in the northeastern Aegean Sea. The 137 characters of the Cretan hieroglyphic script are pictorial. Most certainly it is a syllabary, which has yet to be deciphered.

The Linear A script was customary and widespread in the Eastern Mediterranean from about 1635 to 1450 BCE. It consists of 70 syllable signs, various numbers and 200 signs with word meaning. The surviving documents are incisions on clay tablets which probably served administrative purposes. In addition to over 30 locations on Crete (including Knossos, Phaistos, Chania) objects with Linear A have been found on the Greek mainland (Mycenae, Tiryns), in Palestine (Lachish, Tel Haror), in Egypt (Avaris), on Kythera, the Cyclades and Samothrace, as well as in western Asia Minor (Miletus). Linear A was the precursor in the development of the Greek Linear B script and the Cypro-Minoan script. Since the latter are syllabaries, it is assumed that Linear A is also syllabary.

In 1961, British linguist Leonard Robert Palmer, a professor at Oxford University and president of the British Philological Society, published a book called Mycenaeans and Minoans, in which he used the previous decipherment of Luwian hieroglyphic to draw further conclusions about Aegean prehistory. He argued that the language record in Linear A was indeed Luwian. Another one of his key arguments was that Luwian people had advanced into Greek territory during the 3rd millennium BCE, where they also introduced their language. The German linguist Paul Kretschmer originally developed this model in his Introduction to the History of the Greek Language in 1896. Kretschmer recognized that local names ending with -nthos (such as Tirynthos) and -assos (such as Parnassos) were of pre-Greek origin. In 1928, Carl Blegen (excavator of Troy 1932–38), along with the linguist Joseph Boyd Haley, picked up on this theory in an article entitled “The Coming of the Greeks.”

Accordingly, there are a number of indications that Luwian terms have been preserved even in the Greek language – in particular in toponyms that are known to be long-lasting. In addition, there are indications that both the Cretan hieroglyphic writing and the Linear A script were connected with western Asia Minor. However, until now almost no excavations have been conducted in the relevant layers of the 16th to 13th century BCE, hence these assumptions remain hypotheses.

It is submitted that the archaeological evidence from Beycesultan combined with the above linguistic pointers lends some measure of plausibility to the working hypothesis that the language of the Linear A inscriptions is Luwian.

It would appear that Greece and Crete were twice invaded by Indo-European peoples during the second millennium B.C. First came the Luwians, causing the Middle Helladic revolution; they were followed by the Greeks, who caused the less violent archaeological break at the beginning of Late Helladic.

In 1965, Leonard Palmer [professor of Comparative Philology at the University of Oxford] advanced the hypothesis that the language of Linear A should be identified as Luwian.

It is presumed that Crete was deliberately colonized by people from southwest Anatolia. If so, the Minoan language may have developed from one of the languages of that region, perhaps Luwian.

Indeed it cannot be denied that Anatolian languages are rapidly gaining in popularity in scholarly publications dealing with Linear A.

The Cretans abandoned their hieroglyphs; they recorded their assets in the syllabic Linear A script, less handsome than the hieroglyphs, but quicker to write. It seems that the language they used in these documents was Luwian, an Indo-European language related to Hittite, which was also spoken along the west coast of Anatolia and, if an inscribed seal discovered there is any indication, in twelfth-century Troy.

From Hieroglyphic Luwian, which still overlaps with cuneiform writing in Anatolia, through Cypro-Minoan, Cypriot Syllabic and samples of other epichoric scripts in the Levant, to Cretan Hieroglyphic, the script of the Phaistos Disk and the syllabaries of the Aegean, we have a continuum of non-cuneiform scripts the limits of whose dispersal roughly coincide with those of the dispersal of the [Luwian] suffixes -nth- and -ss-.