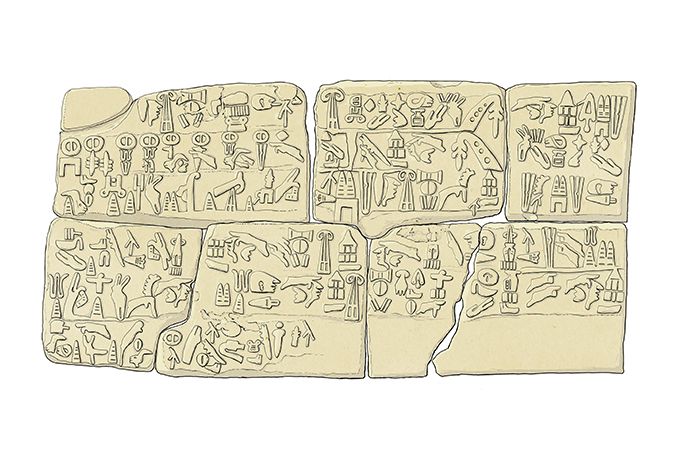 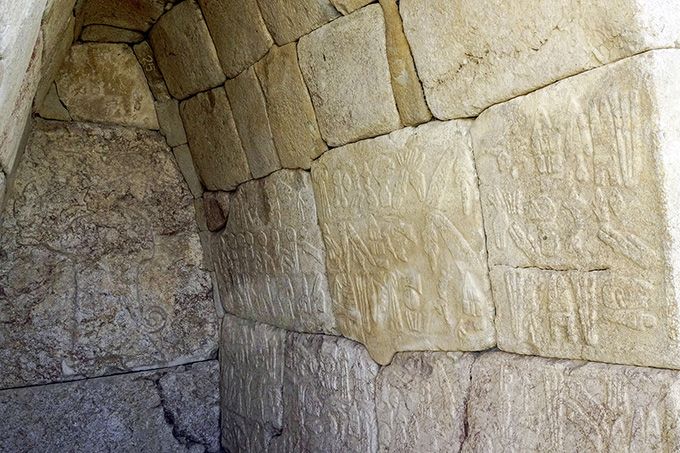 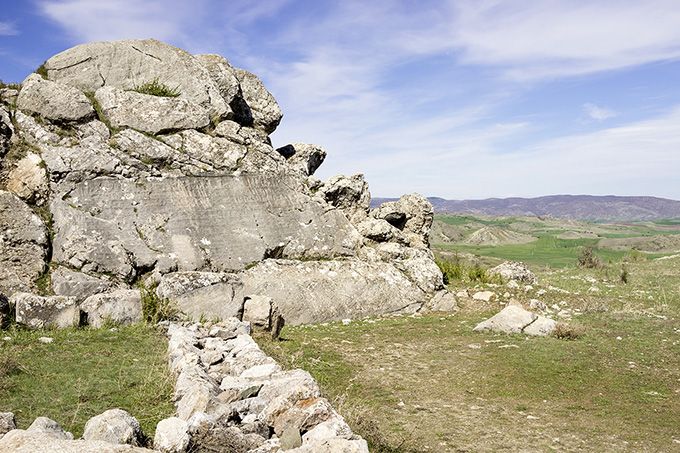 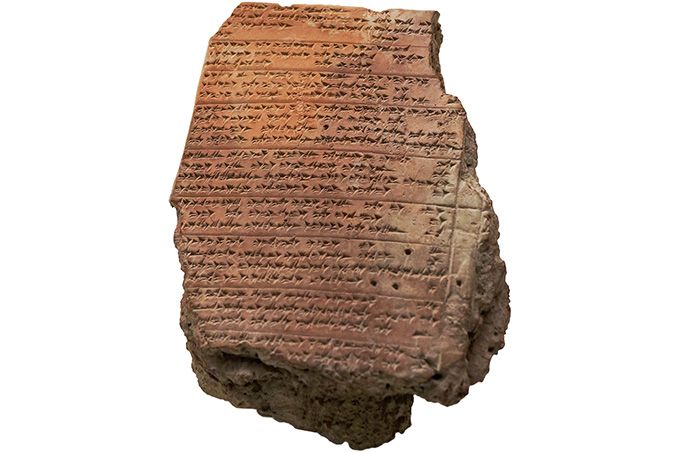 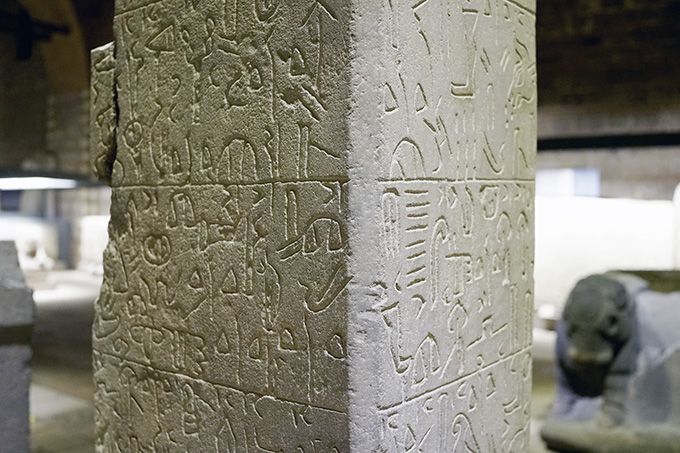 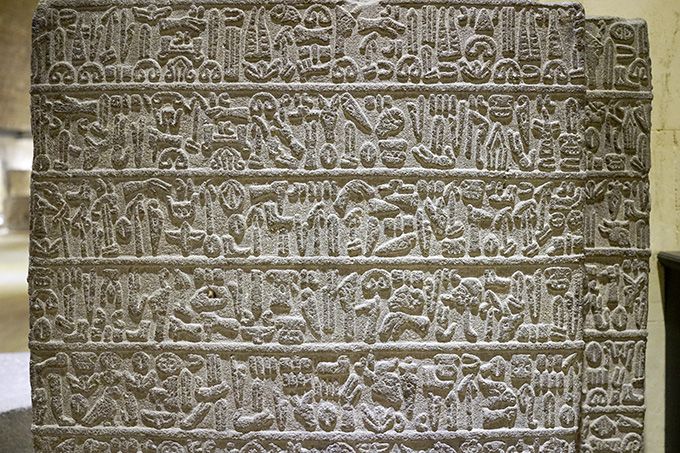 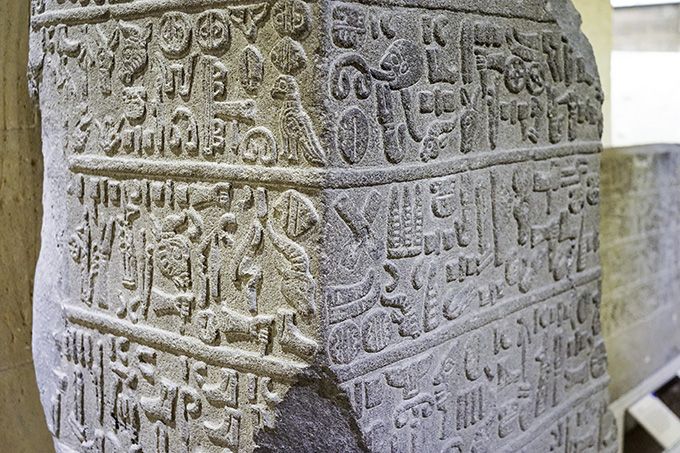 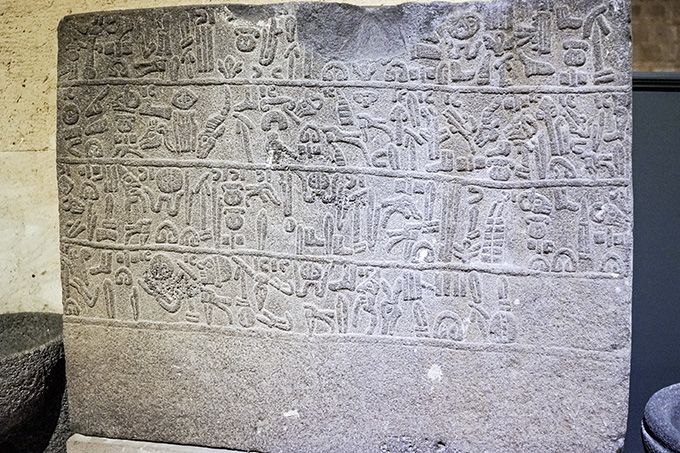 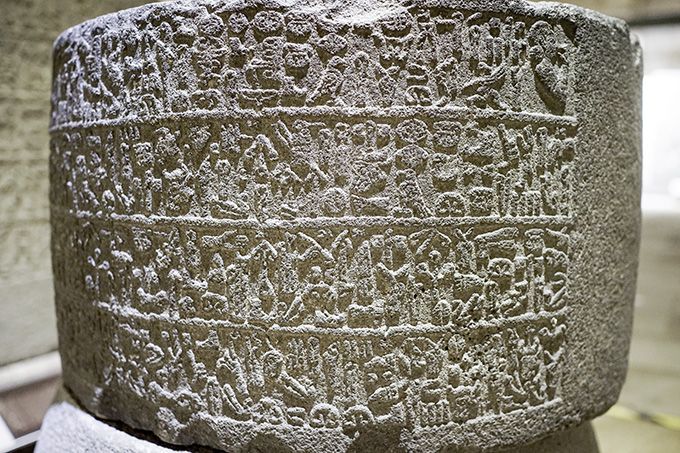 The Luwian hieroglyphic symbols can be traced back to 2000 BCE, and for a long time had coexisted with Luwian texts written in cuneiform. Because both scripts were found in Hattuša, until a few years ago scientists called the Luwian hieroglyphic script “Hittite hieroglyphs.” This meant that almost every archaeological site on which Luwian hieroglyphs had been found was automatically – and incorrectly – assumed to have been part of the Hittite empire.

In addition to Luwian texts written in cuneiform, an independent Luwian hieroglyphic writing existed. Already in 1812, the Swiss traveler Jean Louis Burckhardt, who was the first European to visit Petra and Mecca, noticed in the Syrian city of Hama blocks of stone marked with unknown hieroglyphics. The English philologist Archibald Henry Sayce suggested in 1876 that these inscriptions should be regarded as Hittite. In the first half of the 20th century, many more such inscriptions were discovered, mainly in Karkemish and Hattuša. In 1917, the Austrian-Czech linguist and orientalist Bedřich Hrozný succeeded in deciphering the cuneiform tablets of the Hittites. Thereafter, in 1919, the Swiss Assyriologist and Hittitologist Emil Forrer was able to read documents from the archives in the cuneiform Luwian language for the first time. But only after 1953, when the Luwian cuneiform texts from Hattuša were published, could documents in cuneiform and in hieroglyphic script of Luwian origin be brought into relation to one another. Consequently, the Luwian hieroglyphic script, with its 520 symbols, could be largely deciphered and understood.

The hieroglyphic script can be tracked back to at least 2000 BCE when its symbols appeared on a seal found at the archaeological site of Beycesultan. Early evidence of hieroglyphic writing is recorded particularly in official seals, in which the name and title in the center were written in hieroglyphics but surrounded by cuneiform texts. More lengthy hieroglyphic inscriptions became common during the last century of the Hittite Empire. These include the 8.5-meter wide Nişantaş inscription in Hattuša, in which the last Great King Suppiluliuma II reported his conquest of Cyprus. After the cuneiform script had disappeared in Asia Minor with the collapse of Hittite Empire around 1190 BCE, Luwian hieroglyphic writing started to spread. In southeast Asia Minor and Syria up to 600 BCE, substantial evidence of Luwian hieroglyphic writing can be found, especially in monumental royal inscriptions, but also in the form of correspondence written on strips of lead.

Preserving the knowledge of writing for 1400 years

The origins of Luwian hieroglyphic writing are still obscure. The Dutch linguist Fred Woudhuizen has argued for quite some time that the Luwian hieroglyphic script was already common during the Middle Bronze Age (2000–1700 BCE). The knowledge of writing has long been regarded to have developed out of economic need. Western Asia Minor possessed abundant natural resources – and therefore may have required a script early on. On the other hand, ancient orientalists now see a connection between religious-cultic practices and the earlierst forms of writing, and this may indeed apply to the first Luwian inscriptions too. In any case, evidence for hieroglyphic writing in western Asia Minor has often been considered proof of the presence of Hittites, because the Luwian hieroglyphic script was initially called “Hittite hieroglyphs.” This terminological confusion may have contributed to the fact that, on maps, the Hittite Empire is shown to have grown westward until it even had a common border with Mycenaean territory. Linking the finds of Luwian hieroglyphs to Hittite domination, however, is neither plausible nor justified.

After the fall of the Hittites and the apparently gradual disappearance of the cuneiform script, only the hieroglyphic form of writing was maintained. It has been preserved primarily in the form of monumental rock inscriptions in public, often executed on orthostats or stelae. However, inscriptions on lead indicate that the script was also used on perishable and reusable material. The stone inscriptions usually describe the founding of a city and the achievements and honors of rulers, even their servants are included. The German classicist Hubert Cancik (2002, 79) says the following about the scribes:

Some of these so-called writers were personalities of high rank who knew diplomatic practices, many languages and multiple scripts in different media (stone, clay, lead, wood). They mastered the forms, topics from building reports to accounts of glorious victories, and were able to create archaistic texts by reusing archaic templates found in their libraries.

From about the beginning of the 1880ies an awareness arose that next to or rather between the two great cultures of the Euphrates-Tigris countries and the Nile valley a third one situated in Asia Minor and Syria had to be distinguished. Albeit not being of equal rank of importance with the two others, the development of its own writing system [Luwian hieroglyphs] warranted a certain independence. It also forced us to look at the peoples who bore this culture with somewhat different eyes, compared to most others that we know from cuneiform or Egyptian reports.

By whom and for what language was the hieroglyphic writing developed? By Luwians, for Luwian, in Luwian lands.

The speakers of Luwian inhabited a vast area stretching from the eastern shore of the Aegean Sea to the Euphrates valley.

Although the Luwians played at least as important a role as the Hittites in the history of ancient Anatolia, Luwian studies have traditionally been considered a relatively insignificant appendix to Hittitology. … The situation begins to change with the growing realization among Hittitologists that most of the groups called Hittites by themselves or in foreign traditions were either Luwian speakers or included Luwian language communities.

There is actually no reason to claim a connection of the hieroglyphic inscriptions of western Anatolia with the Hittite presence in the region and regard them as a “grip of the Empire.” On the contrary, the extant material, however scanty it is, strongly speaks for the view that they are products of the independent vernacular scribal tradition or, rather, traditions.