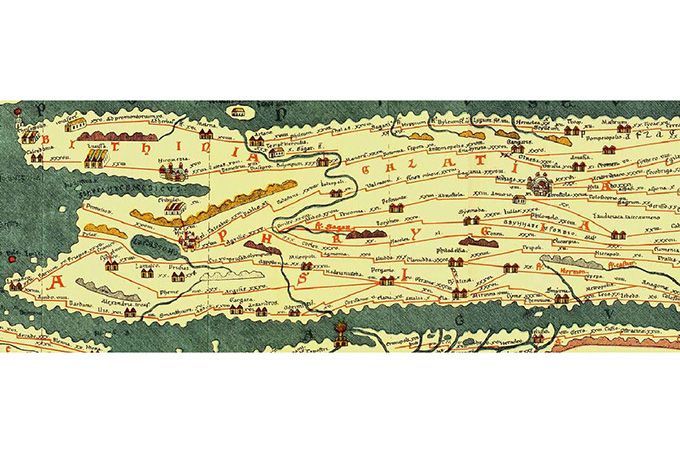 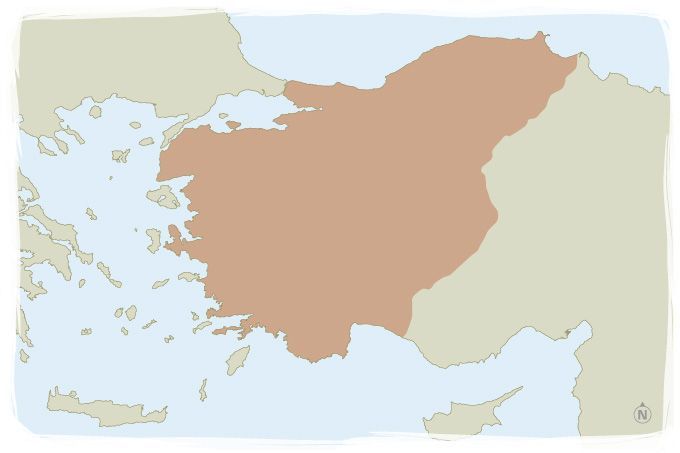 Roman travel routes through western Asia Minor according to the Peutinger map, resting on a Roman original from about 375 AD.
The Lydian kingdom at its maximum extent.

In Lydia, in the region of the Luwian Šeha River Land, survey archaeologists investigated Kaymakçı, a citadel almost five times the size of Troy VI. Nevertheless, the site differs so distinctly from other Luwian settlements that, in all likelihood, it had not been the foremost center of this prosperous region for a long period of time.

It is certain that Sardis, in the valley of the Gediz (the Hermus River in antiquity), was a place of central importance to western Asia Minor. Sardis was situated on a major east-west route, more specifically, the one that stretched from Ephesus on the Aegean coast to Susa at the Persian Gulf 2500 kilometers away. Goods, and with them most likely a great deal of knowledge, traveled along this road from Babylonia to western Asia Minor and further onward from there, to the coastal cities of the Aegean. Consequently, architectural monuments and rock facades in Lydia that have survived display an idiosyncratic blend of oriental and Aegean traditions.

Excavations by American archaeologists at Sardis prove that a settlement in this location has existed since at least the 3rd millennium BCE and that Late Bronze Age traditions continued during the so-called dark centuries of the Early Iron Age. In addition to the thriving east-west trade, Lydia’s unbelievable wealth was based primarily on rich mineral resources, but also on their high-quality artisan crafts, the production of fine fabrics and on the possession of abundant livestock.

Since 2005, the area around Lake Gyges (today Lake Marmara) about 10 kilometers north of Sardis has been systematically explored by archaeologists. As part of a survey conducted by Christopher H. Roosevelt and Christina Luke from Boston University, archaeologists discovered four (two large and two smaller) citadels, which probably had been built around 1700 BCE and were inhabited until 1200 BCE. The two smaller citadels (Kızbazı Tepesi and Gedevre Tepesi) were each 1 hectare in size. The second largest citadel (Asartepe) extends over 3.8 hectares. In Kaymakçı, the largest and most complex of the four citadels, the fortress walls enclose an area of 8.6 hectares. This is almost five times the size of the citadel of Troy VI. Kaymakçı covers the entire lower peak of the Gül-Dağ mountain ridge on the western shore of Lake Gyges. The citadel consists of terraced, eccentric rings around an almond-shaped central platform of 35 by 60 meters, which lies in the most elevated and best-protected area. Within the fort, numerous remains of walls have been preserved, including a megaron-like building that covers an area of 14 by 18 meters. A far-reaching scatter of pottery outside the citadel is interpreted as evidence for a sprawling lower city. Because of its size and level of complexity, Kaymakçı is considered a central location as well as a center of power for the local settlement network and the whole region; thus, according to the investigating archaeologists, it would likely be the center of Šeha River Land.

Despite all the excitement about the discovery of Kaymakçı, one should not forget that the castle and its neighbors, in terms of their location, have little in common with other Luwian settlements. Nowadays it is even possible to prove with statistical methods that Luwians had almost exclusively settled in fertile flood plains and in the immediate vicinity of running waters – and often inhabited these sites continuously for more than a millennium. Kaymakçı, however, did not evolve gradually, but appears to have been a soberly planned building complex, on a mountain top to boot, nowhere near a source of running water. Its construction is evidence of central planning (knowledge), the potential to implement this plan (power) and a need for protection (i. e. the existence of a threat). It is not a tell site, in which numerous settlement layers have been piled on top of one another. On the contrary, in many areas the bare rock is covered by only a few centimeters of dust. Thus, Kaymakçı could hardly have been the only center of the region over a long period of time. It is quite conceivable that even greater discoveries could be made in this geographical area, perhaps even discoveries including the actual royal residence.

In some statements of questionable reliability, Herodotus claimed that Lydian dynasties were first established at the time when Agamemnon at Mycenae became king (around 1216 BCE) and had ruled for twenty-two generations, until their last ruler – the unfortunate Croesus – ascended to the throne. Croesus reigned from about 555 to 541 BCE. According to Herodotus (1.3), Lydian dynasties lasted for 505 years. One of the most famous ancestors was Gyges, a king who usurped the throne most likely in 680 BCE. The sum of years from Gyges’s first year of government plus the number of years mentioned by Herodotus brings us to 1185 BCE. From this follows that, at the time of Herodotus, memories were apparently still in existence that reached all the way back to the beginning of the Dark Ages.

Linguistically speaking, the names of Lydian kings (i. e. Sadyattes, Alyattes) belong to the same type as the names of Luwian dynasties (Maduwatta) from the time of the last Hittite king. This means that Early Iron Age societies in western Asia Minor took up traditions from the Bronze Age.

Of course we must not say, on the basis of what we proposed, that ‘the Lydians were Luwians’ … The name Luwian was only maintained as a designation of the Lydians, who proved to be the stronger ones. The new interpretation provides a welcome confirmation of the former existence of the name Luwians in the West.