Migrations at the Beginning of the Iron Age 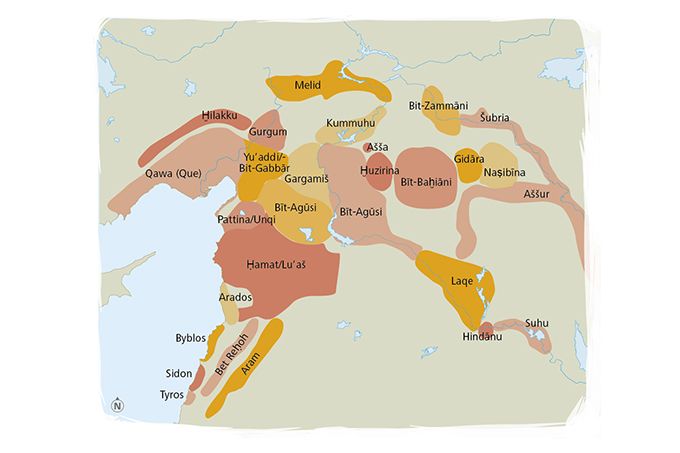 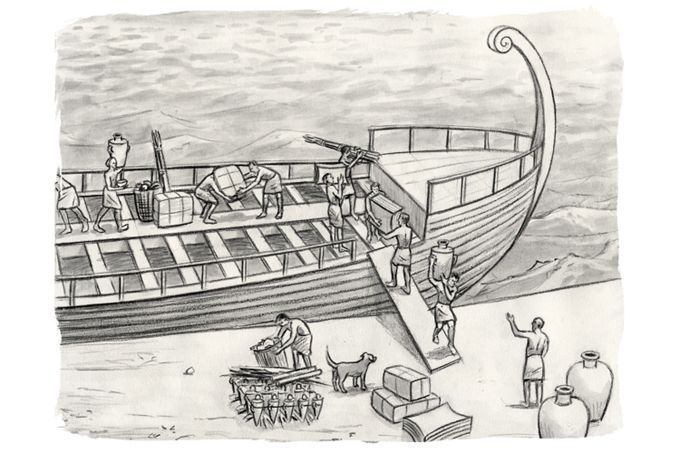 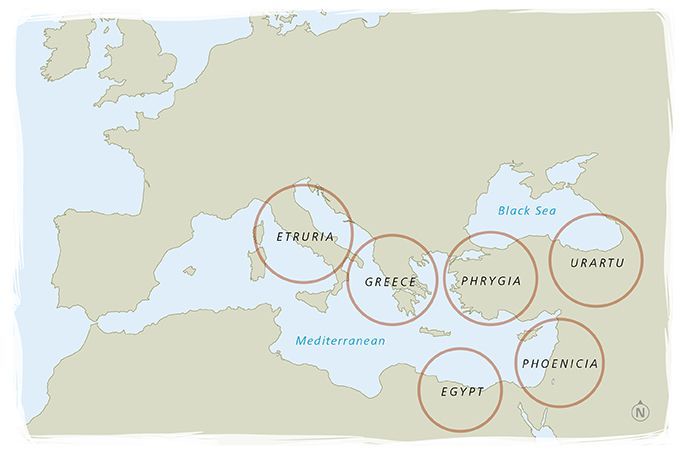 After the Sea Peoples’ raids, around 900 BCE, the Fertile Crescent consisted largely of Luwian-Aramaic principalities.
After years of destruction shortly after 1200 BCE, many residents moved away from the Aegean to regions they knew because of the long-distance trade.
At the beginning of the Early Iron Age 90 percent of the settlements in mainland Greece and many in western Asia Minor were abandoned. Other regions benefited from immigration.

The transition from the Late Bronze Age to Early Iron Age was accompanied by extensive migrations. Many people left the scenes of war and moved to different regions that they probably knew through prior trade relations. They mixed with the local population, and in this way new centers and cultures emerged. Therefore, the end of the Bronze Age may not only be seen as a time of cultural decline, but also as a new beginning.

During and after the attacks of the Sea Peoples, extended migrations took place. The relief at the mortuary temple of Ramesses III in Medinet Habu shows migrating families carrying their belongings on oxcarts. Many scholars presume that these wandering groups formed coalitions with the Sea Peoples. The explanation of the cause of migration usually depends on the motives assumed for the Sea Peoples’ invasions.

On the Greek mainland, 80 percent of all settlements were completely abandoned. While some palaces show traces of violent destruction, others seemed to have remained unthreatened but were emptied nevertheless. The Mycenaean culture continued to exist on a significantly reduced level for another 150 years or so until it vanished completely.

While the former centers of power in Greece were largely depopulated, the population density grew elsewhere, in particular at the periphery and in regions to which long-distance trade relations had previously been maintained. Such regions included, among others, Euboea, Rhodes, Cyprus as well as the Levant coast from Syria to Canaan. Even Sicily, Sardinia and large parts of Italy soon profited from the collapse of the Bronze Age kingdoms.

A new beginning in distant lands

The invasions of the Sea Peoples resulted in an unparalleled fall from the peak of wealth of aristocratic leaders in the heroic age to a simple agricultural society. The people returned to their indigenous, independent and decentralized way of life. Many left their ancestral homes and settled in distant lands. After such a complete collapse of a political system, the survivors often have little more than their lives and skills to take with them, so it made sense to make a fresh start in distant lands that were known from the maritime trade.

Migrations led to a profound mixing and cross-fertilization of different ethnic groups and eventually to the formation of completely new centers and cultures. As a consequence, the transition from the Bronze Age to the Iron Age can be seen as something other than just a cultural setback. The political systems of the Late Bronze Age had been extremely simple. Rival city states and petty kingdoms that had controlled and fought each other defined the political landscape. Agriculture had always been the main pillar of the economy, while international trade was virtually limited to metals and luxury goods. Only the rulers, who ultimately profited from tributes paid by the rural population, became wealthy. Thus only the highest echelons of the strictly hierarchical society benefited from cultural progress. The writing system, especially that common in Greek palaces, was highly complicated and downright incomprehensible to the uninitiated. The development of general education or the emergence of a literary tradition would hardly have been possible within these structures of the Bronze Age society.

Given these circumstances, Mediterranean cultures had probably reached the zenith of their cultural development in the 13th century BCE. Any further progress would have required a destruction of existing structures and a completely new beginning. Therefore the crisis years during the 12th century BCE – as brutal as they were – could be seen as a cleansing thunderstorm that prepared the ground for a comprehensive political and economic restart. Many cultural developments of fundamental importance that are relevant to our society today sprang up soon after this cultural incision. Among them are the alphabetic writing systems, the oldest texts of western culture (including the Old Testament and the Homeric epics), monotheism and the minting of coins.

There is a lot of evidence, both archaeological and linguistic, for a southward shift of Anatolian people from the plateau to northern Syria, with groups from Caria, Lycia and perhaps Arzawa carving out new small states on the fringes of the old Hittite Empire.

In any case, Luwian elements amongst the Late Bronze Age peoples of Anatolia continued with some vigor beyond the end of the Bronze Age through the succeeding “Dark Age”, and figured prominently in the Iron Age civilizations of the first millennium.

After the taking of Illium, certain Trojans, escaping the hands of the Grecians, landed with small boats in Sicily; and having planted themselves on the borders of the Sicanians, both the nations in one were called Elymi.

Because iron, copper and mineral workings in general had been overlaid with sludge and had been lost to sight, so that it was virtually impossible to refine fresh supplies of metal. Even if there was the odd tool left somewhere on the mountains, it was quickly worn down to nothing by use. Replacement could not be made until the technique of mining sprang up again among men.