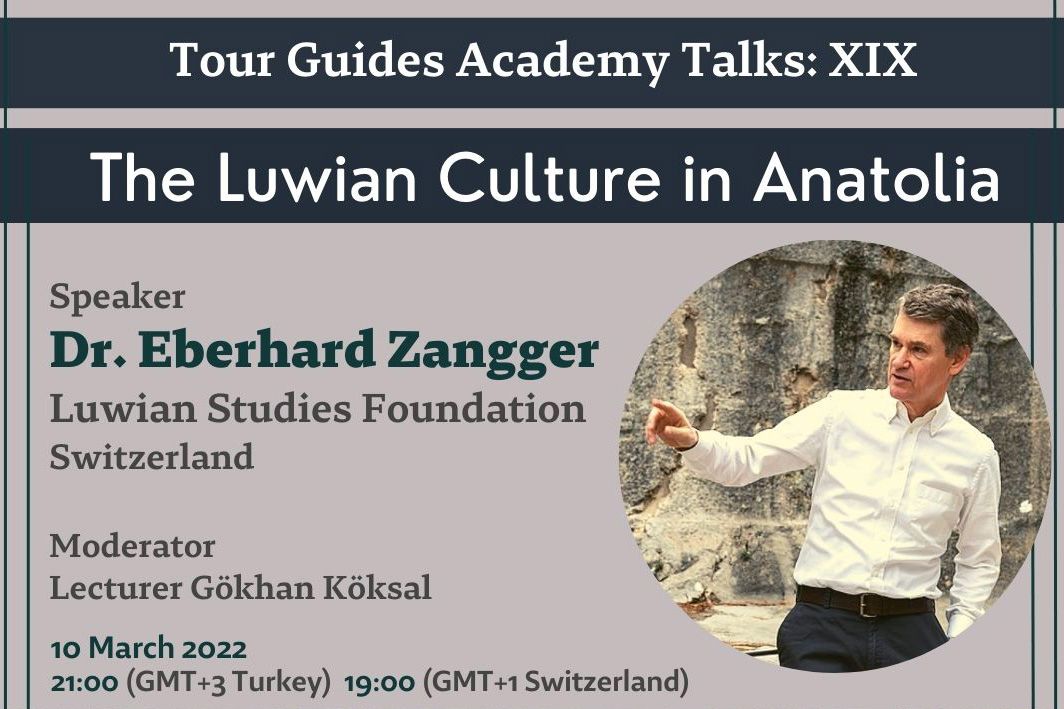 The Luwians were the focus of a 75-minute online lecture given by Luwian Studies’ President Dr. Eberhard Zangger on March 10, 2022, in the framework of the YouTube channel for the Tour Guides Academy. Professor Uğur Akdu from the Tourism Faculty of Gumushane University had invited Eberhard Zangger to speak about the current state of knowledge of Middle and Late Bronze Age cultures in western Turkey. The tour guide channel lecture series consists of live presentations followed by questions and answers in which specialists talk in detail about archaeology, culture, art and history. The lecture was moderated by Gökhan Köksal from Sıtkı Koçman University in Muğla. Due to the pandemic-related restrictions on teaching in the past two years, it had not been possible to give lectures at universities in Turkey. The Tourism Academy’s online platform therefore provides an excellent opportunity to fill the gap and report on the latest research findings. The Tour Guides Academy has chosen live broadcasts as its format to enable dynamic interaction with the audience. The recorded lectures, including the Q&A session, are available on YouTube at any time thereafter.

The lecture deals with the general conditions in the Eastern Mediterranean at the end of the Late Bronze Age as well as the cultural collapse in this region after 1200 BCE. Other topics include the origin and role of the Sea Peoples, the definition of the term “Luwian”, the identity of the Luwians, the most important features of their culture as well as the relations with their neighbors. Documents in Cypro-Minoan script from Enkomi show how trade in fabrics took place during the peaceful period around 1200 BCE on the sea route between Troy, Cyprus and Ugarit. However, one very special document has also been preserved and found during excavations in Enkomi. It is the letter of a Cypriot admiral who was on a reconnaissance mission to the Aegean Sea and who there, completely unexpectedly, encountered the fleet of the united Sea Peoples. The lecture concluded with an excursion into epistemology to explain how it is possible that we know so little about the Luwians to this day.