Non-Homeric Accounts of the Trojan War 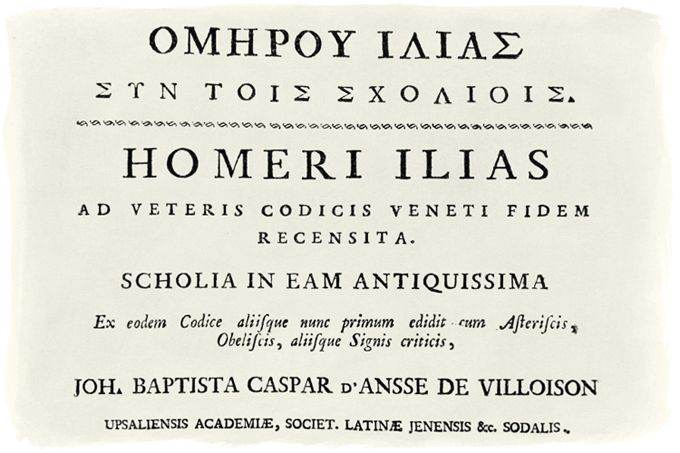 In 1788, Jean-Baptiste Gaspard d'Ansse de Villoison published the first edition of the Iliad Codex Venetus A, including its scholia.

Troy today is inextricably linked to Homer. This perspective, however, is relatively new: In the Middle Ages Homer’s works were unknown, while other reports about the rise and fall of Troy were very popular. Many of those non-Homeric Troy reports, as we call them today, relayed a Troy-friendly version of events while aiming to pass down historical facts. They had a lasting impact on European thinking. At the end of the 18th century, however, they were superseded by a renewed interest in Homer. To this day, no one has devoted time to comparing the details provided by non-Homeric Troy reports with the archaeological finds made over the past century.

T
oday, most people think that the stories surrounding the Trojan War were transmitted in only one epic: Homer’s Iliad. But this view is less than 200 years old. A number of comprehensive reports of the Trojan War still exist today, the so-called non-Homeric accounts on Troy. As it turns out, Homer had used only small parts of the Epic Cycle for his poetry. The plot of the entire Iliad only treats, in detail, events over the course of fifteen days and five nights. In order to appreciate Homer’s episodes, the audience had to know the whole framework of legends. These had to be transmitted in one way or another. This and the fact that a number of people were concerned that the quality and popularity of Homer’s work could distract from what really happened spurred other authors to produce comprehensive accounts of the Trojan War. However, when it comes to examining ancient texts, there seems to be an imbalance between the attention that Homer’s work received on the one hand and the little interest in the non-Homeric accounts of Troy on the other.

Homer is generally considered to have offered the Greek perspective of the conflict, while many of those non-Homeric Troy reports relayed a rather Troy-friendly version of events. During the Middle Ages, it was those stories that became popular and common knowledge, not the Homeric epics. They had a lasting impact on European thinking. For over a thousand years, aristocratic families, royal dynasties and entire nations traced their family lines back to Troy. Some historians have considered Troy “the common heritage of Europe” and “the idea of a genealogical relationship within Europe,” but these notions are not related to Homer, because during the peak of the European enthusiasm for Troy, Homer’s work had been neglected and was only known from hearsay.

Apparently, not a single attempt has been made so far to compare the content of non-Homeric reports on Troy with the findings made during 140 years of excavations. At the same time, numerous studies link Homer’s work to the archaeological findings at Troy. On the 462 pages of his textbook entitled Troy and Homer the retired Hellenist Joachim Latacz mentions the existence of non-Homeric sources on Troy only once and with only one word: he calls them mythographs. The term suggests that those stories involve divine forces. But the opposite is true: the non-Homeric sources contain virtually no mythology. It is Homer’s account in which the gods determine the course of history. The poet even claimed to know what gods talked about in conversations. How did he find out? Precisely for these reasons, Homer was considered non-authentic, at least until the Enlightenment. Homer had not been around at the time of the Trojan War, and he claimed that gods intervened in human affairs. Both these considerations made his work seem unreliable.

To date, much inspiration in Aegean prehistory has its source in Homer’s poetry. Charles Maclaren was able to locate Ilion based on the information provided by Homer. And when, during the excavations, geophysicists unexpectedly discovered trenches in the bedrock, Manfred Korfmann and his head philologist, Joachim Latacz, interpreted these as “obstacles against approaching chariots,” because the digging of a trench is indeed mentioned in the Iliad (although on the Greek side).

The interest in Homer was only revived at the end of the 18th century and soon turned into an obsession because the works of Homer supported the thinking of the new humanism in the 18th and 19th century. In this respect, it was helpful that in 1788 a manuscript of the Iliad from the 10th century was published; the Codex Venetus A with numerous scholia and marginalia. Since then, for about seven generations, Homer’s work has received major attention in the curricula of Western schools, possibly causing today’s scholarship to lose the necessary distance. The identification of Luwians and their role in the Sea Peoples’ movements and in the Trojan War now provides a welcome opportunity to look at some neglected ancient texts from a new perspective.

Up until the 16th century the Trojan War is seen as a real event of world-historical importance.

The first German philhellenes borrowed their ideals – self-cultivation, disinterested contemplation of the beautiful, good, and true, admiration of the ancients – from aristocratic models; but the incorporation of nineteenth-century philhellenism into the founding ideals of Prussia’s new research universities, secondary schools, museums, and art academies after 1810 universalized these values and in effect imposed them on generations of middle-class Germans.