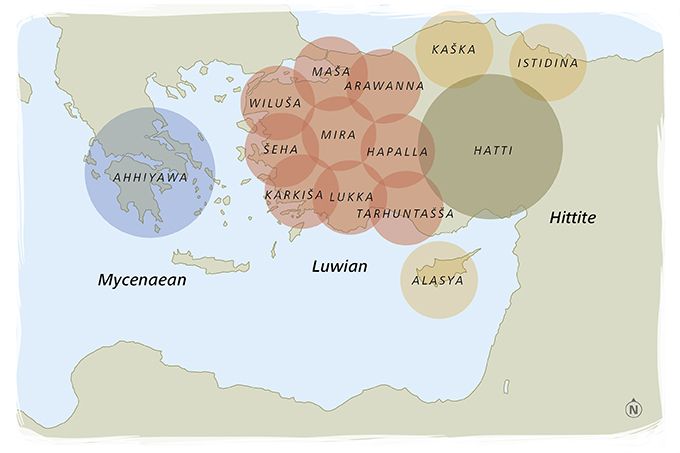 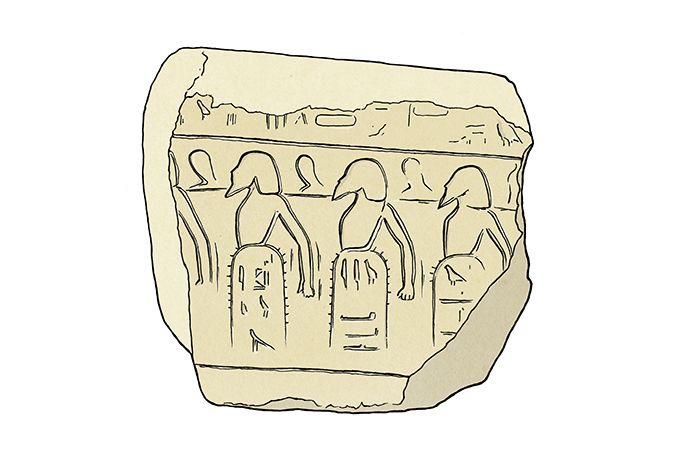 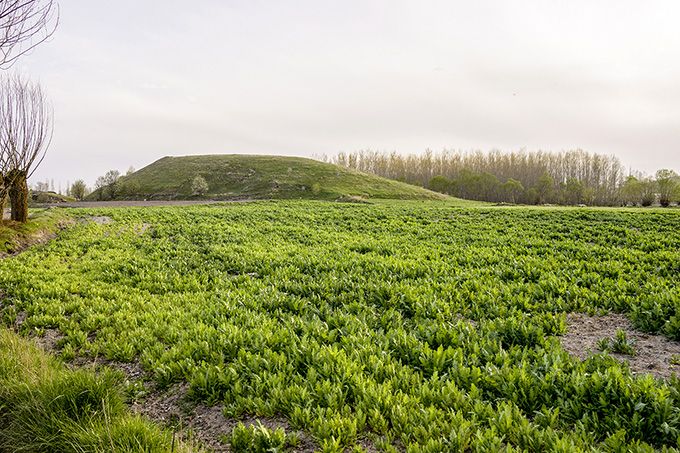 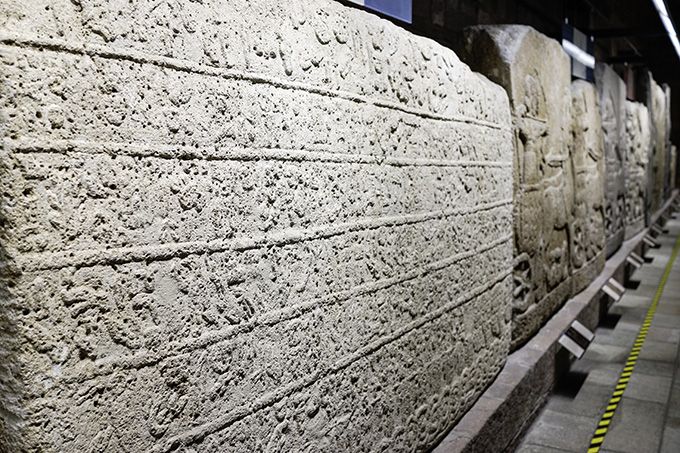 The Luwian petty states (red) between Mycenaean Greece and Hittite central Asia Minor are well known from the documents found in Hattuša.
This block of a quartzite base from the mortuary temple of Amenhotep III may depict a Luwian on the left.
Beyköy, a particularly promising tell site north of Afyonkarahisar.
Limestone orthostat from Karkamiş (900–700 BCE) in which the king lists the cities he conquered.

From written documents we know today that during the Late Bronze Age about two dozen major and minor kingdoms existed in western Asia Minor. Some of them had been, at least temporarily, vassal states of the Hittite kingdom. However, the maximum extent of the Hittite empire (including all vassals) that is shown on most political maps of the Late Bronze Age in Asia Minor existed only for a short time and was not stable. The currently common representation of a Hittite empire that extended over almost all of Asia Minor is therefore misleading.

The western neighbors of the Hittites are fairly well-known by name. The term Luwiya in Hittite documents soon disappears and is seemingly replaced by the largely synonymous use of the name of the most influential Luwian kingdom: Arzawa. The latter can be broken down into its main constituents, the petty kingdoms of Wiluša, Šeha, Mira, Hapalla and Arzawa in the narrower sense. The mainland of Arzawa lay in the valley of the Büyük Menderes River (Maeander in antiquity). Most researchers assume that its capital, Apaša, was the predecessor of ancient Ephesus and as such was located near the modern town of Selçuk. It is evident from the personal names used at the time that Luwian was spoken in Arzawa. Arzawa reached the peak of its political power during the 15th and early 14th century BCE, at a time when the Hittite Empire was insignificant. Letters in the Amarna archives reveal that Arzawa then ranked as the leading power in Asia Minor; its kings even cultivated contacts with Egypt.

The Hittite documents mention another dozen Luwian kingdoms in west and south Asia Minor, which sometimes were vassals of the Great Kings of Hatti and sometimes enemies. These include, in addition to those already mentioned, Lukka, Karkiša, Pedasa, Tarhuntašša, Kizzuwatna, Walma and Maša. For the past fifty years or so there has been a dispute amongst scholars about the relative positions of these petty kingdoms. In particular, the identity of the western Asia Minor state of Wiluša remains unclear. According to Hittite sources it was a vassal of Hatti during a short period (1290–1272 BCE). A number of researchers today would equate Wiluša with Troy, while others argue that Wiluša must have been located in southwestern Anatolia.

Although the Late Bronze Age kingdoms in western Asia Minor have been known for over a century thanks to the Hittite cuneiform texts, thus far this knowledge seems to have had almost no significance for a reconstruction of the political situation and the trade relations during the Aegean Bronze Age. The two dozen Luwian kingdoms, large and small, hardly appear on any historical maps dealing with Late Bronze Age Aegean civilizations. On the contrary, most maps currently show a vast Hittite Empire covering almost all of Asia Minor. This situation refers to the time after 1300 BCE, when it was valid for a relatively short period. The Bronze Age, however, lasted for 2000 years, while the Hittite Empire existed for only about 400 years – and even then it was essentially limited to central Asia Minor. In addition, from about 1450 to 1380 BCE, the Hittites were powerless.

The maps showing the huge expansion of the Hittite Empire give the impression that the Hittite kings were overpowering – and disguise our lack of knowledge. In reality, the neighboring states in the west caused a lot of trouble for the great Hittite kings. Not once, but twice, they even contributed to the downfall of the Hittite Empire. In any case, regional expansion of a realm does not always correlate to strength. For example, a map showing the extent of the German Empire in 1918 would not necessarily indicate that this nation had just lost a world war.

Some of today’s open questions are: Who lived in Asia Minor during the 1600 years of the Bronze Age prior to the formation of the Hittite Empire? Who brought about the decline of the Hittite Old Kingdom around 1450 BCE? And who called the shots in Anatolia afterwards? It is known that the Old Hittite Empire lost importance at approximately the same time as the Minoan civilization. Small kingdoms of Mycenaean origin benefited from the loss of power of Crete, and petty states in western Anatolia most likely took advantage of the temporary decline of Hatti. Although these changes in power occurred almost at the same time, this does not necessarily mean that they were causally connected – but then again, has the question been posed that they might have been?

Little remains of the mortuary temple of Amenhotep III, known in modern times as Kom el-Hettan on the west bank of the Nile, apart from the Colossi of Memnon – two massive 18-meter stone statues of Amenhotep that stood at the gateway. The temple was used as a quarry already during the reign of Merneptah (1213–1203 BCE).

During the excavation campaign 2004/05, engineers and workers under the direction of the archaeologists Hourig Sourouzian and Rainer Stadelmann retrieved a block weighing almost 20 tons from the swamp deposits. It contains representations of captured men, with their heads surmounting oval name rings representing foreign countries and fortified towns allegedly subdued. Depicted are a Syrian, a Mesopotamian, a Hittite and two other folks of more likely “Asiatic” type, as the excavators state. All are bound together with a papyrus tied around their neck. The beardless Hittite is followed by a longhaired person representing Isywa and a bald headed one from Arzawa. The excavators argued that Isywa might be an early form of Asia, at the time a coastal region in western Asia Minor.

A real sensation was the discovery of new blocks of quartzite bases from the northern Portico of the Peristyle Court. On these blocks, representations of foreign folks are depicted, which resemble the Aegean people found in the last century. The figure, head, body and the name are exactly carved, but not modeled in detail. The excavators interpreted the names as Luwian, Great Ionia, and Mitanni. Other researchers have suggested Arawana, Maša, Maeonia for these terms. In any case, all proposed readings reflect regions in Asia Minor and thus show that the Egyptian people of the 14th century BCE had a good understanding of the political geography of western Asia Minor.

The Luwian area, however, comprises the Arzawa countries which all scholars, regardless of differences in detail, locate on the Mediterranean coast of Asia Minor; on the basis of proper names preserved in the Greek and Roman inscriptions it can be assumed to have extended from Lydia in the west to the confines of Syria in the east.

Prominent among the western Anatolian territories was a land called Arzawa. This land appears a number of times in Hattuša texts, often in conflict with the kingdom of Hatti.

And if you hear in advance about some evil plan to revolt, and either a man of the Seha River Land or a man of Arzawa carries out the revolt … but you do not write about it to My Sun [me], … you will violate the oath.

In Greek historical times the name ‘Asia’ was initially tied to Lydia, but the expansion of the term Asia by the Ionian geographers to describe a continent was only possible because in the memory of the inhabitants of western Anatolia, a once larger “Asia” lived on. This country Asia, as it was called by the population already during the second half of the 2nd millennium BCE, was referred to as Aššuua [an alliance of Luwian petty kingdoms] by the Hittites of the great kingdom and it included at times almost the entire west coast of Anatolia. It was an entity to be considered a mighty power that maintained active trading relations with distant Egypt and was not afraid of armed raids against the Hittites. … The Mycenaean Greeks, whose immigration into western Asia Minor began around 1500 BCE, heard the name “Asia” from local people at a time when it referred to a great realm whose extent to the east could not be fathomed by the first Greek settlers near the sea.