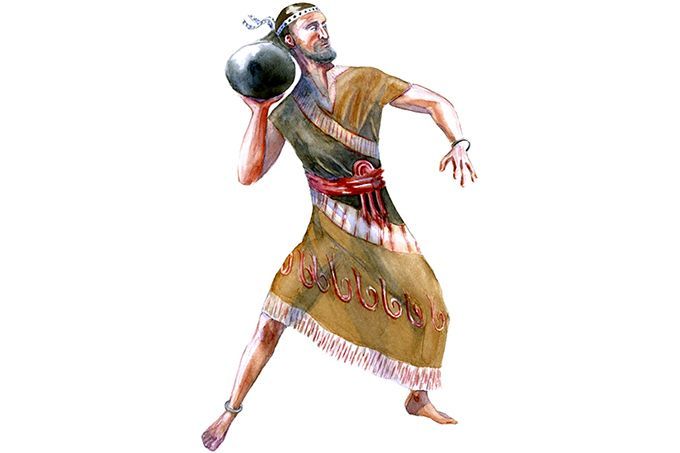 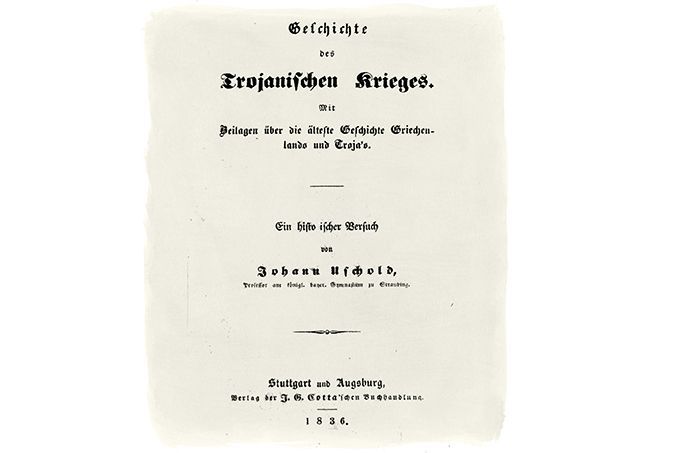 This Syrian noble man features thick black hair that is held back by a dark hairnet. A cape is wrapped around his robe. (© Rosemary Robertson)
In his book Geschichte des Trojanischen Krieges (History of the Trojan War), published in 1836, Johann Uschold said how the kingdoms in western Asia Minor blossomed after the end of the Bronze Age.

During the Early Iron Age, the Phoenicians settled on the Mediterranean coast of modern-day Lebanon and established themselves as sophisticated artisans and maritime traders. In terms of their skills and habits, there are clear parallels to the inhabitants of the Late Bronze Age western coast of Asia Minor. It is quite possible that after the crisis years parts of the local population migrated to Phoenicia and helped establishing Phoenician cities there.

The Phoenician culture stands out, among other reasons, because it had almost no territory. Its heartland was only a narrow, rugged strip of river valleys along the Syrian, Lebanese and Canaanite coast of the Mediterranean Sea. After the destruction during the crisis years shortly after 1200 BCE and subsequent reforms, Phoenician merchants conducted their business with the few commodities available at the time. However, it soon dawned on them that arts and crafts would generate the highest margins. It was then that the Phoenician population began to produce textiles, furniture, ivory carving, glass and metal goods that were valued throughout the Middle East and the Mediterranean. In regard to the processing of precious metals, Phoenician artisans set new standards. Thus metals were also transported over long distances, together with luxury goods and spices. In the 12th and 11th century BCE, iron gradually replaced bronze.

The Phoenicians founded maritime bases abroad to help them control the largest possible sections of the trade routes. These settlements developed into manufactories and factories. The Phoenician maritime trade followed routes that were already used during the Late Bronze Age. Its primary focus was on ore deposits in Cyprus, Sicily, Sardinia, Etruria and southern Spain, as well as on several islands in the Aegean.

The Phoenicians were also excellent hydraulic engineers. Near Dor, Israel, one can still find docks built of ashlar masonry as well as paved platforms. In the port city of Haifa, north of Achziv, the inhabitants had carved semicircular basins out of submarine platforms created by abrasion that reached far off into the sea. In Sidon, they had developed a hydraulic system of basins and channels in which the wind largely determined the water supply. It channeled sediment-free water into the basin and prevented the ports from silting up.

The texts on the walls of the Egyptian mortuary temple at Medinet Habu and various documents show that some of the Sea Peoples settled in Canaan. These immigrants had great skill in navigation and shipbuilding and were likely to have acquired a certain audacity during many years of conflict. In contrast, the traditional inhabitants of Canaan regarded themselves as solid artisans and specialists of maritime trade. Both populations together would have been predestined to create a culture such as that of the Phoenicians.

British archaeologist John Manuel Cook realized that the coasts of Lebanon and the locations of its port cities showed great similarity to the Aegean coast of western Asia Minor. In both cases, the coastal cities are not only far away from the relatively landlocked country, but also isolated from one another.

It is possible that, after the crisis years, some of the survivors from kingdoms of western Asia Minor moved to what is now Lebanon and contributed to the foundation of Phoenician cities there. Consequently, maritime trade routes of the Phoenicians followed the ones previously established during the Late Bronze Age. Of the Carians, a Luwian people, it is said that they maintained an outpost in Libya (Pausanias 3.1.1 and 4.1.1). In turn, settlers from the Phoenician city of Tyre founded the trading post of Carthage, located in modern Tunisia, in the 9th century BCE, which later achieved great power. The close connection between Luwians and Libyans during the Sea Peoples’ invasions may have been renewed during the Early Iron Age in the form of the axis Phoenicia-Tunisia.

Obviously, the trade routes of the 2nd millennium BCE never fell completely into oblivion during the so-called Dark Age that fell between Bronze and Iron Age.

For Minos was the most ancient of all that by report we know to have built a navy. And he made himself master of the now Grecian Sea, and both commanded the isles called Cyclades … expelling thence the Carians and constituting his own sons there for governors.