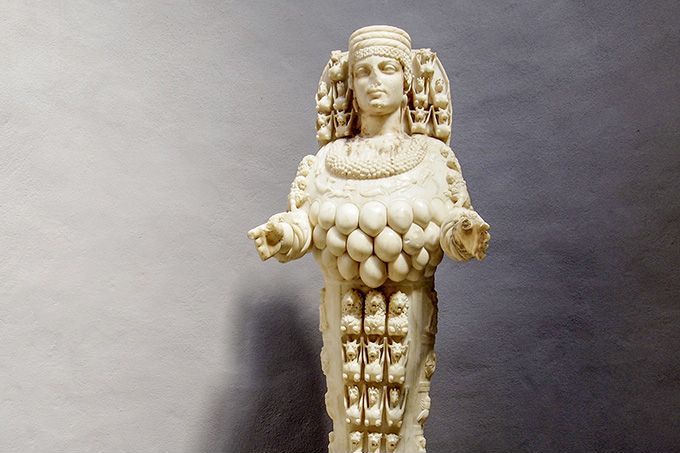 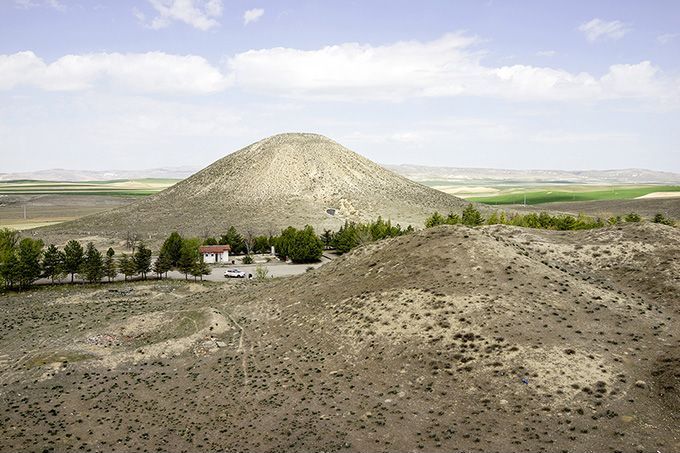 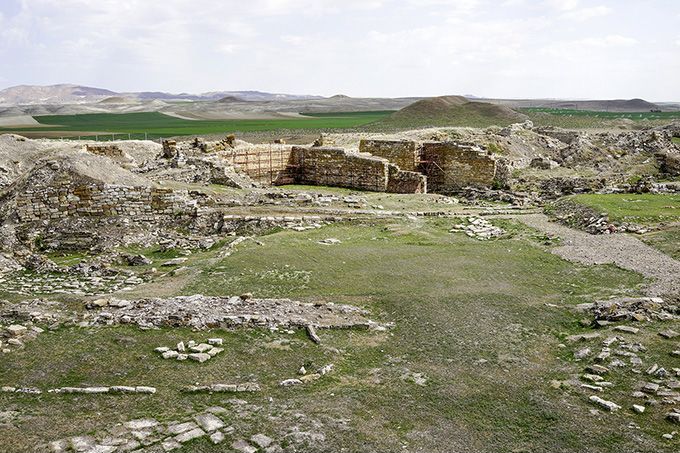 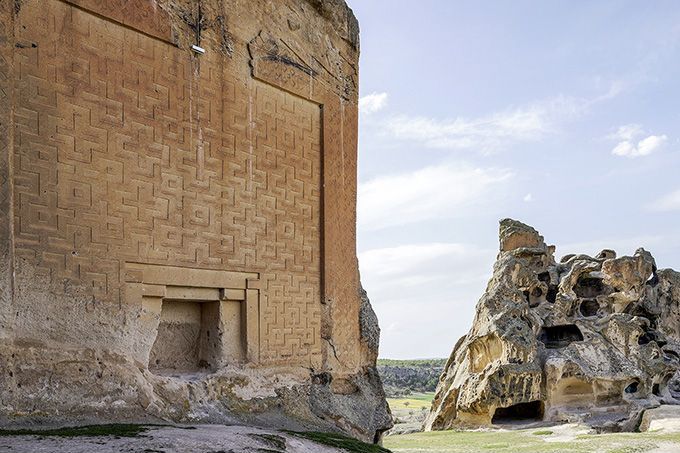 The Artemis of Ephesus probably represents a transitional form of the former Phrygian mother goddess Cybele to the Greek and later Roman goddess.
The large tumulus of Gordion is about 50 meters high and 300 meters wide. The grave contained the remains of a 60-70 year old noblemen; probably King Gordios.
Gordion, the capital of Phrygia, was located at the intersection of a trade route to Babylon and the valley of the river Sangarius.
The Midas Monument in Phrygian Yazılıkaya about 50 km from Afyon includes on the right margin a Phrygian inscription whose last word can be deciphered as Midas.

The area of western Central Asia that later became Phrygia was part of the Hittite Empire. After the fall of the empire the capital Gordium had initially been abandoned but was resettled shortly thereafter – possibly by immigrants from the Balkans, who mixed with the local population. The kingdom of Phrygia, which probably consisted of a coalition or confederation of various principalities, was considered to be fabulously wealthy. Excavations at Gordium do not extend to Bronze Age settlement layers. Findings of Luwian hieroglyphic writing, however, suggest that the Phrygians were able to base themselves on cultural achievements of their Luwian predecessors.

During the 13th century BCE, western central Asia Minor was part of the Hittite Empire. According to administrative documents from Assyria, a group of people named Muški seems to have existed on the territory of the collapsed Hittite Empire for several centuries. A certain Mita of the Muški has been repeatedly recognized as powerful potentate in central Asia Minor at the end of the 8th century BCE. According to Greco-Roman historiography, the influential king Midas reigned over the Great Kingdom of Phrygia at that time.

Royal residence and capital of the Phrygian kingdom was Gordium, which was located close to where the Porsuk drains into Sakarya River (the ancient Sangarius). The town, which had been settled over the entire Bronze Age, was located at an important east-west route that had already been frequented intensively during the Late Bronze Age. When the Hittite Empire was destroyed in the early 12th century BCE, Gordium was abandoned by its residents. Soon after, however, new populations settled there. In the 10th century BCE, a citadel protected by ramparts went up, and a palace district was built in the same place during the 9th century. Around 800 BCE the palace fell victim to a fire. At that time, other cities in central Asia Minor (Ankara, Alişar, Hacıbektaş) displayed a Phrygian presence. In Hattuša, a Phrygian city was built that covered the entire area of its Hittite predecessor. During the 8th century BCE, the Phrygian kingdom of Dascylium in northwestern Asia Minor extended to Tyana in Taurus. The kingdom’s central locations were Gordium and Midas city. Near Gordium, a royal necropolis with large tumuli went up, of which the most famous one, the so-called Midas Mound, was built around 740 BCE. Archaeologists were able to explore the intact grave, which also contained a great number of valuable burial gifts. They found the skeleton of a 60- to 70-year old unidentified man.

The Phrygian language clearly does not belong to the Anatolian language group. In order to write Phrygian, an alphabetic script was used that had been transferred from Phoenicia and resembled Greek.

In Midas’s hands everything turned to gold

A Homeric Hymn (no. 5, To Aphrodite) mentions that Phrygia possessed many fortresses. In the Iliad, Homer states that the Phrygians were “aggressive” (2.864) and riding on horses (10.432), which apparently was rare or even unique at the time. Strabo (12.4.4; 14.5.29) describes Phrygians as “barbarians and warriors” who had migrated to Central Asia from Macedonia and Thrace around the time of the Trojan War. According to Homer, during the Trojan War the kingdoms of the southeastern Balkans had fought on the side of the Trojans. If troops from these regions had actually been involved in the Sea Peoples’ invasions and had thus contributed to the fall of the Hittite Empire, their migration to central Asia Minor would make sense: The victorious powers would have taken over key trade routes that previously had been on Hittite territory. One counter argument against possible immigration from the Balkans, however, is that the Phrygian language is not related to Thracian.

The city of Gordium, supposedly named after its founder Gordias, has been explored archaeologically since 1950 and is considered the only extensively researched city of influence during the Early Iron Age in Asia Minor. The excavations demonstrate that the location has been inhabited since at least 2500 BCE. The Bronze Age settlement layers of Gordium, however, are not well known, because they are hidden under the foundations of the Phrygian era. Findings of Luwian hieroglyphic writing indicate to which civilization this place belonged.

Gordium’s development as a city peaked only after the fall of the Hittite Empire. The immigrants did not completely oust the local population, but rather complemented them. Apparently, the immigrating Phrygians kept in touch with their country of origin, which contributed to the empire’s enormous economic success. The Phrygian kingdom was likely composed of a coalition or confederation of various principalities. The American prehistorian Machteld Mellink described the west Phrygian culture as “incredibly powerful,” and expressed the opinion that many of its achievements rooted in the previous – almost unknown – Late Bronze Age culture. Behind these words, one might argue today, lies the hidden Luwian culture. Those who want to learn more about the Luwians would only need to dig one to two meters deeper into the ground at Gordium.

The fabulous wealth of Phrygian kings, among whom the names of Gordias and Midas were apparently common over several generations, has been preserved in the legend of king Midas, in whose hands everything turned to gold. When Midas bathed in the Pactolus River (today Sart Çayı), he transferred this gift to the river, thereby turning the Pactolus into the richest gold-carrying river and the kings of Sardis on its banks into the wealthiest rulers of Asia Minor at the time.

According to Herodotus, even the Egyptians considered Phrygians to be the most ancient people:

When Psammetichos [II] having become king desired to know what men had come into being first, they suppose that the Phrygians came into being before [the Egyptians].

It is possible that the Phrygians were among the “People of the Sea,” who also have been credited with the destruction of Hattuša.

Many features of the West Phrygian Culture were undoubtedly inherited from the West Anatolian culture of the Late Bronze Age.