A number of posters A2 or A3 in size illustrate the main findings of Luwian Studies. If you are interested in receiving a set of posters please contact us. 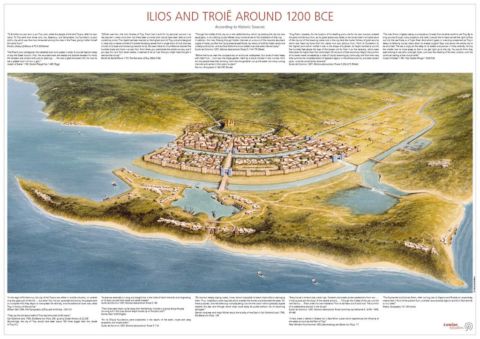 Reconstruction of Ilion and Troy around 1200 BCE (59.4 x 42 cm)
Artist’s impression of Troy, based on descriptions from historical sources with quotations from ancient and medieval literature. © Christoph Haußner

The thus far known archaeological site of Troy represents only a royal citadel. In all likelihood, the city itself was located in the alluvial plain below the citadel. Its ruins are still buried there under about five meters of floodplain deposits. Numerous sources from antiquity to the medieval suggest what the real Troy looked like at its peak. Some of these statements are provided on the poster. The artistic reconstruction is based on these transmission. 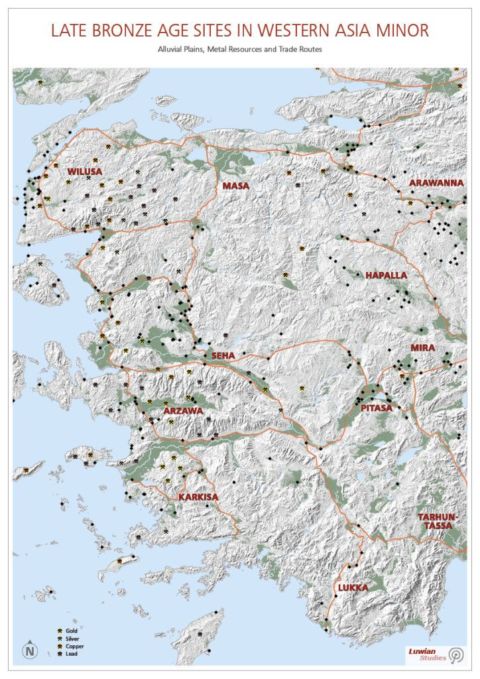 This is an extract from the map of the eastern Mediterranean and focuses on the newly registered Late Bronze Age archaeological sites in the west of modern Turkey, showing them in their geographical setting. Of the 340 settlements, only two have been excavated on a large scale and published in a Western language: Troy and Beycesultan. 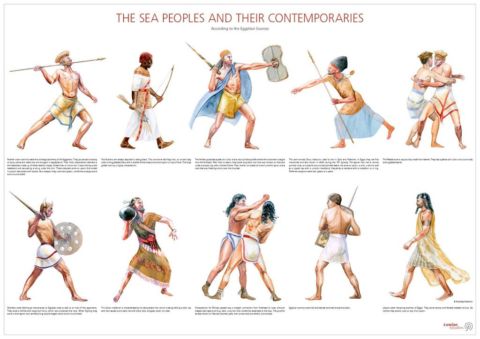 The Sea Peoples and their contemporaries around 1200 BCE (59.4 x 42 cm)
Reconstructions of the external appearance of Late Bronze Age people from around the eastern Mediterranean region on the basis of Egyptian grave paintings and glazed pottery. © Rosemary Robertson

The ethnic groups differed in terms of skin color, hair style, clothes and weapons. Since the representations in the Egyptian paintings and painted pottery are quite specific, the appearance of the warriors can be reconstructed in much detail. 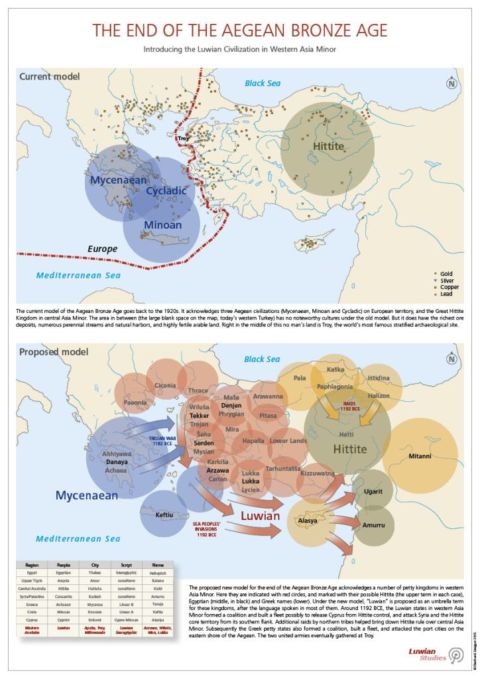 The currently valid model for the Aegean Bronze Age (above) goes back to the 1920s. Three civilizations existed in the Aegean area (Mycenaean, Minoan and Cycladic), and were contemporary with the Hittite Empire in Central Asia Minor. According to this model, the large region between the Hittite Empire and the Mycenaean petty kingdoms contained no significant culture; despite the fact that this region is particularly rich in ore deposits and arable land. With Troy, it also hosts the world’s most famous stratified archaeological site. – In the proposed new model, the petty kingdoms in western Asia Minor that have been known for a long time are finally acknowledged. The umbrella term “Luwian civilization” is introduced to designate people and places who existed in this area during the Late Bronze Age. 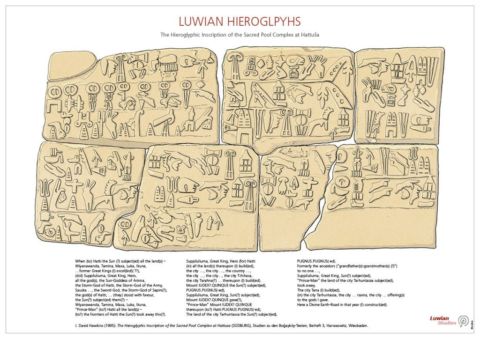 The hieroglyphic inscription on the western inside wall of Chamber 2 in Boğazköy (Hattuša) was discovered during excavations in the SÜDBURG areal in 1988. It is about 4 meter wide and 1.8 meters tall and the best preserved inscription from the Empire period. The signs are worked as reliefs in limestone with the background cut away, as is normal for these Luwian inscriptions. The text begins in the upper right corner and then continues boustrophedon (i. e. turning like oxen in ploughing). The second line (left to right) lists a number of deities indicated by oval signs. The third line lists cities, marked by mountain symbols. The Great King Suppiluliuma is said to have conquered these places, but it is still uncertain, whether the first (1355–1320 BCE) or second king (1205–1192 BCE) by this name was meant.