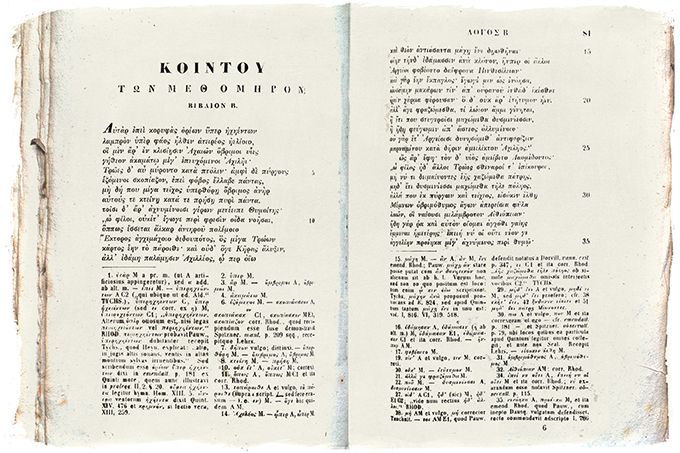 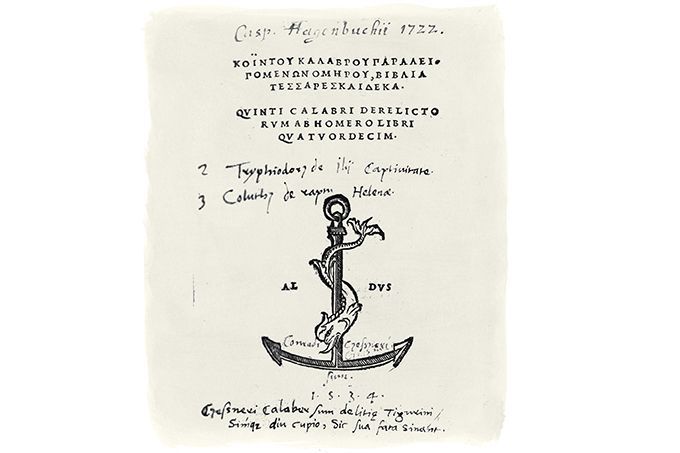 In the third century CE, Quintus Smyrnaeus published a version of the epic cycle entitled Posthomerica, in which he imitated the style of Homer. With his work, Quintus intended to close the chronological gap between the Iliad and the Odyssey. Various details of his descriptions of Troy correspond remarkably well to excavation findings.

Quintus of Smyrna was an ancient Greek poet who probably lived in the 3rd century CE. He produced just one epic that is still extant. His work is mostly referred to by its Latin title Posthomerica, and thus the poet’s name is also rendered in the Latin form Quintus Smyrnaeus. Quintus transmitted the stories about Troy using a variety of sources without identifying them.

His work is a sequel to Homer’s Iliad and begins exactly where, according to Homer, the Trojan War ends. In 14 books with a total of 8772 verses, Quintus relates the legendary events that had taken place during the last few weeks of the war, from the fall of Troy to the beginning of the Odyssey. His work is divided into many successive, more or less independent stories, and these are each largely self-contained. The only surviving manuscript of Quintus’s epic was discovered around 1460 by Cardinal Basilios Bessarion in Otranto, Calabria, and the first printed edition of the work attributed to the workshop of the Venetian printer Aldus Manutius appeared in 1504.

The ruins of Troy disappeared beneath the mud

Quintus intends to close the chronological gap between the events that had been recounted in the Iliad and those described in the Odyssey. He therefore mimics Homer in terms of vocabulary, language, syntax, meter and rhythm, parables, narrative style and construction. Like Homer, Quintus also focuses on the people, their dialogues and actions. Evidence that would allow conclusions to be drawn about the topography of the city of Troy and its surroundings are rare and appear primarily in the form of attributes. It is said of Troy that it was “strong-walled” (9.539) and had “enormous walls” (12.89).

Still, some parallels to excavational finds from Troy can be found in Quintus, which raises the question as to where the poet may have received his information. For example, it is said that the Mycenaeans, in order to protect themselves from attacks by Trojans, erected fortification walls and towers at their homes (14.633). This could be regarded as a hint at the construction of the Cyclopean citadels in Mycenaean Greece around 1250 BCE. Elsewhere Quintus explains how the Trojan citizens prepared themselves for siege:

Nor do we have any lack of food and drink.
In the palace of wealthy Priam abundant supplies
Are safely stored away, so that even greater numbers
Gathered for a lengthy period would enjoy
Sufficient food, supposing another army three times
As large should come here eager to help us in our need.

These lines correspond with the architectural realignment of Troy VIIa after the destruction of Troy VIh which may have occurred around 1250 BCE (some archaeologists now favor a date around 1300 BCE). At that time, large storage jars were created under the floors. Quintus also describes in dramatic terms how the victorious Greeks “brought the women of Troy from all directions” (14.11). The latter statement matches information that was found in the Linear B tablets from Pylos, where women from western Asia Minor are mentioned specifically as workers in textile factories.

However, the most striking parallel does not concern excavation findings, but Plato. In the last lines of his work, Quintus describes what happened to the ruins of Troy after the city had been ravaged by the Greeks:

Poseidon himself tore open
The bowels of the earth and caused a great upward gush of water
Together with slime and sand. With all his might he shook
Sigeion, making the beaches rumble, and Dardania
From its foundation. So that enormous fortress vanished
Under the sea and sank down into the ground
When it yawned asunder. Only sand could still be seen,
When the sea had retreated.

Something quite similar to such torrential floods can also be found in Plato’s Timaeus 25d.

In a sad way the old age of the heroic epic turned childish and prostituted itself in form of the Posthomerica of Quintus of Smyrna. He transmits trivial passages of the heroic saga, which had been read at school, into Homeric verses, and the barren parroting would euthanize if the follies would not sometimes become so strong that one breaks out in laughter.

Among the late Greek epic poets Quintus is by far the worst. The anaemic pastiche served up by Quintus is utterly devoid of life.

What a blunder of the Muses, that they, like Quintus indicates (12.308), appointed just him to be the epic poet, him – we may summarize the opinions – the worst poet of antiquity.

To begin a book about a poem by discussing negative views of it, only to rebuff these views by means of one’s own innovative scholarship, has become clichéd practice in the re-evaluation of traditionally non-canonical Classical texts.

The neglect of this poem has been remarkable.