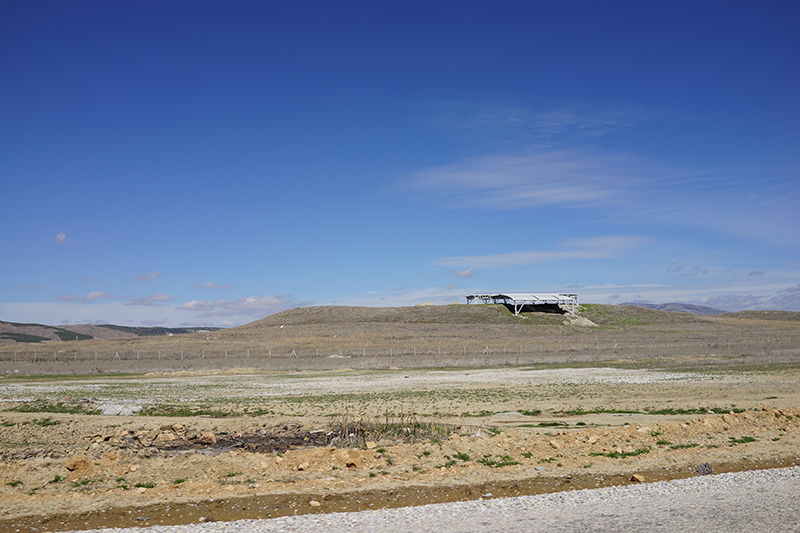 The tell settlement, approximately 500 x 800 m in size, is one of the largest in western Asia Minor. It is situated 5 km south of the county town of Çivril in the district of Denizli. The site was excavated by James Mellaart and Seton Lloyd from 1954–1959. A second excavation campaign began in 2007 under the direction of Eşref Abay from Ege University. The hill covers about 4 hectares and is 35 m tall. Mellaart distinguished 40 different cultural layers ranging from the late Chalcolithic to the Byzantine period. Already during the Chalcolithic rectangular rooms with mudbrick walls and stone foundations and benches along the walls were built. Mellaart regarded these as the predecessors of megarons. During the Early Bronze Age I well-protected Megaron-like structures with porticoes in the front and a fireplace in the main hall occurred. The pottery consists of beak-spouted jugs, cups with raised spouts, flasks, tall necked jugs and jars. Next to the large constructions are small temples with offerings and sacred horns. The Early Bronze Age III brought potter’s wheel production. The excavators explain this development with the arrival of Luwian people in Beycesultan. Megaron-shaped houses with a central fireplace are the characteristic form of architecture formation for this period.

According to the excavators, Beycesultan was one of the main cities in the Arzawa kingdoms of the the Middle Bronze Age. On the eastern side of the tell, layer V revealed a palace that was built in the time of the Assyrian trade colonies (c. 1900 BCE) and has not been completely excavated. It was separated from the lower parts of the town by a wall.

The planning and design of the palace has much in common with later Hittite palaces. Entrances were found on the east, the west and a side entrance in the south. The west entrance was the main entrance. Stairs indicate that part of the building had two stories. On some walls traces of color were discovered. Accordingly, the insides of the rooms were painted with pictures much like in Middle Eastern palaces. A fragment of a hieroglyphic seal was found dating to almost 2000 BCE. It is the earliest documentary proof for Indo-European language. The palace eventually burnt down during the 17th century BCE. Mellaart attributed the destruction to the Hittite king Hattusili (reigned 1650 –1620 BCE).