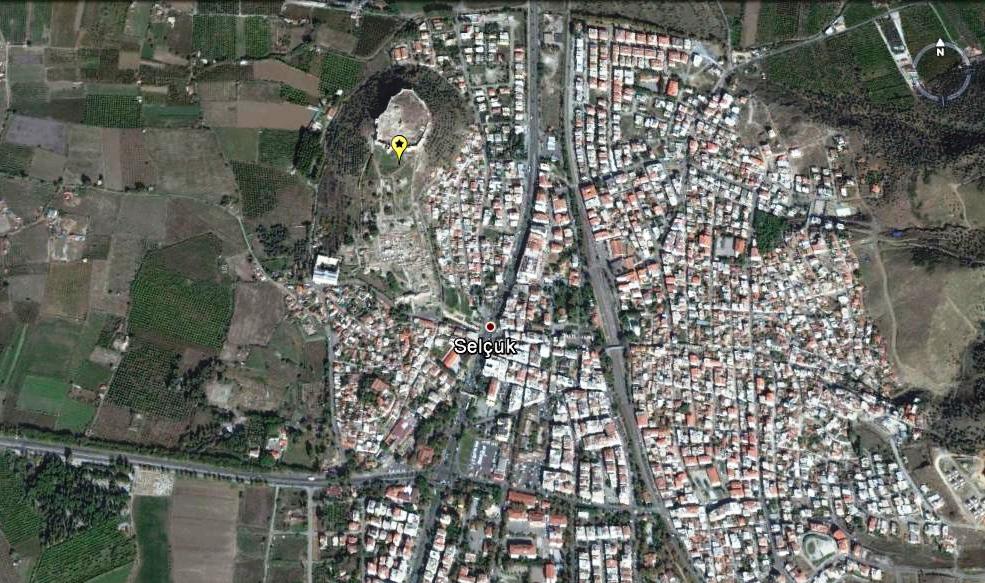 While many settlement sites in western Asia Minor have been inhabited throughout the entire Middle and Late Bronze Age, those places on the coast at shallow marine embayments have tended to move seaward following the receding shoreline. It has therefore been clear, that the predecessor of Roman Ephesus must have been further inland of the famous archaeological site. Many scholars assume that this predecessor was Apaša, the capitol of Arzawa as mentioned in Hittite documents. Inland of Roman Ephesus is the modern town of Selçuk with the Ayasuluk Hill being its most outstanding Landmark.

A rescue excavation conducted in 1960 on the Ayasuluk hill, south of the Gate of Persecution, led to the discovery of a Late Bronze Age grave which yieled Mycenaean vessels. One crater contained human bones, while the surrounding area revealed animal bones. According to Barbara Horejs, the grave reflects local funeral customs in which Mycenaean grave goods were included. The pottery dates to Late Helladic IIIA2 (c. 1400-1340 BCE).

Restauration work on the Late Roman fortification wall on the Ayasuluk hill in 1990 lead to the discovery of a Late Bronze Age citadel wall and of several distinct periods of habitation. The earliest pottery found dates to the Kumtepe IB period of the 4th mill. BCE. Crevices in the bedrock revealed Early Bronze Age (2920–2450 BCE) ceramics. Middle Bronze Age settlement layers rest in some places right on bedrock. A strongly burnt horizon contained material culture comparable to Urla-Limantepe and Troia III-V (2300 – 1700 BCE). Pottery of Beycesultan with red coating was also identified.

Further excavations on the Ayasuluk hill in 1996, about 30 m south of the previous one, revealed the same Late Bronze Age fortification wall in a depth of 3.3 m. A Mycenaean grave was found on the south side of the Ayasuluk hill and Late Mycenaean pottery is also known from the Geometric Periptero of the Artemision. However, the vast majority of the pottery was locally made.

The excavations on the Ayasuluk hill during the 1990s illuminated the Bronze Age past of the place at least partially. The Ayasuluk hill is now widely regarded as being the site of Apaša. After Stefan Karwiese Apaša in Luwian means bee. In fact, the bee has been the symbol of Ephesus in Archaic to Roman times and appears on coins minted there.

At Luwian Studies we regard the Ayasuluk hill to have been on the outskirts of Apaša. We have a clear working hypothesis where the actual center of Apaša might have been and are anxious to pass this idea on to a potential excavator.