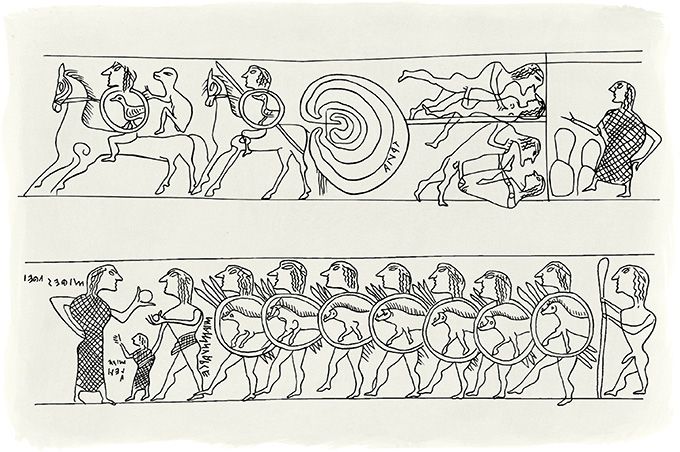 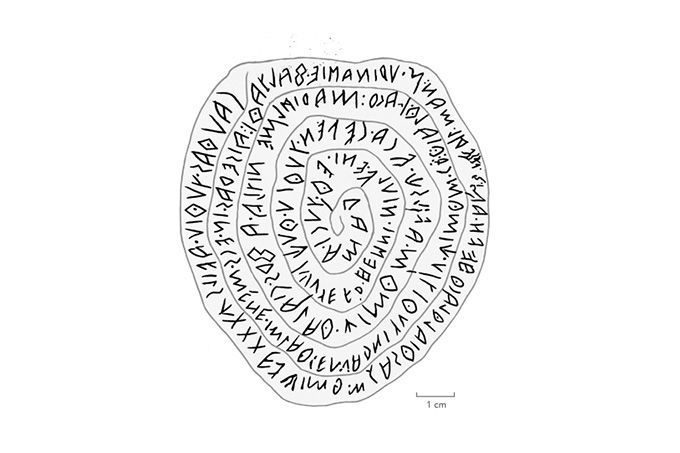 Graffito on the so-called wine jug from Tragliatella. It shows a labyrinth that is inscribed as “Truia.”
This lead disk was found in Magliano in the Toscana near Grosseto (Italy) in 1883 and bears an Etruscan script dating to the 5th or 4th cent. BCE.

In ancient Greece, a theory had already existed that the Etruscans in north-central Italy originally came from western Asia Minor. Recent findings in the area of genetic research support this thesis. Furthermore, grave architecture, engineering, and language suggest that the Etruscan culture has Anatolian features.

The origin of the Etruscans, who lived in north-central Italy, is still a subject of discussion. The Etruscan culture probably formed locally, but it is unclear whether it originated from the indigenous population or through immigration. The origin of its language, too, has not been clearly determined.

Already in ancient times there were two different hypotheses to these questions: Some writers argued that the Etruscans originated from Lydia in Asia Minor, and had migrated after 1000 BCE to the territory of modern day Tuscany. This thesis is supported by apparent similarities in the languages and arts. Genetic research, too, strengthens this view: gene sequences have shown that even some of the Tuscan cattle are related to those from northwestern Asia Minor.

In ancient Greece it was commonly believed that the Etruscans originated from northwestern Asia Minor. Herodotus wrote (1.94) that emigrants from Lydia had founded the later Etruscan settlements in central Italy. They were reported to be well-versed in seafaring, trading, arts and crafts and thus laid the basis for the Etruscan and, subsequently, the Roman culture. Aeneas, a descendant of the ruling dynasty of Troy, is considered to be the founder of the ancient Roman dynasty that succeeded that of the Etruscan in ruling on Italian ground.

The hypothesis that, after the crisis years, some of the Luwians settled in today’s Italy can be substantiated by archaeological finds. Especially when it comes to the monumental tomb architecture and burial gifts, there are clear parallels with Asia Minor. Burial customs change particularly slowly; and the impressive burial mounds in central Italy show a striking resemblance to the extensive tumulus fields near the old Phrygian and Lydian capitals. Like their Late Bronze Age predecessors, individual Etruscan cities never formed a union. They remained independent city states, which at best formed a loose confederation.

Etruscan engineering was of the same caliber as the hydraulic engineering during the Late Bronze Age. In Italy, entire schools were devoted to the study of hydraulic engineering. Even after Etruria had been subjected to Roman rule, the Romans consulted graduates of these schools for difficult technical projects. The main task consisted of drying up wetlands in floodplains and coastal plains. The surplus water was then redirected to arid fields via a sophisticated drainage system. Near Orbetello, in the Tuscan province of Grosseto, a unique coastal regulation was installed that still works today, which included well thought-through artificial canals and tunnel route currents and counter currents alternately to prevent silting.

Above all, the Etruscan language seems to be so closely related to the Indo-European languages of Asia Minor that linguists have even interpreted Etruscan as a “colonial Luwian language.” A number of Etruscan words and personal names correspond to Luwian counterparts. Such a relationship is also suggested by the so-called Disc of Magliano, a circular lead disc 8 centimeters in diameter, which came to light around 1883, most likely through illegal excavations in the province of Grosseto in Tuscany. It was probably found in a burial ground dating to sometime between the 7th to 3rd century BCE and is now exhibited in the Archaeological Museum in Florence. The disc is engraved on both sides in a spiral arrangement running towards the center using Etruscan script. With about seventy words, this is one of the longest Etruscan texts. The form and type are reminiscent of the Phaistos Disc.

So the King divided the population in two groups and determined by drawing lots which should emigrate and which should remain at home. The lots were drawn and one section went down to the coast at Smyrna, where they built vessels, put aboard all their household effects and sailed in search of a livelihood elsewhere. They passed many countries and finally reached Umbria in the north of Italy.

About this time two brothers, Lydus and Tyrrhenus, were joint kings in Lydia. Hard pressed by the unproductiveness of their crops, they drew lots to see which should leave his country with part of the population. The lot fell upon Tyrrhenus. He sailed to Italy, and from him the place wherein he settled, its inhabitants, and the sea received their famous and their lasting names.

The city of Rome, according to my understanding, was at the outset founded and inhabited by Trojans, who were wandering about in exile under the leadership of Aeneas and had no fixed abode.

I am amazed that the Italians are allied against me, given the fact that we have common origins in the Trojans and they have as much interest as I in avenging the blood of Hector on the Greeks.