The History of Troy 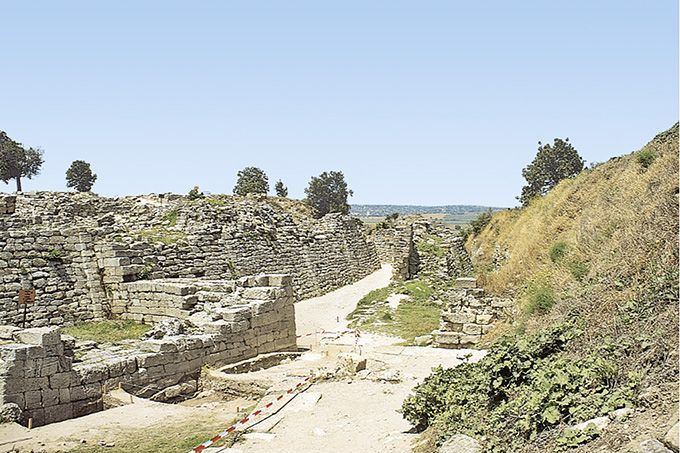 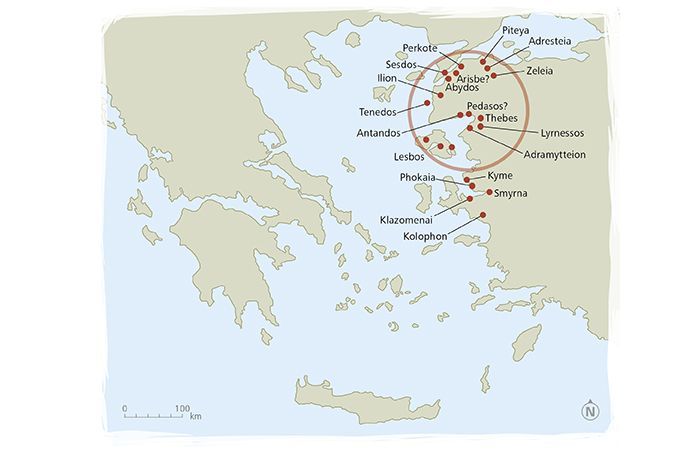 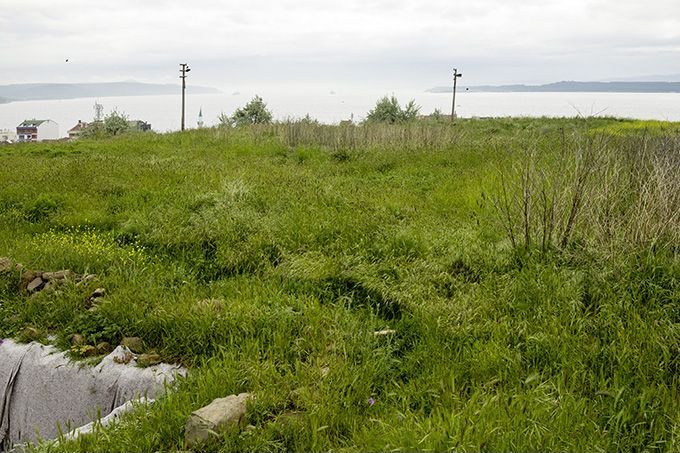 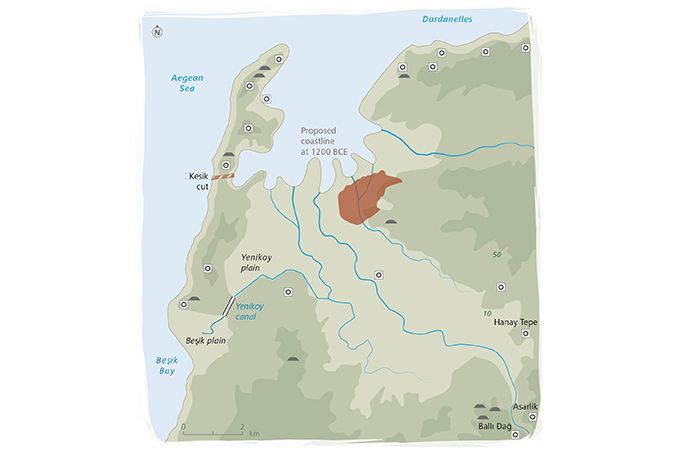 The North East gate of Troy VI (photo taken in 1991).
Circled: Approximate expansion of the kingdom of Troy according to Homer (Iliad) 24,546). Dots: places destroyed by Achilles according to Homer and other sources.
View from the tell site of Maidos in today’s Eceabat on the north shore of the Dardanelles onto the waterway towards the east.
If the extent of the fortified city of Hattuša is projected into the plain of Troy it would cover the area shown in this map.

Archaeologists say that Troy has become famous mainly through the epics of Homer. Many scholars have long doubted the existence of Troy altogether. Today, however, it is generally accepted that the archaeological site on the Hisarlık hill in northwest Turkey, on the southwest entrance to the Dardanelles, was that of the Bronze Age settlement. Already in the 3rd millennium BCE a fortified citadel had been erected on this knoll. The settlement was at its peak between around 1700 and 1200 BCE. The size of Troy and its role at the end of the Bronze Age are still highly controversial subjects.

For a long time the existence and location of Troy ranked among the most controversial topics in archaeology. Today the majority of researchers assume that the settlement mound on Hisarlık, located at the southwest entrance of the Dardanelles, matches the Troy sang of in the Homeric poems. As early as the 3rd millennium BCE a fortified citadel arose on this hill. The settlement reached its peak of prosperity between 1700 and 1200 BCE. Later, during the Roman Empire, Troy and its heroes were still highly revered. At the beginning of the medieval period, however, the place fell into oblivion and its location was eventually forgotten.

To this day, the size and importance of Troy is still fiercely debated. Some researchers think that the settlement was of regional significance only, while others see Troy as an important commercial center with far-reaching relations. The Troy debate between the former excavator Manfred Korfmann and his peer in Tübingen, historian Frank Kolb, a debate that was for the most part conducted publicly, ultimately did not result in any clarification.

The historicity of the Trojan War, as described by Homer in the Iliad, is uncertain as well. It is clear, however, that the settlement was destroyed shortly after 1200 BCE. Hittite documents indicate that both Hittite and Mycenaean kings were trying to expand their influence along the Aegean coast of Asia Minor. An attack by the Mycenaeans would, therefore, be plausible but cannot be proven.

The myth of a former city – Not a fiction

In principle, there are two ways to explain the outstanding significance of Troy in European cultural history. Most prehistorians and historians, including the longtime excavator of the archaeological site Manfred Korfmann and his assistant Peter Jablonka, attribute the importance of Troy to Homer’s poetry. From their point of view, people have glorified Troy for thousands of years because of the Iliad – even though the place itself is not spectacular, as the excavations have uncovered only a settlement of relatively modest size.

There is much that speaks against the idea that Troy’s fame is derived from Homer’s. First of all, Homer was a Greek writer who wrote a poem in Greek about Greek heroes that ended a mighty war through a victory brought about by their Greek forces. How and why should subsequent generations (for over 2000 years!) glorify not the victors but rather the little place that was pummeled by the Greeks? If Homer’s poems made the Trojan War famous, then Roman aristocrats and the people of Europe should have claimed descent from the victorious Agamemnon and his hometown Mycenae, rather than from the losers of the Trojan War. Secondly, many details transmitted about Troy during its heyday are not even related by Homer. So, there must have been other sources in addition to Homer. Thirdly, the Troy theme was especially popular during the medieval period, a time when Homer’s work was not available and was considered lost.

The second possibility, and the one favored here, is that Troy became a myth because the location and its downfall actually were of great significance. Homer’s work therefore benefited from the importance of Troy, not vice versa. Regarding the size and importance of Bronze Age Troy, there is scope for models that are quite different from the prevailing paradigms. It is conceivable that the city was much larger, even a hundredfold larger, than was assumed until 1992. Despite more than 140 years of excavation history, only the citadel hill has thus far been explored. According to various ancient texts, this residence of royal families was surrounded by a park. The actual city of Troy was located in the floodplain of the Karamenderes and Dümrek Rivers (Diodorus 4.75.3). The Trojan kings had engaged outstanding hydraulic engineers who channelized the rivers, so that their water could be used for irrigation as well as for cleaning the city (see Guido de Columnis). During the Trojan War, the Greeks are likely to have destroyed levees and hydraulic installations. Since the war was fought in the dry summer months, their actions had no immediate effect. But when the winter came, with Troy already defeated and destroyed, the topographically low-lying ruins were buried under mud carried by the rivers. Thus, the remains of Troy are likely to be buried a few hundred meters west of Hisarlık, and remain hidden. Excavator Manfred Korfmann has said (in a personal conversation) that drill holes in the floodplain revealed pottery deep down below the present surface. The geoarchaeologist who investigated these deposits for almost forty years concluded, “some levels contain a great deal of archaeological material … Pieces of bricks, stones and mortar indicate the remains of a construction. … From an archaeological point of view, the area along the foot of the northern slope of Troia is an important one … In the light of these findings we consider that it would be very useful to make an archaeological excavation about 7 meters deep.”

In its heyday Troy was indeed the epitome of a thriving city – which is why it became such a symbol in European cultural history. Few visitors who had experienced Troy in its glory were likely to have ever seen anything to surpass it.

I am extremely disappointed at being obliged to give so small a plan of Troy; nay, I had wished to be able to make it a thousand times larger, but I value truth above everything.

A great number of the Bronze Age settlements in western Anatolia were probably Luwian foundations, or re-foundations, like Apasa, predecessor of Classical Ephesos, Beycesultan, and perhaps also Troy VI.

To Erichthonius was born a son Tros, who called the people of the land Trojans, after his own name. To Tros were born three sons, Ilus, Assaracus, and Ganymedes. Ilus founded in a plain a city which was the most renowned among the cities in the Troad, giving it after himself the name Ilium.