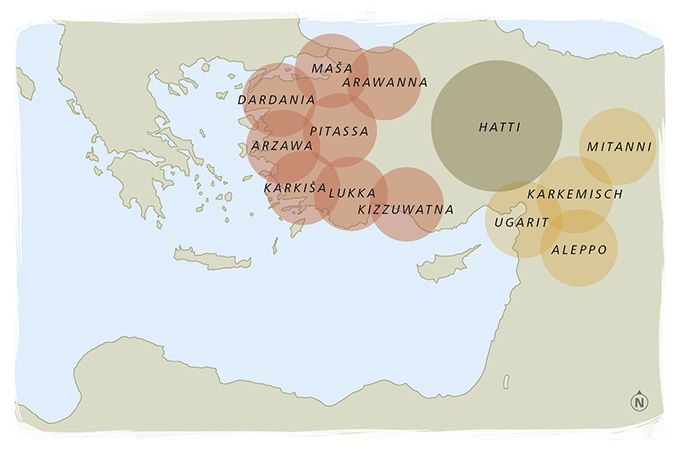 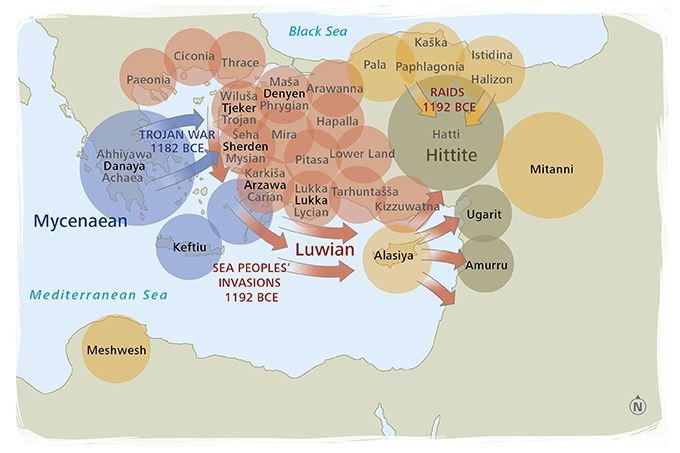 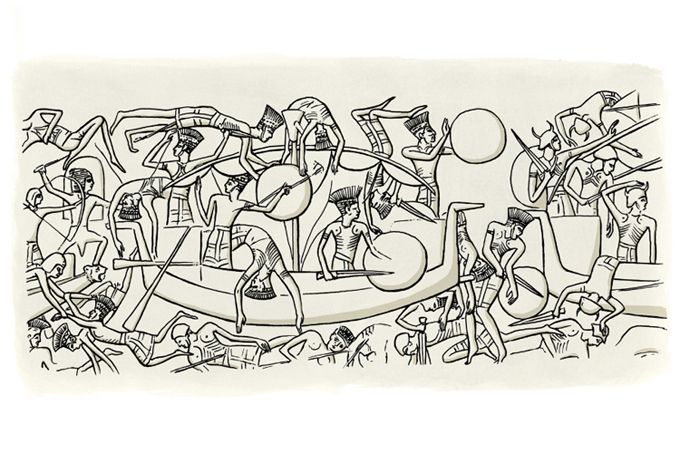 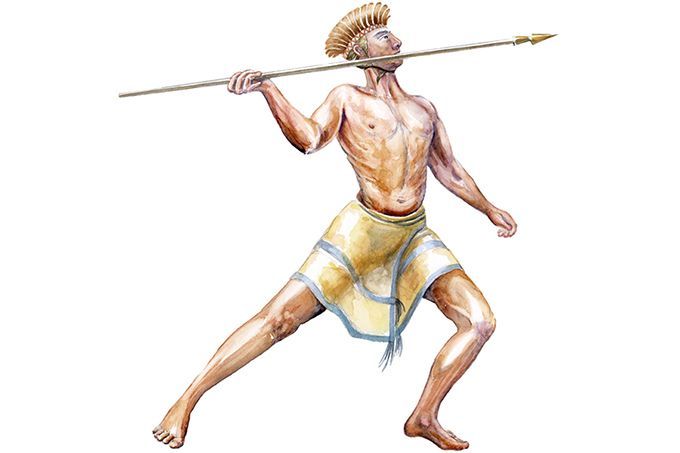 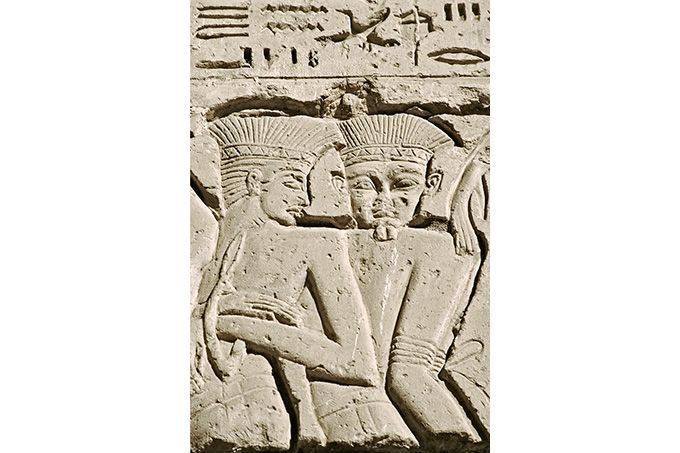 The provenance of the Hittite mercenaries during the Battle of Kadesh. Several of these ethnic groups were listed as being members of the Sea People.
The Sea Peoples can be traced back to the Aegean. Apparently they consisted of Luwian petty kingdoms, who had formed an alliance and attacked Hatti from the south.
Depiction of Sea Peoples’ invasions at the Mortuary Temple of Ramesses III.
Most Sea Peoples’ warriors are depicted wearing the feather crowns as their characteristic headdress. (© Rosemary Robertson)
Representation of captured Sea Peoples (feather crown carriers) at the mortuary temple of Ramses III.

After 1250 BCE rulers in Greece and Asia Minor seem to have prepared their residences for hostilities. Shortly thereafter a wave of attacks ran from west to east, eventually leading to the downfall of the Hittite empire, which does not appear to have been as overpowering at that time as is often portrayed.

After the Mycenaeans had wrested control of maritime trade from Minoan Crete around 1430 BCE, a time of prosperity began for the Greek mainland lasting nearly 200 years. Around 1250 BCE, however, political unrest became evident. Large citadels were built and old residences were fortified, not just in Greece but also in Asia Minor, possibly in anticipation of imminent hostilities.

A wave of destruction spread across the Eastern Mediterranean sometime thereafter, and many urban centers and in particular their palaces fell victim. Dozens of port cities in Cyprus, Syria and Palestine were destroyed. Apparently the capital Hattuša was wiped out overnight – and with it the Hittite Empire. And yet, the Sea Peoples’ invasions marked only the beginning of the great upheaval. Later, Troy went up in flames and despite partial reconstruction was condemned to insignificance thereafter. The Mycenaean palaces of the kings in Mycenae, Tiryns, Pylos and other locations in mainland Greece also perished in the seemingly all-encompassing devastation.

The destruction recorded in archaeological remains is also reflected in documents that originated at the time. Well known is a letter from the king of Ugarit to his royal colleague on Cyprus:

In one of the last inscriptions from Hattuša Suppiluliuma II boasts how he defeated the attackers:

I, Suppiluliuma, the Great King, immediately reached the sea. The ships of Alasiya met me in the sea three times for battle, and I smote them; and I seized the ships and set fire to them in the sea. But when I arrived on dry land, the enemies from Alasiya came in multitude against me for battle.

In the end, however, it was the Hittite Kingdom that fell. A causal connection between enemy attack and the demise of the Hittites seems therefore likely.

The political situation in Asia Minor around 1200 BCE is usually visualized in the form of a map in which almost all of Anatolia was controlled by the Great King of Hatti, either directly or through vassal treaties. The Great King himself would have been overjoyed if this had really been the case. In fact, the core Hittite Kingdom and the region where Hittite was spoken were actually quite small.

Most importantly, Hatti had always been surrounded by neighbors who tended to be oppositional and hostile. Towards the end of the 13th century BCE, the situation threatened to get out of hand. The north was constantly dangerous because of the hordes of Kaška and Azzi, who were never well-disposed towards the Great King. In the east Mitanni pressed on towards Hittite territory; at times they seized control of the major copper deposits of Ergani Maden in Išuwa near the upper Euphrates. The situation in the south was particularly challenging. Kizzuwatna had been a devoted vassal for generations. Now, it rebelled against the empire and was openly hostile. And finally, in the west, it was necessary to use a kind of chief vassal to lead the petty kingdoms. Perhaps the king of Mira assumed this task because Mira was then the largest and most influential country in the west. The Great King of Hatti thus became highly dependent, because if his chief vassal refused allegiance it could mean the end of the empire. And this is exactly what appears to have happened.

Perhaps the trigger for the decision to engage in war was the conquest of Cyprus. Tudhaliya IV unexpectedly attacked the island, possibly to get access to its copper resources. For the first time the Hittite army was using ships for its raids. The Luwian kingdoms in western Asia Minor played an active role in long-distance trade and may have depended on Cyprus as a port of call. At the same time they were rarely truly loyal to the Hittite king, even when they were committed as vassals. Hatti may have gone too far by conquering Cyprus and throwing long-distance trade into disarray. None of the Luwian petty kingdoms could stand against the Hittite forces on their own, but united they had a chance to throw off their oppressors.

The Luwians therefore entered into a military alliance and built a fleet of fast, agile vessels for invasions. Instead of moving against the Hittite forces over land, they now dashed across the sea and quickly reached the important Hittite borderlands of Cyprus and Syria. Seemingly overnight, the acclaimed mercenary armies of the Lukka and Sherden had become marine forces which no longer fought alongside the Hittite king but against him – they had formed the coalition known as the Sea Peoples.

Suppiluliuma II now led the government in Hatti. He found himself exposed to large, well-prepared attacks in the south, something he could hardly have been ready for. For the first time in the history of the Hittite Empire, the king’s forces had to engage in naval battles, even three in succession. These may have ended undecidedly, because the two opponents later faced each other on land. The marauding Luwian “Sea Peoples” eventually received support from the Black Sea region. A wave of destruction rolled from the north towards Hattuša. The Kaška had taken advantage of the preoccupation of the Hittite armies and were themselves blazing a trail towards the capital. When they arrived, the city had been evacuated: If nothing else, the smoke caused by conflagrations on the horizon should have warned the inhabitants. They had escaped, and carried with them whatever was portable. All the conquerors could do was to set fire to the temples and government buildings.

Of course, the Hittite troops fighting in the south heard that the capital had been captured. Somewhere on the battlefield the Great King may have fallen, whereupon his soldiers lost their fighting spirit. In this way, the Hittite hegemony over central Asia Minor reached an unspectacular end. It had lasted a little over 400 years – and it would be 3000 years before it would resurface again.

As for the foreign countries, they made a conspiracy in their islands. All at once the lands were on the move, scattered in war. No country could stand before their arms, from Hatti, Kode [Kizzuwatna], Carchemish, Arzawa and Alashiya. They were cut off. A camp was set up in one place in Amurru. They desolated its people, and its land was like that which has never come into being. They were advancing on Egypt while the flame was prepared before them. Their league was Peleset, Tjeker, Shekelesh, Denyen and Weshesh, united lands. They laid their hands upon the land to the very circuit of the earth, their hearts confident and trusting: “Our plans will succeed.”

The Lukka Lands and Arzawa were the focus of the unrest. In the strong Egyptian phrase they “quivered in their bodies”.

The Arzawan countries may sometimes have combined their forces for large-scale military operations, particularly against powerful enemies like the Hittites.

Indeed it is quite possible that all groups listed in the Egyptian records originated in Anatolia, particularly western Anatolia.

It is also a known fact in the history of ancient Asia Minor that neighbors or vassals of the Hittite Empire often became particularly dangerous if changes in domestic politics were looming in Hatti.

There is, however, one document that seems to indicate that a western Anatolian state achieved approximate parity with the Hittite Empire in the last years of its existence.

Nevertheless the western Anatolian region may well have provided the genesis for the movements of the “Sea Peoples”. For this seems to have been the region where the political structures established by the major Bronze Age powers first began to crumble and disintegrate.

Starved and exhausted by the futile struggle against the sea-borne enemy in the south, she [Hattuša] became an easy prey for the hordes of the Kaška and the Muški sweeping from north and west.