The Lower Town of Troy 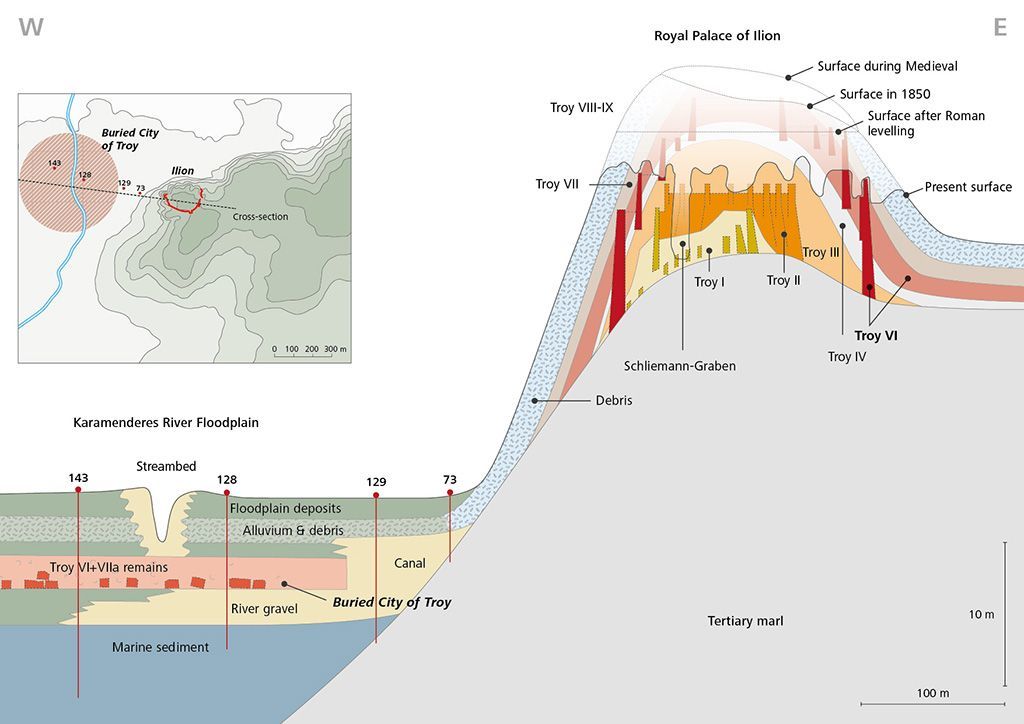 For decades scientists were convinced that Troy was modest in size. The excavator Manfred Korfmann initially shared this conviction but later changed his views, thereby triggering a fierce controversy especially among German archaeologists. Impressive remains of a lower town were never found. Perhaps people were looking in the wrong place: the lower city may not have continued right outside the citadel walls. Many sources from antiquity indicate that it was located further down in the plain, where it was buried under a few meters of mud. Drill holes have produced artefact-rich layers five meters below the present surface.

Heinrich Schliemann came to the conclusion early on that prehistoric Troy was precisely limited to the extent of the excavations he led himself. The limited size of just 180 by 160 meters, however, strongly contradicts all historical descriptions of the city. As a consequence, Schliemann was much criticized throughout his life; scholars outright rejected the identification of the archaeological site with the vision of Troy as celebrated by Homer.

After Schliemann’s death in 1890, more people started believing that Troy could indeed have been modest in size. In the 1960s, Kurt Bittel, then president of the German Archaeological Institute and long-time excavator of Hattuša, even argued that Troy had merely been a pirates’ nest. The British archaeologist John Bintliff went further still and claimed that Troy was only a fishing village, inhabited by no more than a hundred souls. Manfred Korfmann followed the prevailing zeitgeist when he became excavator of Troy in 1988. At conferences, in personal conversations, in media interviews and in scientific publications, he played down the importance of Troy and echoed Bittel’s notion of a “pirates’ nest.”

In April of 1991, Korfmann fundamentally changed his mind regarding the size of Troy. From then on, until his death in 2005, the size and importance of Troy grew in his point of view, in several steps, until the known parts of the settlement had become as much as twenty times larger than previously imagined. The excavator argued that a densely populated lower town extended right outside the fortress walls of Troy VI, even though excavations had revealed very few building remains there. It was these assumptions regarding the size and importance of Troy that provoked much controversy and eventually led to a fierce scholarly dispute. This controversy was fought out primarily between Korfmann on one side and his peer in Tübingen, historian Frank Kolb, on the other.

In 1993, during geophysical prospecting, Helmut Becker, a geophysicist from Munich, discovered an anomaly that Manfred Korfmann initially interpreted as a mudbrick wall with wooden defense towers belonging to Troy VI. From his perspective, it was built as a proof of power and had collapsed after a disastrous fire. Excavations conducted during the following year, however, showed that the anomaly was caused by nothing more than an artificial incision into the bedrock, a ditch. This nearly 4-meter wide trench lies about 400 meters outside the acropolis. Soon a second similar trench was found still further outside. The investigation of the trench monopolized the excavators’ capacity for almost twenty years, without leading to significant new insights. Manfred Korfmann and his successor Ernst Pernicka interpreted it as an obstruction for approaching chariots.

Twenty years of excavations in the palace garden

Korfmann’s about-turn regarding the size of Troy in April 1991 coincides with the first meeting he and the geoarchaeologist Eberhard Zangger had. That summer, Korfmann encouraged Ilhan Kayan to investigate the artificial trenches and canals that were known in the landscape around Troy. He also began searching for a lower town outside the citadel using geophysical prospection. The function of the trenches that were soon found during the prospection can be guessed by their contents. If the contents were arrowheads, bronze weapons, bone fragments and remains of chariot wheels, they would argue in favor of defense as a purpose; but the excavators did not find such things on Hisarlık. Instead, they found pollen from many different, even exotic plants in the trenches. Also, a complete skeleton of a bull was preserved in one place inside the trench. It is thus conceivable that the citadel of Troy VI was indeed surrounded by a large palace garden – this would explain why hardly any traces of buildings were found outside the citadel. The trenches may then have kept sacred bulls (which were allowed to roam around freely in parts of the park) from running away. They could also have provided symbolic protection and may have been meant to keep evil spirits away. This would explain why in Homer’s Iliad, Achilles dragged the corpse of Hector around the city walls, because in doing so he broke the spell over Troy and the city was henceforth destined to fall.

The royal residences of the sixth and seventh city of Troy stood on concentric terraces, so that the innermost district was of a circular construction. This round structure continued in the trenches outside the fortress walls. In antiquity, concentric rings in the form of a labyrinth were in fact closely connected with Troy. Engravings on a wine jug from the Roman city of Tragliatella (around 620 BCE) depict a ceremonial “Troy dance” that was mainly performed when cities in early Italy were founded, and then, significantly, before the city walls were to be erected. Hundreds of stone labyrinths in England and Scandinavia bear names related to Troy, ranging from Troy Town to Trelleborg. Half a century ago, some experts assumed that a maze-like structure would eventually be discovered in the city plan of Troy. It is quite possible that this circular city plan also continued in the floodplain below the castle – and down there the trenches could have taken the form of navigable canals.

Texts from antiquity to the late Middle Ages indicate that the actual city of Troy extended into the plain beneath the citadel of Ilion (Diodorus 4.75.3; William Gell 1804, 121). The living quarters of the population, craftsmen’s workshops, garrisons and port districts are likely to have been located down there. Various sources describe how the remains of the city, after its destruction by the Greeks, literally disappeared under water and mud (Strabo 1.3.17; Dio Chrysostom 11.76; Quintus of Smyrna 14.646–652; Homer, Iliad 12.16–33; see also Plato, Timaeus 25d). During almost 150 years of research history in Troy, however, all excavations have been restricted to the hill of Hisarlık, which due to its elevation was never affected by mudflows. In other words, the actual lower city of Troy may indeed still lie hidden in the plain underneath a layer of gravel and alluvial silt. Approximately 300 drill holes that were made by Ilhan Kayan to investigate the plain’s stratigraphy produced thick layers with artifact-rich deposits. Accordingly, the buried lower city of Troy may already have been found in the floodplain. Archaeologists looking for the remains of the actual city of Troy may only need to dig a mere 5- to 6-meter trench 300 meters west of Hisarlık – and they are likely to make a breakthrough discovery surpassing that of Heinrich Schliemann.

I now therefore assert most positively that Troy was limited to the small surface of this hill; that its area is accurately marked by its great surrounding wall, laid open by me in many places.

Before the house near the courtyard was an enclosure, widespread, four acres of trees heavy with fresh fruit … Such was the shady garden. Hard by, a brook divided in two runnels; from this the people drew their drinking, from that the gardener cut up the water into many curving channels and carried it from plant to plant.

In the reign of Ericthonius, the city of the Trojans was either in another situation, or covered only the upper part of the hill; … but when Tros, his son, ascended the throne, the people were so multiplied that they began to overspread the declivity, and the additional town was called Troy, in honour of that prince.

They say the old radius (wall) of Troy had amounted to 60 stadia.

Carl Gotthold Lenz 1798, 305, quoting Codex Venetus A (22.208), which in turn refers to Diocles (probably of Peparethus, 4th century BCE). Accordingly, Troy would have been about 180 times larger than the citadel of Troy VI.

It appears then that both the Salian dance and the Troia [dance] were meant by their intricate armed movements to strengthen the defence of a city by supernatural means … The actions must have been thought to create an additional and abstract wall of power to exclude hostile influence.

I might not be far wrong should I describe Troy as a pirate fortress which exercised control over the straits. … The representation of Troia sketched above definitely corresponded to what was thought about it then.

The city was indeed unusually large for its time (!).

How important the symbols of Troy’s power were, even a voluble tongue cannot easily describe: kings were terrified when they heard its name, generals trembled before its command. Wealthy, an empire with many districts, royal castle of the kings, famous residence of noble men, parade of generals. Who would have thought that a city defended with so many peoples and towers would be taken by siege? The invincible collapsed completely and there was nothing left of her; burned she lies on the ground, they did not even have a name for her [anymore]. She collapsed, giving the world a tremendous example that the present hour is not safely reliable. For it is now a tilth where Troy once stood, and the rich soil that needs to be processed with the sickle, is bristling with Phrygian blood.