Theory on Luwians and Sea Peoples’ Invasions: A Sequence of Events 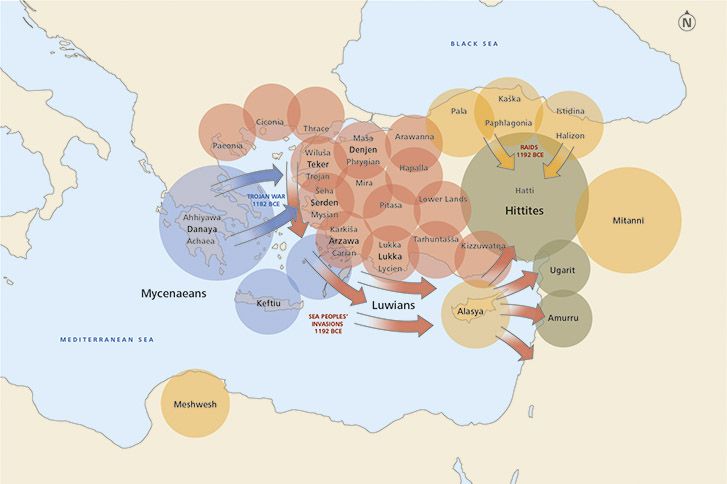 The Spiegel article by Frank Thadeusz on the revelations found in James Mellaart’s former study says of Eberhard Zangger’s ideas that “his theory about the Luwians, inflated with much steam, has shrunk to the size of a wrinkled balloon.” A number of media – including Wikipedia authors – have adopted this opinion. They write, for example, that Mellaart’s documents were “an essential support of Zangger’s thesis that a Luwian confederation is responsible for the Sea Peoples’ invasion and the demise of several great kingdoms of the Bronze Age”.

This is, however, not the case. Zangger’s theory has two components: firstly, the fact that over 400 hitherto unexplored Late Bronze Age settlements exist in western Asia Minor (when combined making up an entire civilization); secondly, the notion that the so-called Sea Peoples could have originated in this region.

Zangger’s theories about the Sea Peoples’ invasions date back to a time before he was in contact with James Mellaart, and have not changed much since. Zangger and Mellaart, like dozens of other researchers, independently recognized that the origin of the Sea Peoples may have been in western Asia Minor.

Here is a brief overview of the sequence of events.

April 1994: Eberhard Zangger publishes the book Ein neuer Kampf um Troia with Droemer Verlag in Munich. The 352-page volume revolves around the author’s theory that the Sea Peoples came from western Asia Minor. Zangger is the first to offer a hypothetical reconstruction of events in the eastern Mediterranean during the 13th century BC.

May 1995: The journal Aramco World features a cover story by Eberhard Zangger with a popular scientific summary of his theses on the Sea Peoples’ invasion.

July/August 1995: James Mellaart, who subscribes to Aramco World, writes two letters to Eberhard Zangger, totaling 22 pages, telling him that he has been pursuing similar ideas since 1951. He says that he even possesses English translations of unpublished documents which would support these ideas. These were allegedly found at the end of the 19th century in the village of Beyköy near Afyon. The documents consist of bronze plates with cuneiform texts in the Hittite language which have not been published until today. Mellaart summarizes the contents of these “Beyköy Texts” in his letters. His handwriting, however, is difficult to read, and the content extremely complicated. Eberhard Zangger writes a gloss on this story for edge.org at the end of 1999, but will not pursue it for another 22 years. Zangger does not make use of the contents of these letters until October 2017.

December 2015: Eberhard Zangger meets prehistorian James Mellaart’s son Alan by chance in a bookstore in Istanbul. In their conversation, Zangger mentions the letters set to him by James Mellaart, who had died in 2012.

February 2017: Eberhard Zangger hands over Mellaart’s 1995 letters to the Dutch linguist Fred Woudhuizen, who transcribes them so that they can be easily read for the first time. Zangger and Woudhuizen jointly evaluate the letters.

April 2017: Alan Mellaart informs Eberhard Zangger that he has located the English translations of Bronze Age cuneiform texts that his father mentioned in 1995.

May 2017: Zangger submits the manuscript for the book Die Luwier und der Trojanische Krieg to Orell Füssli Verlag in Zurich. It contains a three-page summary (pp. 224-6) of the contents of James Mellaart’s letters of 1995. However, the reconstruction of events at the end of the Bronze Age presented in the new book contrasts sharply with Zangger’s previous theses.

June 2017: In his parents’ former home, Alan Mellaart hands over to Eberhard Zangger a pile of documents that his father identified as particularly important for evaluation and publication. The so-called “Beyköy Texts” make up the lion’s share of the translations. Zangger, however, leaves this material aside, and has not read it to this day. Instead he focuses on the drawings of various Luwian hieroglyphic inscriptions that are also in the stack. The largest of them, like the cuneiform texts, is said to come from Beyköy. Zangger sends this hieroglyphic inscription to Fred Woudhuizen for evaluation. Woudhuizen immediately recognizes that it provides a summary of events at the end of the Bronze Age, which is in fact practically identical to the theses on the Sea Peoples’ invasion that Zangger had presented in 1994. Zangger and Woudhuizen decide to publish the Luwian hieroglyphic inscriptions. It is not until the spring of 2018 that they learn that the large inscription (“Beyköy 2”) had already been presented at an international conference in Ghent in 1989.

October 2017: The book Die Luwier und der Trojanische Krieg appears. The publisher allows the author to attach an 18-page chapter on the latest discoveries in James Mellaart’s estate, which also features the large Luwian hieroglyphic inscription for the first time.

November 2017: The board of the Luwian Studies Foundation decides to support the investigation and publication of the documents from the estate of James Mellaart.

December 2017: An online version of the publication of the Luwian hieroglyphic inscriptions appears in TALANTA – Proceedings of the Dutch Archaeological and Historic Society.

7 February 2018: An international interdisciplinary team of scientists meets in Zurich to discuss an approach to investigating and publishing the documents from James Mellaart’s estate. Initially, however, it is decided to search for further evidence as to whether the documents are real or not.

24 February 2018: Alan Mellaart and Eberhard Zangger meet again in James Mellaart’s former apartment in London. James Mellaart’s documents occupy two rooms of the apartment and two garages. After four days of intensively screening the estate, Zangger finds a dossier that unequivocally proves how James Mellaart himself constructed the English translations of the alleged cuneiform documents (“Beyköy Texts”). Zangger has already come across sketches of alleged murals from Çatalhöyük that were carved on schist slates.

1 March 2018: Luwian Studies posts a media release on its website announcing that Mellaart fabricated alleged historical documents, the recently “discovered” murals from Çatalhöyük and the supposed cuneiform “Beyköy Texts”. These items and Zangger’s theses on the Luwian culture in West Asia Minor and the Sea People’s invasions are not related, having originated completely independently of each other.