Why are the Luwians Missing? 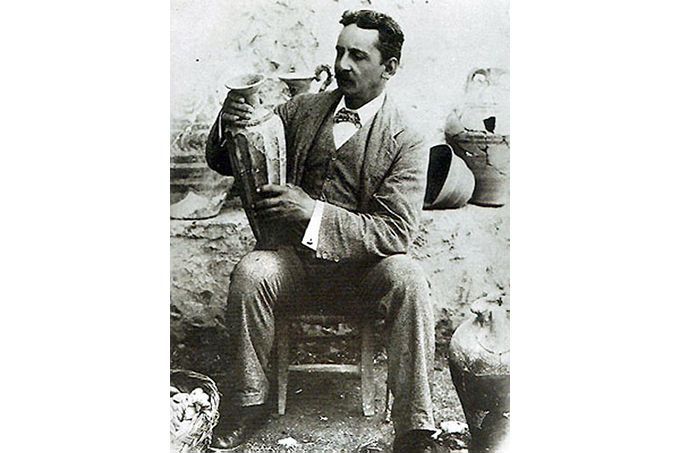 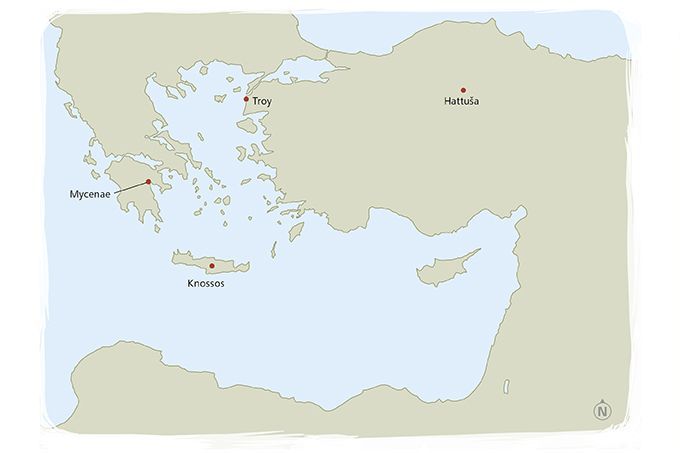 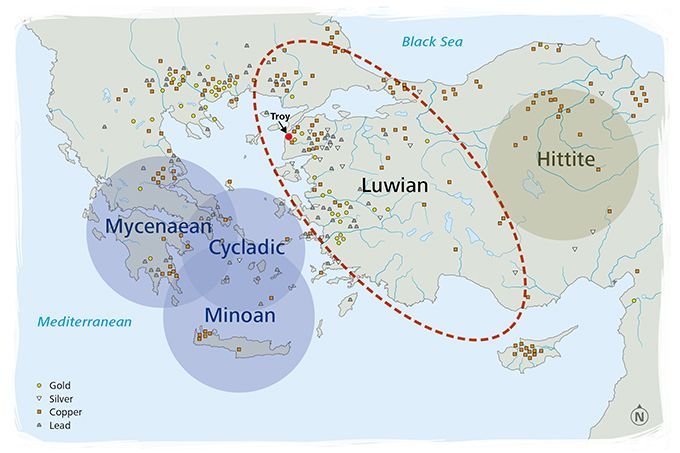 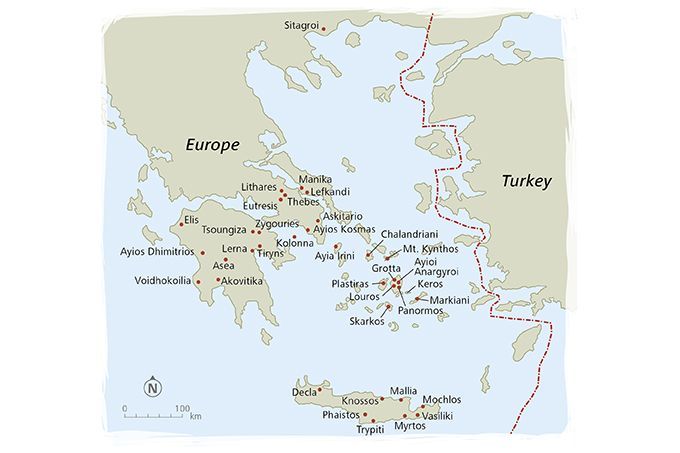 Sir Arthur Evans, excavator of Knossos.
Between 1870 and 1910, archaeologists excavated Troy, Mycenae, Knossos, and Hattuša.
When Arthur Evans in his publications laid the foundation for Aegean Prehistory, he only included cultures within the borders of Europe.
Distribution of Middle Bronze Age sites according to a textbook of Aegean Prehistory from 1994. Western Asia Minor is terra incognita.

The comprehensive study of Bronze Age sites in Greece and Turkey began in the late 19th century. At the time philhellenism was popular in Germany. As a consequence of this fashionable ideology and the prevailing conflicts with the Ottoman Empire, researchers focused their efforts on Greece. That a great enthusiasm for all things Trojan had once dominated the central European zeitgeist for two thousand years was entirely forgotten.

Between 1870 and 1910, western European scholars and adventurers discovered a number of important archaeological sites in Turkey and Greece whose habitation predated the beginning of European historiography by about a thousand years. Funded and directed by German businessman Heinrich Schliemann, excavations on the hill Hisarlık (Turkish for “settlement hill with castle”) began in northwest Asia Minor, where various geologists and amateur researchers thought that Troy must have been. Encouraged by his early successes in Turkey, Schliemann then launched excavations in Greece as well.

After Crete gained autonomy from the Ottoman Empire in 1898, around a dozen excavations began on the island. Chief among them was the investigation of Knossos, led by the British archaeologist Arthur Evans. In 1906, Berlin-based Assyriologist Hugo Winckler initiated excavations in Hattuša located in central Asia Minor. Through the exploration of Troy, Mycenae, Knossos, Hattuša and many other sites, cultures came to light that had existed over a millennium prior to classical antiquity.

Soon archaeologists faced the task of structuring the newly acquired knowledge concerning these early Aegean cultures. In his publications after 1920, Arthur Evans created a still largely valid, three-part chronology (Early, Middle, Late) for the 3rd and 2nd millennium BCE, and thus laid the very foundation for the new discipline Aegean prehistory. Evans set out to cover three large regions: Asia Minor, mainland Greece and Crete. For each of these regions, a cultural center was already well known: Troy, Mycenae, and Knossos respectively. Evans also ended up defining three civilizations; however, only two of those coincided with the regions and centers listed above. Knossos was, of course, the center of the Minoan civilization, and Mycenae the one of the Mycenaean. But Troy remained isolated. Instead of assigning a civilization to Troy, Evans gave the Aegean islands their own culture, even though they had no capital and were not really powerful during the 2nd millennium BCE. For the time being, Hattuša was also left out of the equation.

Fierce fighting raged between Greece and Turkey around 1920, when Arthur Evans conceived the chronology for Aegean prehistory. Given these circumstances, it would not have occurred to a philhellenist like Evans to direct scholarly attention to any culture on Turkish soil. As a result, even though Troy was and is by far the world’s most famous stratified archaeological site, it remained isolated.

Because of this omission almost a hundred years ago, there is virtually no other place in the world today to match the potential for discovery inherent in western Asia Minor. All this time, an entire culture has remained largely hidden from the eyes of archaeologists. The memory of the Luwians, however, has been preserved in many documents in Greece, Asia Minor and Egypt. Many hundred archaeological sites are now waiting to be systematically explored.

The Luwians played a key role in the development of Western Europe. Their culture provided the breeding ground for Greek philosophy, poetry and science. For over a thousand years, Western Europeans tried to trace their roots back to the royal family of Troy. Hundreds of cities in Europe – including Rome, Paris and London – claimed to have been built according to the model of Troy.

This enthusiasm for all things Trojan gradually transformed into complete rejection after the Ottomans conquered Constantinople (1453) and even besieged Vienna (1683). After that, the intellectual elite of Central Europe no longer wanted to be regarded as descendants of the Trojans. Instead, they came up with a new historical role model − Ancient Greece and Rome − most likely because these cultures once ruled over large regions in the Eastern Mediterranean. Suddenly anyone who did not speak Greek was considered a barbarian.

Since the end of the Second World War, such ideologies founded on racial prejudices have been considered unacceptable. Subliminally, however, they have subtly persisted, holding back research on early Anatolian civilizations. As a result, distortions and knowledge gaps arose that are now gradually being filled.

From the mid-19th century the romantic philhellenism was joined by an ideological hard core of Euro-centric racism, whose formation in Europe accompanied the colonial reaching out to overseas: Only Europe could and may have produced the roots of Western civilization, this was the general belief.

I don’t choose to be told by every barbarian I meet that he is a man and a brother. I believe in the existence of inferior races, and would like to see them exterminated.

In archaeology, Evan’s word was law … The few scholars who dared to question him met with swift and certain professional punishment.

The for centuries rotting peoples and states of the Semites and Egyptians, despite their ancient culture, had nothing to leave to the Greeks apart from a few manual skills and techniques, vulgar costumes and utensils, outdated ornaments, disgusting fetishes for even more disgusting false gods.

[Aphrodisias’] innate fabric plus its shared features not only with the southwest but with northwestern Anatolia and the Aegean proves that its world had a fundamental unity that we have just begun to understand.